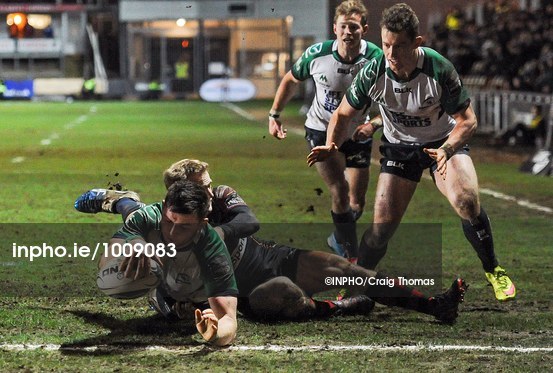 This felt significant, really significant. After heartbreaking narrow defeats in Cardiff and Llanelli in recent months, Connacht dug out a thrilling come-from-behind victory in Newport last Thursday night. A win that included four well crafted tries and a perilous defensive stand in the dying seconds to cement their current standing among the top four in the PRO12.

Leaving aside all else, this means that Connacht now have nine wins from their 14 league outings so far this season as they edge closer to securing, at the very least, a spot in the top six of the standings and therefore a place in European rugby’s elite competition for next season. There’s work to be done and elements of their performances need polishing but Pat Lam’s side are soaring right now.

It’s been a campaign for taking advantage of opportunities and Connacht are excelling in that department. In this one, they hardly dominated and by the 60 minute mark trailed 21-14. They seemed to be in a real hole. Yet the introduction of the likes of Ultan Dillane, Eoin McKeon and Kieran Marmion from the bench galvanised and inspired the cause and drove them to victory.

The Dragons had the answers in the first half at least. While Connacht scored first through a neatly crafted try for Matt Healy after Caolin Blade linked with John Muldoon on a clever move from a scrum, the hosts hit back with a try from Adam Hughes when he blocked a Blade clearance kick and chased it down for the score.

As the high tempo start continued, back came Connacht with a Tiernan O’Halloran try after a lineout and maul garnered the momentum for a sweeping backs move. Yet young Dragons star Ashton Hewitt notched his sixth try in his last nine appearances soon after the hosts led 15-14 at half time. Before two penalties replacement out half Angus O’Brien stretched the lead to seven.

The problems were mounting for Connacht. Home scrum half Sarel Pretorius was at his very best, probing and sparking, emerging young out half O’Brien had come on for the injured Jason Tovey early but was winning the in-game kicking duel and the back row of Ben White, Nic Cudd and Nick Crosswell were in fine form.

Yet the final quarter of this game summed up what Connacht are all about at the moment. The impact of the bench certainly told a tale but the ability to figure out the problem and find a solution was key as the Connacht maul took shape. Substitute Finlay Bealham sorted out some initial issue at scrum time and Marmion cancelled out some of the dominance around the fringes.

The result of all this was two tries in a seven minute span. The first from Eoghan Masterson after the Laois native tore off the back of an advancing maul for a fine score. The second came from another rampaging charge from the pack which set them up five metres from the line for Bundee Aki to power over at pace. It was thrilling stuff.

In the closings stages, the decision making wasn’t quite as sharp from Lam’s men. With five minutes to go, having won a free kick on the ten metre line, Aj MacGinty inexplicably chose not to kick it deep but instead to launched a tepid garryowen which barely travelled ten metres. A miss control and penalty ensued and within seconds Connacht found themselves five metres from their own line, defending a maul.

The counter drive on that subsequent catch, drive and maul from the visiting pack was a sight to behold. Under Jimmy Duffy this season the forwards have progressed well in this area and everywhere they travel, the Connacht maul is picked out by opposing coaches as a key weapon and something to emulate. It halted the Dragons drive here and proved key on the late defensive stand.

So where to now? Well before the season cranks up a notch post 6 Nations in late March, Connacht have a huge opportunity to open up some daylight between themselves and seventh spot. A struggling Zebre in Parma are next up, shorn of their Italian internationals. Then a tricky but absolutely vital home tie against sixth placed Ospreys follows before a trip to fifth ranked Edinburgh. All without key components for those fixtures.

And there’s further good news, as even if Ultan Dillane, Kieran Marmion and Finlay Bealham join Robbie Henshaw and Nathan White in the Irish match day squad at any point in the next few weeks, Ben Marshall is back from injury as second row cover, John Cooney is on the mend and Denis Buckley, Rodney Ah You and Ronan Loughney are in fine form in the front row.

So a maximum ten point return from two testing encounters against Welsh regions in the last two rounds and it seems to suggest the momentum is with the westerners as they move into these next three games.

Once that is all done, it’s the business time of the season. Leinster at home, Ulster away, a European quarter final, Munster at home, and on from there. Daunting, but easier when you’re at the front of the grid before the chequered flag drops.