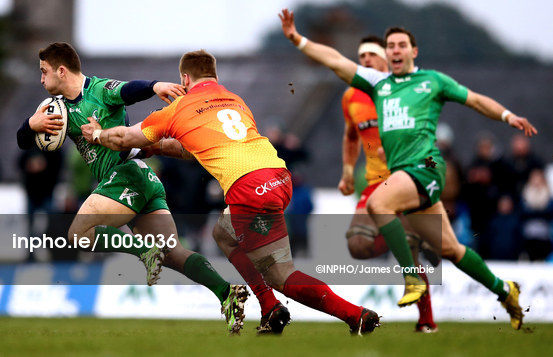 The sheer domination told a tale. Connacht’s forwards demolished the Scarlets at the weekend. The Welsh side were missing a first choice front row and one key back rower but that hardly is an excuse for the way the leading Welsh region were steamrolled in the pack from start to finish at the Sportsground on Saturday.

The Llanelli men brought a backline humming with talent. That backline kept them alive in the contest for a lot longer than you might have expected. Yet with a scrum going backwards and a maul defence that was quite simply inadequate, Connacht’s young and energetic forwards set the tempo from the get go and the westerners never looked back.

These Saturday afternoon kick offs seem to be extremely popular with the supporters judging by the bumper attendance, officially at 5,292. There was constant noise and energy bellowing out from both stands throughout. The importance of this fixture was not lost on the green army and they made that known from an early stage.

This was a must win. After the heartbreaking defeat in Parc Y Scarlets earlier this month and a run of four straight PRO12 reversals, there was no room for another slip. That reality seemed to be abundantly clear to the players and they started at 100 miles an hour.

The contest itself had three main segments. A first half where Connacht largely dominated and led 13-0 thanks to two Jake Heenan tries after sustained pressure led to five metre lineouts and an unstoppable maul. The west Wales outfit had their moments but Connacht’s defence held firm. The only blot on the scorecard were three missed kicks from the otherwise on song Jack Carty, two had hit the post.

After half time, disaster struck as the Scarlets scored ten points in five minutes. A penalty from Aled Thomas and a try off a turnover on half way finished off by DTH Van Der Merwe. The visitors were seemingly back on track, or so we thought.

Connacht’s reaction was to get right back into gear, with the dominant front row of Denis Buckley, Tom McCartney and new Ireland call up Finlay Bealham earning a quick penalty and a sin bin for Phil John. Second row Tom Price followed his prop forward to the bin soon after for a high tackle on Caolin Blade and the platform was set.

Over the next 15 minutes, Connacht put the game firmly to bed with another catch and drive from a lineout leading the fourth try. This time with Buckley touching down after Heenan caught at the back. Powerful work from John Muldoon, George Naoupu and Eoghan Masterson played a part in that.

The bonus point try came from replacement prop Rodney Ah You, who won back some hearts and minds after announcing he’s leaving Connacht for Ulster with a memorable charge over the line from close range and a beaming celebration to go with it.

The Scarlets did finish with a flurry. Gareth Owen’s try made things a little hairy and right at the end. The visitors were in the Connacht 22 looking for another converted try that would have secured a very important losing bonus point. The visibly tiring Connacht side refused to budge and held out to the end to be greeted by a cheer as big as any the venue has heard in a non inter-provincial PRO12 contest.

Joint top of the table

The result moved Connacht joint top of the table on 40 points with nine rounds remaining. Teams below like Ulster, Leinster and Glasgow have games in hand and the difference between first and sixth is just four points. In short, no one is getting carried away just yet but Lam’s men are very much back on track.

There can be no question, that this PRO12 season has been unorthodox in the extreme. Connacht have benefited from having stability in their squad when all others have been disrupted and the true test of Lam’s side will be in April when they face their three inter-provincial rivals in this competition and Grenoble in Europe.

Yet this young Connacht outfit are delivering like never before in the games they should win. In the games where they match up well on paper, they seem to deliver on the field.

Four more such games lie ahead during the Six Nations period starting with a tricky test in Newport on Thursday February 11th, followed by Zebre away, the Ospreys at home and Edinburgh away. Those games are likely to be very much on the target list.

Even in the absence of players like Robbie Henshaw, Nathan White and Kieran Marmion and who knows, perhaps even Ultan Dillane and Finlay Bealham too, Connacht match up well against their forthcoming opponents.

That’s a total of five Six Nations squad members with others knocking on the doors. Ireland’s only provincial European interest in April and a serious challenger for the top four in the PRO12. All is well in the Connacht camp and once again this season. They have delivered a big performance in a game when failure was not an option.