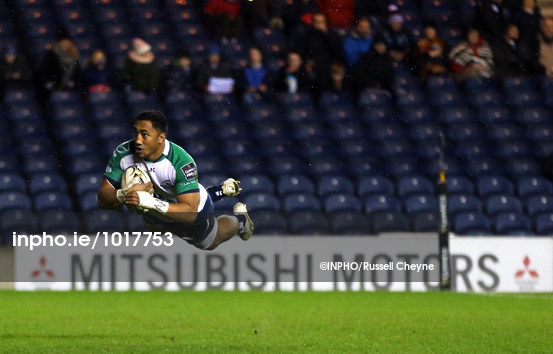 It might well be time for those of us who follow Connacht rugby to take a moment and reboot the mind so as to approach the final few games with a new mindset. It’s not going to be easy. The mesmerising offloads, multiple linebreaks, tries from every angle. Results that break record after record are literally jaw dropping at this stage. This team are going to be in a new world of trophy contenders for the next few months and it’s important we don’t all look like lost tourists.

The latest chapter in Scotland’s capital on Friday night turned out to be another barnstorming display from the most energetic, creative and eye catching side in the Pro12 this season. They are league leaders because of this, more tries, quite probably more defenders beaten and more offloads than any side in the league. A better brand of rugby than anything any side is producing and it all adds up to a record breaking run for Connacht.

Everyone knows what’s around the corner. After a two week break, Pat Lam’s side return to action on Easter Saturday to face Leinster in what is sure to be a top of the table clash now – whatever happens with the game in hand the men in blue play in Glasgow on March 18. That will be the start of a monumentally challenging run of inter-provincial games with a European quarter final in the mix too.

Most followers of Connacht rugby have held back on their targets for this side as a result of the Six Nations and World Cup disruptions this season. In PRO12 games where Connacht have faced full strength sides unaffected by international call ups the record is two wins (over Edinburgh home and Munster away) and four defeats (away to Cardiff, Leinster and Llanelli and at home to Ulster).

That trend is worth considering too in terms of providing context and caution for what lies ahead. It has been doing that for most of the spring. However, a run of five straight wins and 24 points from a possible 25 is making most followers check themselves and ask, why worry about whats to come? Their side is fully equipped, focused and more than capable of rising to the challenges that are on the horizon. Heck the aforementioned four defeats were all tight games that could have gone either way in dreadful weather.

So what are the stakes? Well the pot is enormous. The bookies will confirm that Connacht have a legitimate shot at two trophies this season. They’ve never won any silverware remember. Second favourites for the PRO12, by a whisker, behind Leinster. While they are outsiders in the Challenge Cup for now but that could all change with a win in Grenoble. Also, don’t forget, they are now all but guaranteed to qualify for the Champions Cup next year. That’s actually become an afterthought.

Friday’s performance in Murrayfield encapsulated the entire Connacht season in one frantic 80 minute spell. We had tries from all ends. Skill levels matching what you’d expect in the southern hemisphere. Injuries. A mini crisis in the middle where they clearly lost their way. A display of resolve and determination right at the end to halt Edinburgh’s comeback and seal the bonus point win just as the locals thought they had cracked the code.

The starting point was a surging first half and a 14-0 half time lead. Even that didn’t reflect Connacht’s dominance. Over 70% of the territory and 65% of possession belonged the the westerners in the opening half. Aj MacGinty got over for a try early on. He had another huge night, making two clean line breaks, beating five defenders, executing a couple of neat offloads and scoring his second try in as many games.

The second try came from a lineout and maul that proved to be a potent weapon as not only did it yield a try from Jake Heenan but it also forced Anton Bresler into pulling another one to the ground which led to a costly yellow card just before half time. At that point, Connacht probably should have finished off their opponents but hesitancy crept into their game and mistakes followed with Tiernan O’Halloran notching up a yellow card just before the break.

After half time, Edinburgh struck straight away with a try from Cornell Du Preez but they settled on that for a brief second and paid a costly price as the sheer inspirational Bundee Aki popped up with his fifth try of the season at a crucial juncture. The Kiwi centre is the talk of the PRO12 wherever Connacht travel and his stats back up a feeling that he’s the best in the league. For key tries in big games, there’s no one better.

The 20 minute spell that followed was a horror show for Connacht. Two tries and 15 unanswered points later, they found themselves in the 69th minute defending a lineout in their 22 with a one point lead and a bucket load of momentum against them. The sideline made some ruthless calls. Like replacing replacement Rodney Ah You after just 27 minutes and the players on the pitch led by the brilliant John Muldoon, got to grips with proceedings.

A mesmerising Tiernan O’Halloran break in midfield set up one final attack. From a scrum under the posts held steady by Denis Buckley and Finlay Bealham, Connacht caught Edinburgh napping and Eoin McKeon charged over for the bonus point try and a record breaking fifth away win of the season for the westerners.

For other highlights, look at at the tackle counts of Sean O’Brien, Jake Heenan and Aly Muldowney all on 13. The goal kicking of Craig Ronaldson (just one missed) before he picked up a worrying ankle knock. The massive turnovers and strong all round play of Quinn Roux on his return after a three month injury lay off.

It’s time to accept the new reality. Connacht are at the top table as the season creeps into the final few laps and they very much belong there. What happens next is not easy to predict but with the level of self belief, conviction and ability at an all time high, don’t rule anything out. We all need to get some rest, March, April and May are going to be busy months for everyone who cares about rugby in the west of Ireland.