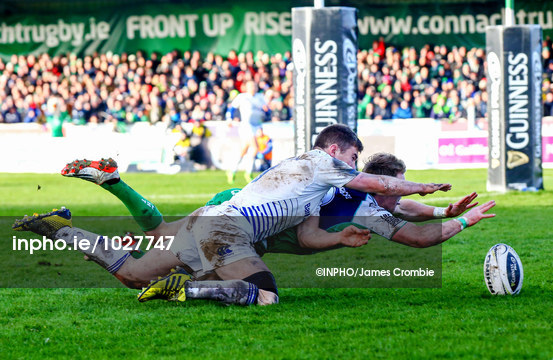 
If there were any doubters left, they were well and truly stumped late in the evening on Easter Saturday as the sold out Sportsground bounced to the ‘we are top of the league’ chant with more gusto than ever before. The roar that greeted the final whistle was almost primeval, with relief and ecstasy all rolled into one.

How did they dig that out? Logic was firmly against them as Leinster packed down with their first choice pack for a scrum just five short metres from the Connacht line and the home side prepared to repel the advance.

Yet when the front rows in that final scrum dropped for a second time only for referee Nigel Owens to holler at Eoin Reddan to “use it” owing to the fact that the ball was available to play at the feet of Jamie Heaslip, the odds shifted heavily in Connacht’s favour. All day, the Leinster backs had failed to even give a mild indication that they could unlock the Connacht defence, these last few seconds would be played out on Connacht terms.

Think of what stood in front of Ian Madigan as he received the ball from Reddan with his team trailing by a point and just 50 seconds on the clock. A wall. He shifted possession on to Ben Te’o who met the first wave, led by Robbie Henshaw, the most expensive property in Irish rugby this season and the right man for such a siege. Bang, back you go.

Wave number two met the same response and by the time Dominic Ryan attempted to dig the ball out of the ruck, Bundee Aki was now in the mix. He was the second anchor of the defence in this last ditch stand and he used his unmatchable energy and power to dislodge possession and send back on his side.

That brings us to the last 30 seconds. A half minute that encapsulates the character and the composure this Connacht team now has in spades. Having turned Leinster over two metres from the try line, the first inclination must have been to hoof the ball clear without a seconds thought.

Well for most teams, that would have made sense but with Caolin Blade marshalling the phases, a quick call was made. Let’s kill the last 30 seconds here, they seemed to say. Such a logical approach but with so much at stake, their ability to make the right decision at just the right time is one of the many elements that sets this Connacht team apart.

No element of this tale can be underestimated. The result, the manner in how it was achieved and the magnitude of what it does to change the perceived wisdom that has enveloped this competition from the very outset. This one was significant and it could well propel Connacht towards a top two finish and a home semi final.

Let’s tick off some boxes here. Top six is almost mathematically certain now. That’s automatic qualification for the European Cup for the very first time achieved. One more win from the final three games should book a place in the play offs for the first time. Two more wins could be enough for a home semi final thanks to a top two finish. Three will certainly do it. At that stage, all bets are off.

Every single player played their part here, one could write an article on the contribution of each and be left with plenty of extra material besides. The main hitters and the headline grabbers included Eoin McKeon with his 23 tackles and barnstorming carries as a late inclusion at seven for the injured Jake Heenan. He took man of the match.

Bundee Aki again underlined why he’s the best 13 in the league but at this stage the best signing the province has ever made. John Muldoon, Sean O’Brien, Denis Buckley, Aly Muldowney, Finlay Bealham from the bench, Kieran Marmion all excelled and dominated at times.

Away from the spotlight

On top of all that, perhaps away from the spotlight, Quinn Roux’s work in clearing out the breakdown was absolutely critical to Connacht’s ability to retain possession for long periods of the second half in their own half without giving away key turnovers. Young Peter Robb on his first start kept the shackles on Ben Te’o and made some strong gains too.

To complete the picture, the bench made the kind of impact Pat Lam has demanded for some time now. He places huge emphasis on the impact players made from the replacement and watching Dave Heffernan block clearance kicks, Ronan Loughney make key front foot carries or Caolin Blade slot into out half for ten desperate minutes underlined this perfectly.

The toll this will take on the bodies might define how far this team can go in the coming weeks. Three out halfs are down right no., Shane O’Leary is next in line and while his 20 minute cameo here was encouraging to say the least, the resources are stretched. Yet Ultan Dillane is due back. The front row options remain plentiful and Connacht travel to Belfast this Friday with nothing to lose and a licence to go for it.

It seems reasonable to assume that the Ulster management and players are more concerned than ever before at what lies ahead this weekend. The Connacht fixture has proven a bit of a straight forward encounter far too often in this league but they now face a team that fully believes they can end a 56 year wait for a win at Ravenhill and a team that will tun up in Belfast on Friday ready to attack from anywhere and offload at every opportunity. Hold onto your hats. There’s more to come.