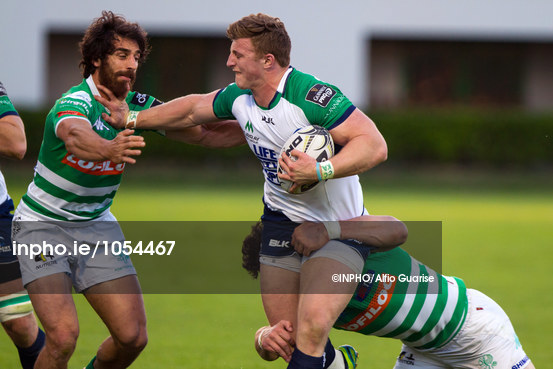 By Rob Murphy at Stadio Monigo

Friday’s defeat in Treviso won’t be easy to park because it could easily be classified as embarrassing. Here you had a top four team with a close to 70% win record coming into the game, losing to a struggling Italian outfit that had lost 90% of their games during the campaign. Just as the rest of the league were beginning to take Connacht’s title challenge seriously, the westerners serve this up and slip right off the radar again.

A lower profile might not be a bad thing though. The processes failed the men in green here in a disjointed chaotic performance. Pat Lam made ten changes, he may well regret some of the selection choices. Not much has changed as a result of the defeat here, a one point win over Glasgow and Connacht have a home semi final but this was about maintaining momentum and underlining the new culture.

Worse still, when one sees the statistics, Treviso had some good moments but without their strong scrum they would have been hammered here. The Italian side with just two wins in their previous 26 outings, ran out of gas in the last 20 minutes and their already abject skillset suffered more as a result. It was a case of knock-ons and loose passes galore but somehow, the rag tag bunch hung on.

Character and determination helped the home side but let’s not overplay that either. Treviso looked set to capitulate during the opening 20 minutes when trailing 14-0 down and offering nothing in attack. Yet the second scrum of the game yielded a huge penalty and a bucket load of momentum. Two tries followed before half time, another after half time and all of a sudden, they led 19-14 coming up to the hour mark.

At that point, the game was in the melting pot and the hosts had produced more than enough to suggest they could drive on and win yet Connacht hit back. Lam had kept key components on the bench, Finlay Bealham, Aly Muldowney and John Muldoon made a difference in the forwards, Robbie Henshaw, quite logically, was able to dominate in the backs and suddenly the visitors were on the front foot.

Peter Robb’s try was a brilliant score, TIernan O’Halloran, Niyi Adeolokun, John Cooney, Jake Heenan and others had a hand in a move that went through five rapid phases across both sides of the field and finished in the corner with the hugely talented tall centre reaching out to score.

The touchline conversion from Cooney had Connacht back in front 21-19 and looking in control. Another 20 minutes of domination should have yielded try number four and a result that would have put Lam’s men top and thanks to Leinster’s heavy defeat at Ulster, opened up the possibility of a losing bonus point proving enough for a home semi final. Alas, as Connacht went for broke (they shunned an easy three points to go for 5 with eight minutes left) they got caught with a sucker punch.

Treviso were almost out on their feet but as each Connacht visit to the 22 failed to yield a score in those closing stages, the hosts grew in hope and kept plugging away. The game should have been dead on 78 minutes when Connacht won a penalty on the edge of their own 22 but a sloppy lineout on halfway ensued and a poorly judged pass from Caolin Blade gave the hosts a chance at scrum time.

The scrum decided the game. Ulster bound Rodney Ah You had been destroyed at each scrum by 22 year old Matteo Zanusso in the opening hour and possibly as a result, loosehead Ronan Loughney suffered at the hands of Simone Ferrari. The set piece delivered nothing but problems. By the time of the last scrum, Bealham and JP Cooney were the combination but Treviso had all the momentum.

Jayden Hayward nailed the penalty that came from the buckling scrum just inside half way and Treviso had their win. The Connacht players looked dejected and shell shocked. This could prove to be a major wake up call or the first signs that this great season has already peaked. The loss of Denis Buckley and Nathan White for this crucial stage of the season combined with the complete absence of form from Ah You is proving to be the biggest problem the province has encountered.

There is a silver lining however. If Connacht can find the combination of front row forwards to survive, Loughney and Bealham might do it, then they still have the pace and ambition to test the title holders and competition favourites Glasgow in more ways than the Scottish side might anticipate. All is certainly not lost, Connacht are two home wins from a Pro12 final.