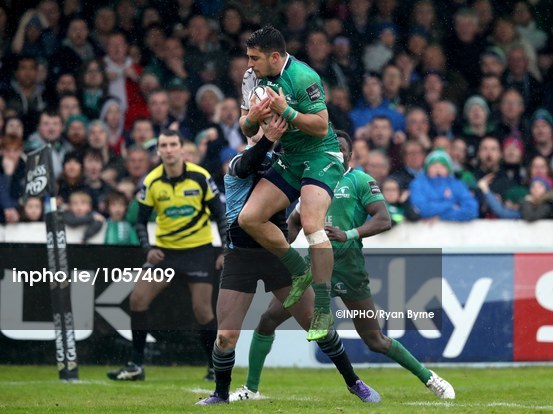 For a brief moment in the final five minutes of Saturday’s gripping end of season encounter at the Sportsground, we were treated to one of those moments where you have to stop and take it all in. Connacht were leading by seven. Glasgow were fighting for a draw that would secure home advantage in a play off semi final and it was all hands on deck at the saturated College road venue.

Packing down in the scrum in those closing minutes were Tom McCartney at loosehead prop. The Kiwi hooker was scrummaging for the first time in over half a decade because of all the injuries. Dave Heffernan at hooker, the industrious and unbreakable Ballina man was fourth choice at one point this year. And JP Cooney at tighthead, option number six for that role at the outset of the season.

That scrum held firm, didn’t shudder and provided the ball Eoin McKeon needed to burst off the back and get Connacht going again. That scrum epitomises a season where the westerners have completely re-written entire sections of the manual, .

In front of what must be the loudest PRO12 crowd of the season, Connacht delivered on their final objective. Having secured Champions Cup rugby weeks ago and a first ever top four play off position just last week. Saturday was about the top two and a home semi final, as it happens, it will be against Gregor Townsend’s Glasgow Warriors. The reigning champions will be a little wiser when they return in two weeks but no less beatable too.

Last season ended in late May away to Gloucester in Kingsholm. A play off game for Champions Cup rugby qualification after Connacht’s strong PRO12 campaign had yielded a seventh place league finish. We thought the 40-32 extra time defeat that night would remain etched in the memory for years to come but that heroic effort has been pushed way back in the memory banks. This team has determinedly ensured that.

After the game, the fears for the following campaign were very real. Connacht were not active in the market of signing new players. There appeared to be a deficit of talent in key positions and the chances of holding their seventh spot seemed difficult at best. At that point, no one could have believed that Pat Lam’s men were about to kick on to whole new level and reach the top two.

In Saturday’s 23, only one player wasn’t in Connacht’s squad at the start of last year. Aj MacGinty was signed in October after the world cup. That’s a key stat when trying to come to terms with what the management team including Dave Ellis, Andre Bell, Jimmy Duffy and Conor McPhillips have achieved here. Big money signings don’t fix all the problems. Connacht certainly spent some money in 2014 but then said, that’s enough. Time to put the work in too.

After the final whistle in Kingsholm last year, we wondered what might have to change next year. Bundee Aki had only shown sparks of what he was capable of but he still appeared to be lacking bite to his attacking play, a willingness to back himself. We thought Matt Healy with five PRO12 tries was peaking, we didn’t realise there was lots more in him including four more tries for the top scorer award.

That’s just two examples of the huge strides each individual has made, even from positions where major improvement wasn’t expected or foreseen. Aki crowned a truly outrageously good season with his sixth try of the campaign to kick start Saturday’s win. A bundling effort where he shrugged off four Glasgow players on a crash ball and found a way to touch down.

Aside from all the hair raising breaks, smash tackles and the vital leadership role with the younger Academy players, Aki has taken over from Mils Muliaina last year. He has done what every talisman should do and scored all of his tries at key junctures. Each of Aki’s six tries have come in the big, big wins for Connacht. For example, see Munster away, Ospreys away, the Dragons away and home ties with Munster and here in the showdown with Glasgow.

The rain fell, disrupting the natural tendencies of both sides to play their attacking high octane rugby but Connacht adapted better. They withstood plenty of pressure in the opening quarter and Aki’s try came against the run of play to put them 7-0 up at the break. The visitors had failed to convert try scoring chances. In the absence of kicking scrum half Henry Pyrgos, Finn Russell had scuppered two kickable penalties.

Early in the second half Glasgow struck back with a key score finished off by prop Gordon Reid and converted by Russell. But the game’s pivotal moment came on 52 minutes when Tongan prop Puafisi saw red after a moment of stupidity. He led with the head in clearing out a ruck after the whistle had gone. Connacht took control and Shane O’Leary’s crossfield kick from Tiernan O’Halloran on the hour mark to give them a lead they wouldn’t relinquish.

As a result of the resilience, the depth, the continued improvement and the improvisation in tactics to get around problems, you just can’t write off Connacht in the title race now. The 500/1 outsiders at the start of the season are 11/2 now and that represents good value with a home semi final to come on Saturday week.

There is always a chance that the injuries to front row forwards will eventually scupper their title chances, Nathan White remains out with concussion, Denis Buckley is a doubt to the final at least while Finlay Bealham, Rodney Ah You and Ronan Loughney all picked up knocks here.

There’s also a chance that at some point before the end of May. One of the sides in the final four will simply just have too much for the men in green. What we can be certain about at this stage is that be it by losing to a better side or via bad luck through injuries. Connacht will go down trying to finish the season on a winning note, attempting to grasp some silverware. They won’t be found wanting in the self belief department.