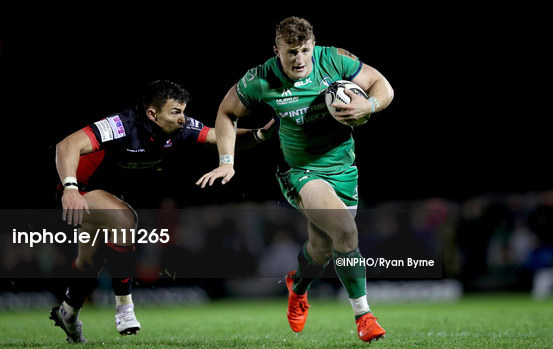 Connacht 28 Edinburgh 15
By Rob Murphy at the Sportsground

THIS will have calmed everyone down a little. A bonus point home win after the worst possible start to the season can only have settled nerves and doubts in the Connacht camp, even if head coach Pat Lam was adamant afterwards that no such doubts existed for him beforehand.

Edinburgh are in crisis and playing poorly for sure. Alan Solomons left his post as head coach just days before departing to Galway and they had just one win from four games on the board. in this game alone, they demonstrated a propensity for creating a bucket load of turnovers in scoring positions.

Put more simply, in comparison with Connacht’s previous opponents, Edinburgh are small fry at the moment but that doesn’t even begin to explain why Connacht were able to cut loose on them at key junctures in this contest and secure a valuable bonus point home win in the process.

This result is as much about attitude as it is about substance. From the get go on Friday night at a wet Sportsground, the home team got back to what they know best. Not basics, far from it, they got back to the complicated high skilled and low margin of error rugby that served them so well last season. Running at every opportunity, even when just metres from their own line.

It can lead to errors for sure and it did in the first half costing them ten points in the process, but it can be galling and unsettling for opponents and, perhaps, more importantly energy sapping for them too. Edinburgh were defending for the first four minutes, in Connacht’s half of the field but defending none the less. Jack Carty had the ball 30 times in the first half, passing 26 times, running three times and kicking just once. That is a statement in itself.

Connacht were supposed to be the team under pressure, desperate for even a one point win to ease the nerves after a start that had seen them loose at home twice to Glasgow and the Ospreys and away to the Scarlets, avoiding a possible fourth defeat in Parma thanks to a storm. If they do turn a corner in the days ahead, they might well point to this game as the moment when they got back to the plan and didn’t let doubt creep in.