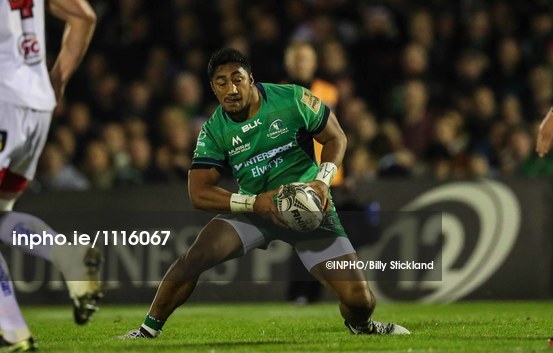 Connacht 30 Ulster 25
By Rob Murphy at the Sportsground

There haven’t been too many more impressive home performances in the Pat Lam era than what we witnessed under lights at the Sportsground on Friday evening. In perfect weather, with an injury hit squad, Connacht produced a truly magnificent 80 minutes to down the side that has beaten them more times than any other in this league.

It was Pat Lam’s first win over Ulster in seven attempts, it was Connacht’s first four try bonus point against them in 26 PRO12 and Celtic League meetings and only a fourth ever win in 15 years of the competition. What is seldom is wonderful for sure but this result can’t be treated in isolation either. It is part of a trend.

The disastrous pre season and inevitable poor start is now a footnote for Connacht. In two weeks, despite plenty of adversity, Connacht have notched up a brace of bonus point home wins. That off the back of a much improved display even in defeat away to Llanelli. A corner has been turned and it has been done by a squad decimated by injuries and changes.

Friday’s game was a thrilling and high skilled encounter from start to finish. Connacht scored three tries within the first half hour to lead 19-3 but over the next 20 minutes or so, Ulster responded with three of their own and the score was level at 22 each five minutes into the second half with the visitors in the ascendency having notched two tries within two minutes of each other.

The response to that stunning momentum shift after half time from Connacht was to get back to basics, take full control of possession and get back to what they do best and before long they were back in front thanks to a try from the outstanding Cian Kelleher after sustained pressure. By the end they would hold onto a five point advantage and secure the bonus point win, Ulster were shell shocked.

Here was a Connacht team forced into six changes from the one that beat Edinburgh the previous week because of injuries and with the need for another changes after just a handful of minutes when Eoin McKeon had to be changed for James Connolly. Decimated by this bad luck but determined to stick to the game plan regardless of personal issues.

That’s why this win was so impressive. Over the course of the game, Connacht owned the ball with 61% possession. They dominated in open play attacking making 434 metres with ball in hand to Ulster’s 253. Ulster forced into making 156 tackles while Connacht had to make 88. There were more offloads, defenders beaten and clean line breaks too.

That led to tries early on, the first came within 100 seconds of the kick off, it set the tone and gave them a platform. Dave Heffernan’s barnstorming break set up position, a few phases later, Jack Carty dropped the shoulder and nipped inside the defence to score under the posts.

Try number two came from Cian Kelleher. The young signing from Leinster has very much arrived. He had 21 possessions during the game opting to run over a kick of pass 17 times and making 114 metres with two clean line breaks, two defenders beaten and two vital offloads.

The former St Michael’s man scored his side’s second try after another brilliant spell of attacking play and had a hand in the third when the restart from Ulster bounced favourable for Andrew Browne and he set Kelleher away. In a high octane break, the superb Caolin Blade and lively James Connolly were among those involved with the latter finishing off the 70 metre free flowing move with a try soon after.

Ulster’s comeback was impressive and included a sin binning for Connacht tighthead Conor Carey who had impressed otherwise on his second start. That helped the visitors back into the game and their two try blitz after half time that saw them turn a 14 point deficit into a tie game but Connacht steadied the ship after some Ulster errors soon after.

Kelleher’s second try came at the end of a huge overlap after another brilliant spell of attacking rugby from the home side. Ulster were eight down on 60 minutes and while they narrowed the gap to five with 14 minutes left, they blew their one chance to change the flow of the game with some crossing in the centres when a try seemed on.

For Connacht, this was rich reward for a return to basics. Little or no kicking with ball in hand, an adherence to a run everything policy that has been the foundation of all they have done well in the last 16 months or so. Don’t expect them to blindly persist with this either but when things are not working, this side goes back to a keep the ball mentality and that’s what is allowing them to differentiate from everyone else. It is working.