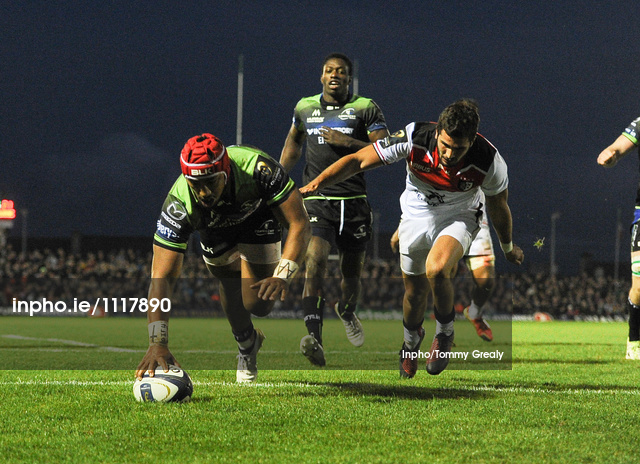 Connacht 23 Toulouse 21
By Rob Murphy at the Sportsground

The rusty form of September is in the rear view mirror and Connacht are clicking through the gears and powering forward. In a pulsating Saturday evening clash at a heaving and sold out Sportsground, the westerners came from ten points down in the second half to win a game that might have done more to redefine their status in European rugby than last May’s PRO12 triumph.

The third consecutive home win in as many weeks was a seismic one for sure but ironically, in hindsight, probably not the most significant of the three. Toulouse are a big powerful side with none of the finesse that we have come to admire over the last three decades of European competition whereas the Ulster side that came here last week offered a lot more of an all round game and were simply harder to beat. Yet this certainly was more significant.

Significant because here was the epitome of what is going wrong with Top 14 rugby. Bish, bash bosh is all we see from most French and English clubs these days. Their national teams aren’t much better and all the while the New Zealanders are pulling further and further away with a new brand of the game focused more and more on the skills. While Europe insists on picking big men and running hard straight lines, all of New Zealand laugh.

There have to be some limits in what Connacht can achieve as they shun the northern hemisphere trends and go the route of a high tempo attacking brand of rugby that sees all risks with ball in hand as opportunities to unearth space and unlock defences. Almost every side Connacht meet, knows what they are going to get, the days of underestimating Pat Lam’s men are done but that doesn’t seem to matter. That’s what is mesmerising.

If there is a bigger scrum in the Champions Cup than Toulouse this season, it will be a sight to see. The game was billed as big men versus fast runners and it lived up to it in every way. Yet by the end, the big men were out on their feet after failing to contain the electric Connacht backline and being out foxed by the home pack. It was a sight for sore eyes for sure.

You don’t want running rugby to always beat a forward orientated game. Rugby is about balance and there’s nothing wrong with going for power and set piece dominance as a route to victory. However, if that’s your only trick in the bag, then there is everything wrong with that approach and the biggest, most powerful side in European rugby lost to a team at the weekend with a fraction of their budget and nothing like their history. They got schooled in fact.

When Toulouse centre Florian Fritz kicked their third penalty on 13 minutes to add to two scores from Sebastien Bezy the signs weren’t good for Connacht. They had barely touched the ball, the penalties had all come from scrums and the prospect of any reprieve in that area seemed non existent. Yet besides that, Toulouse hadn’t offered any other attacking threat and were coughing up lineouts for fun.

The first signs that this game might have more of a balance came from the likes of Cian Kelleher and Niyi Adeolokun who made breaks that lifted the home crowd and their team. While the opening foray failed, they were soon back on the attack with a stunning break from a stolen lineout in their own 22. Bundee Aki and Craig Ronaldson made the try with some brilliant interplay spanning a break of 70 metres before Adeolokun scored in the corner.

Connacht led 11-9 with ten minutes to go in the half but out of nowhere Toulouse found some momentum and poise in attack to score two tries. One from Yann David, the other from Jean Marc Doussain to lead 21-11 at the break. The last attack of the half for Connacht was an overthrown lineout five metres from the home line so all was not well.

It got worse for Connacht before it got better. Two more visits to the visitors 22 yielded nothing but a missed kick from Bezy in front of the posts for Toulouse proved a turning point and sparked a final quarter surge that underlined why Pat Lam’s men are a fitter sharper and more attacking side.

A brilliant try from Tiernan O’Halloran got the home side within five before the inspired Bundee Aki levelled matters with 15 minutes left. The conversion from the right touchline was expertly nailed by Craig Ronaldson and the two point lead was in place. The defence at the end was heroic and composed with replacements Sean O’Brien and Shane Delahunt standing out.

All seems to be well in the Connacht camp, fitness levels are outstripping opponents, Andrew Browne is slotting into the Aly Muldowney role and performing superbly. The Caolin Blade/Kieran Marmion tandem is working well at scrum half, Jack Carty is running the game well and setting up tries with brilliant long passes and Ronaldson might be the answer to the goal kicking issues. Then there is the inspirational Jake Heenan.

We could go on and on about who is playing well but considering how disjointed the project looked in September, perhaps we should take a breath and enjoy the here and now a little longer. Zebre have never beaten Connacht but on the last two trips to Parma, the westerners have been disjointed and sloppy and were thanking the rain gods and general luck for not losing there. A more ruthless display next Sunday and they will be well established as a European quarter final contender.