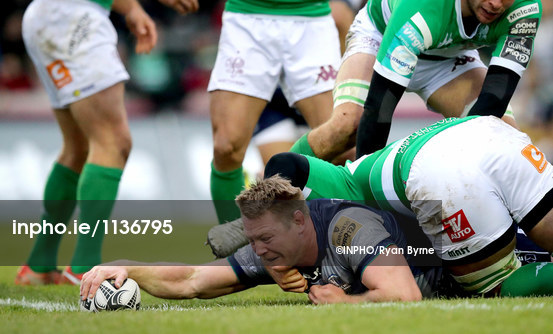 Not every team chasing a top six place in the PRO12 will get a bonus point win in their home fixture over Treviso but those that don’t will be kicking themselves. With that in mind, this was a case of job done for Connacht by half time at the sold out Sportsground on Saturday evening.

Two weekends in a row now Connacht have sold out their venue for fixtures that are not high on the must see list. Sure, Cardiff are a strong side but last week’s fixture was in the international window while this one was against an Italian side that time and time again show scant regard for producing consistent effort throughout the league season.

The Italian franchises are offering little or nothing to the PRO12 and thanks to the competition collective agreement, they are in the early stages of an eight year structure where they are guaranteed one place in the Champions Cup each year.

So why should they bother trying away from home? One or two home wins a season and bettering their Italian rivals is more than enough to get them there. If the PRO12 organisers want more from the Italian teams they’ll have to find a way to incentivise some progress as the current format is not working.

That’s not Connacht’s problem. For Pat Lam and co, the aim over these two weeks was to get back to winning ways in the PRO12, extend their home winning streak to five after those two awful performances in September and build momentum for the Champions Cup fireworks with Wasps in the coming weeks.

They’ve ticked all the boxes and brought back a lot of injured players in the process, it hasn’t been a perfect couple of weeks on the field but it wasn’t far off that. Seven tries was a decent return, had they been a little more fluid offered a little more power from the bench in terms of scrums and not picked up a few more knocks and bruises, it could have been more.

As it was, they led 28-3 at half time and added three more tries after the break. Tom McCartney got two in the first half, Denis Buckley popped up on the shoulder to score a third while Nepia Fox Matamua had a brilliant assist for Dannie Poolman’s first try of the season during the first half.

In the second half, Quinn Roux got over for a try as did Dave Heffernan while Jack Carty rounded things off with a neat sidestep from ten metres out and a try under the posts. John Cooney kicked well throughout and notched five cons, Carty converted his own try and that was that really bar a brief period for Treviso where they got the upper hand at scrum time after replacements were made.

As the game wore on, mistakes crept in but an underpinning element of the Lam era in games like this is the pressure players put themselves under not to let standards drop even when the intensity of a contest is low. Little errors late on were met with the kind of frustration you might expect to see in the heat of the Wasps battle in Coventry this Sunday.

Every replacement that came on seemed clued in and fully aware that their performance in those closing minutes counted. Some didn’t perform and their body language portrayed an awareness that little errors counted.

When a team is struggling for success, this environment can stem from a coach placing too much pressure on the players but in this case, it is clear that the pressure is coming from the players themselves and that can’t be a bad thing.

Lam has been stressing this a lot this season, players are taking the lead, he doesn’t have to say half as much in the post game dressing rooms or the Monday morning video session compared to two years ago, the players are saying it for him. That’s the environment of a successful sports team and Connacht have a trophy upstairs in the Cawley room that entitles them to act as such.

Beyond all that this game had only one other element to it, Marnitz Boshoff’s first start at out half. He certainly had some good moments both with the boot and stemming from his sharp looking pass and he looked set to complete the full 80 minutes up until an injury to his left shoulder held him back. It was one worrying development from a fairly uneventful night.

The platform is set then for four more games in what looks like being the most important month of the season. Next up, Wasps home and away before a trip to Ulster on the 23rd and the New Year’s Eve clash with an in-form Munster. It would be easy to get ahead of oneself, yet Coventry and the Premiership joint leaders Wasps should focus the minds. Lam has less injury concerns then at any point so far this season, he also has a two game winning run. Momentum is everything.