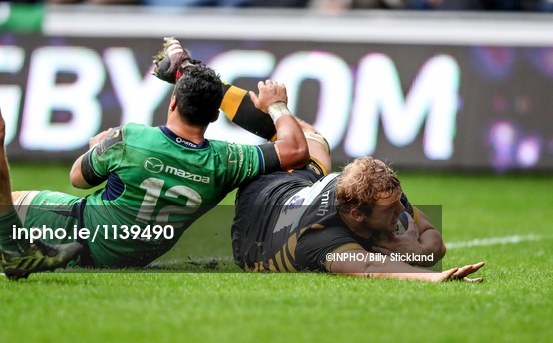 Wasps 32 Connacht 17
By Rob Murphy at the Ricoh Arena

Since that glorious day in Edinburgh back in May, the news feed emanating from Connacht has not been good and we all need to acknowledge that at this stage. Bar two wonderful weeks in October – where they toppled Ulster and Toulouse and announced extended deals for Ultan Dillane and Bundee Aki – it has been one bad story after another.

Connacht arrived in Coventry on Sunday hoping to kick start a new narrative, a European Champions Cup story like never before. They are the first squad from the province to be a genuine quarter final contender and the PRO12 Champions took to the field in the Ricoh Arena rightfully bullish about their prospects, despite the home side’s glowing reputation.

It was a tough contest but by the 60 minute mark, all seemed well for the men from the west. They trailed by just three, owned the possession and territory stats and had sorted out the lineout which misfired badly for 50 minutes. For a brief moment we wondered if this was to be the turning point in the campaign, what better way to push back against a tide of bad news than with a huge win in Europe’s major competition.

Alas, it wasn’t to be. Jack Carty missed a kick to level the game and within a couple of minutes, Wasps notched a try from their captain Joe Launchbury for a ten point swing. That was game over for Coventry based side, a bonus point fourth try was inevitable from there on and it came around the 70 minute mark from Josh Bassett.

Connacht trundled off the field in the end, well beaten and with a multitude of new injuries to contend with ahead of this Saturday. They’ve no out half left to back up Jack Carty, no fully fit experienced centre option outside of Rory Parata (who by the way, is covering ten too). Wingers are dropping like flies, plenty of flankers and second rows are unavailable too. Only Carty attempted kicks in the warm up.

Connacht are not converting scoring chances at anything like the rate they need to this year. In almost every away game this season they have had a shed load of possession and territory but botched chance after chance. Fixtures against Scarlets, Leinster, the Dragons and now Wasps. All lost by more than a score, all marked by a failure to convert. The one exception came against the totally inept opposition Zebre in October.

It was a familiar tale Sunday as they burst out of the blocks with great moments of attacking play that underline why their supporters still fully believe the team can turn a corner. A bulldozing scrum against the head where the excellent Conor Carey drove into Matt Mullen and Denis Buckley completely overwhelmed ten time capped Irish international Marty Moore set the tone.

Connacht attacked in waves but each time they had a platform, malfunctions happened either via a completely chaotic sequence of lineouts or some loose passing in the 22 metre zone. Stacey Ili was guilty of a key one of those early on. The young kiwi centre has been vaulted into first team action ahead of a lot of academy graduates but he’ll need more time it seems as he has virtually no experience at a level of rugby that is even two steps below international grade, never mind trying to compete in the Champions Cup.

Both Ili and Nepia Fox Matamua appeared at fault for Kurtley Beale’s try on 13 minutes which came at the end of Wasps first decent attack. The lineout that started it stemmed from a penalty against the aforementioned Connacht 13 who was more than a little hard done by on that decision. A frustrating error from Alexander Ruiz.

Minutes later, the French official sent Australian Beale to the sin bin for a tackle that was high on Niyi Adeolokun. The centre did dip his head and this was very much a case of the new directives from the autumn internationals shaping the mind of the officials but it was the right call based on that. Jack Carty had missed a simple early penalty chance but struck a more challenging one to make it 7-3.

Connacht’s first try came during the sin bin but not before Wasps fly half Jimmy Gopperth kicked them seven clear again. The scrum was the platform for the Connacht try. John Muldoon made the break and passed off the ground for Marmion to score off a brilliant line. By half time the lead was 13-10 and early in the second half, Nathan Hughes scored to make it 20-10 to the home side.

Replacement centre Rory Parata had the huge Connacht support on their feet heading towards the hour mark when he intercepted 30 metres out to score. It was a fortunate score when a Wasps break seemed on but it set Connacht back in motion right up to that kick for Carty. His confidence just doesn’t seem to be the same level as it was last season.

It all adds up to another tale of woe. Coaches are leaving, Andre Bell gone, Dave Ellis and now Lam to follow soon enough. Key, key players are gone, Aly Muldowney, Aj MacGinty and Robbie Henshaw could have all made a huge difference here and just about every position has someone important missing through injury. That’s the reality.

It all means that whatever side takes to the field in Galway on Saturday will have no pressure and all the excuses in the world should Wasps turn on the style and overpower them as most pundits expect. That said, you’d imagine they are all getting a little sick of this new normal that has overtaken the good times so quickly. There has to be one major kick in this team before 2016 ends. Right?