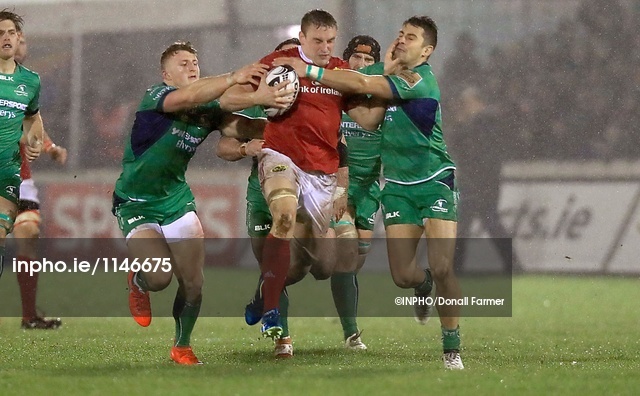 Connacht 9 Munster 16
By Rob Murphy at the Sportsground.

These are challenging times for Connacht. Home form since October has been the saving grace for a team beset by bad luck and reeling from a post title squad departures. Well the home form has taken a dip now too with this vital inter-provincial defeat at miserably wet Sportsground on New Year’s Eve.

While most of the world welcomed 2017 with a sense of relief and hope after a year generally described with negative connotations, Connacht fans might be dreading what lies ahead and yearning for a chance to go back.

The year 2016 will forever be regarded as a glorious breakthrough one for rugby in the west, no one thought this new found place at the top table was untouchable and even before the players boarded that plane back to Knock from Edinburgh, trophy in hand, everyone knew that the squad for next season was already shorn of some key frontlines.

Fast forward seven months from that great day in Murrayfield and Connacht are now treading water in terms of the race for a top six finish. Of course a spring surge – if some much overdue luck with injuries comes their way – might yet see Pat Lam’s men work their way back into contention but they trail Ulster by 12 points in the standings and are back in the old familiar position of needing favours from others.

The home form this season has included wins over Edinburgh, Ulster, Toulouse, Cardiff, Treviso and Wasps. A vital run of results that has helped steady the ship from a awful start. Saturday night was never going to be season defining, Munster are always a serious force at the College Road venue and arrived on the back of a run of eight wins in nine.

Yet Munster made 11 changes from their first choice starting lineup that defeated Leinster. They were smack bang in the middle of a run of seven games that included two games against Leicester, that home derby with the men in blue and forthcoming games against Racing Metro twice and Glasgow.

This was the game they had to sacrifice in terms of selection but such is the mentality of Rassie Erasmus and his squad these days that they weren’t about to give up on the result. With just 38% of possession and 43% of territory they outfoxed, outsmarted, outmanoeuvred and outfought the westerners in a way that just isn’t meant to happen to the reigning champions.

Connacht were hoodwinked here, tricked into playing for tries when kicks at goal offered a match lead, sucked into giving away turnovers, cajoled into giving away two scrum penalties despite total and complete domination in that department and made to look completely at odds with their own plans when it came to the much maligned lineout which once again misfired in a major game.

Understandably, Pat Lam pointed to a hugely disrupted month with 22 injured squad members and while he was able to field a lot more frontliners than he could have hoped for earlier in the week, it was clear that he was overseeing a patched up group that hadn’t trained together as a unit. That’s a significant factor in all of this.

The tone was set early as thr rain fell. Munster led 3-0 after a brilliant Billy Holland break at the end of a high tempo attack and a Ian Keatley penalty. That seemed to signal a serious attacking intent from the visitors but their smaller than usual travelling support were fairly quiet from there until half time as Connacht fought back to level. Yet late in the half Keatley scored again and Munster seemed content with their lot.

The twenty minutes after half time is where Connacht’s dominance on the stats rung through. Big scrums garnered penalties, some clever cross field kicks caused havoc and in general, Connacht’s forward play was effective with first half replacement Sean O’Brien, Denis Buckley and Tom McCartney all to the fore.

Yet on the hour, they had a chance to kick themselves in front and chose the more risky option of trusting their lineout in the corner. It proved a pivotal moment. Munster turned over possession from the resulting maul and Keatley put in motion an attack which resulted in the try by executing an audacious crossfield kick in his own 22 to release the electric Andrew Conway.

The subsequent attack spanned the length of the field, included a kick chase that resulted in a key turnover and a second kick chase that saw Kieran Marmion forced over the touchline before being allowed to get back on his feet. No penalty then and the resulting lineout and maul was a lesson in simplicity, this whole game was a lesson in simplicity for a home team that things only in the complex.

The brilliant New Zealander Rhys Marshall scored the try, Keatley converted and as if to underline the lessons being though became the first man to kick a drop goal at the Sportsground for over three years to stretch the lead to ten. Late on, Jack Carty responded for Connacht with a kick to earn a losing bonus point but that was that..

Referee Dudley Phillips felt the ire of the Sportsground faithful at the end, he and his officials had made a mess of a sin binning scenario deep into injury time where Munster should have had just 13 men on the field but finished with 15. It was a farcical few minutes from his crew but hardly the definitive reason why Connacht lost. Home supporters may well realise in the coming weeks that their anger was misplaced.

Despite all the gloom, that Wasps win has kept the season interesting and kept hopes alive. Connacht have almost impossible shoes to fill in the coaching position but must try anyways, they still have key men to replace from last season’s squad too, not to mention a bunch of young talent to integrate in what now seems like an unavoidable rebuild.

Munster were in crisis back in April it’s all change now, Connacht haven’t dipped anywhere near as low but after a plateau in form over the last few months, this will all seem like less and less of a blip if things don’t improve in the coming months. It would be nice if they caught a break or two with injuries to start get things rolling again.