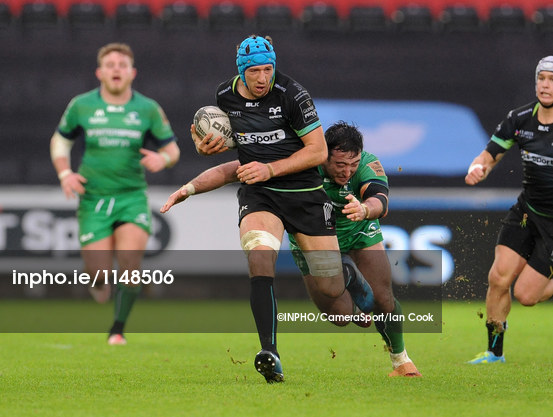 On paper Connacht looked to be fielding a relatively strong team when they travelled to Swansea on Saturday to face the best side in the PRO12 so far this season and one of the most explosive attacking sides in European rugby. In reality though, this was a patched up Connacht side that were once again outfoxed and out battled in a key game, this time by the Ospreys.

Only six of the 15 that started last year’s PRO12 final were starting here for Connacht, as well as the trio who were already signed up by other clubs the day they took to the Murrayfield pitch, (Henshaw, Muldowney and MacGinty), The likes of John Muldoon, Bundee Aki, Ultan Dillane and Kieron Marmion were all unavailable to Pat Lam for this one.

What he had at his disposal was a fully fit first choice front row who once again delivered a brilliant and completely dominant display at scrum time and a fully fit first choice back three who demonstrated in the stats at least that they are still in top form, Tiernan O’Halloran made 123 metres on 12 carries, Niyi Adeolokun made 92 metres on 9 carries, while Matt Healy had 74 metres on 9 carries.

The problem however comes with what Connacht did with the gains they made from these two key areas of the field. The scrum penalties led to lineout opportunities and that set piece area is in disarray at the moment, four key lineouts in Ospreys territory were turned over while the advantage they had in the back three was completely negated by the fact that their rookie centre partnership was found wanting.

As if that wasn’t enough, Jack Carty picked up a serious knee injury during a first half where Connacht conceded two tries in the first 15 minutes. With three other out halves all unavailable through injury, third choice scrum half Caolin Blade was next in line to slot in to stand off and while he put his heart and soul into the role, it was always asking a lot against the league’s most potent attack.

In terms of scoring, the Ospreys scored two tries from back row forwards Dan Baker and Olly Cracknell in the first half all coming from surging attacking rugby with the initial break starting inside their own half on each occasion. By half time, Connacht had fought back in general play but they failed to convert numerous chances and inexplicably, for the second week running, turned down and easy three points along the way.

Early in the second half, Sam Davies kicked his side into a 17-0 lead before Nicky Smith powered over for a third try and while Sean O’Brien got his first try for his province on 72 minutes, that was just a consolation as Ashley Beck sealed the bonus point for one of the title favourites with the last play of the game.

This was a sound beating in every way for Connacht. The scoreboard is backed up by the stats. The Ospreys made 21 clean line breaks in the game to just 7 by Connacht, beat 25 defenders in open play as opposed to Connacht’s 7 and successfully offloaded the ball in open play 17 times to Connacht’s 7. They had a 95 percent tackle success rate to crown it all off while Connacht were at a measly 80 percent missing 25 tackles in the game.

The knock on effect of Bundee Aki’s absences is enormous. Between them, Peter Robb and Rory Parata combined for less than ten metres of gains in the first half. Naulia Dawai had his stand out Youtube moments when he was in open out wide play, but he struggled in the defensive line early on missing a couple of key tackles, he and his colleagues also failed to get their side on the front foot.

The kicking game didn’t function either and once again, an opponent of Connacht gladly surrendered possession for long periods and forced the reigning champions to run the show before coaxing errors with a blitz defense.

The PRO12 title defense is now well and truly over after eight defeats in 12. The race for a top six spot is also all but done and dusted leaving Connacht with the remaining target of at least finishing either seventh or eighth which overs a place in the end of season four way play-off for the final Champions Cup spot along with the seventh ranked side from France and England.

Who knows? Come May, Connacht might finally have a near full strength squad and some momentum to actually challenge in that area. In the meantime, they need to just hang in there in the top eight in this competition and look to the Champions Cup as a saving grace on this patchwork of a campaign so far.

The distraction of Europe is a welcome one and the visit of the struggling Parma based Zebre a timely fixture. A bonus point win is absolutely essential to keep the dream of a place in the last eight alive. A big Wasps win over Toulouse will also make life a lot easier. If Connacht can fall over the line there and get to the next break still in that competition, a path to recovery will be clear to see. Otherwise, this might get fairly bleak.