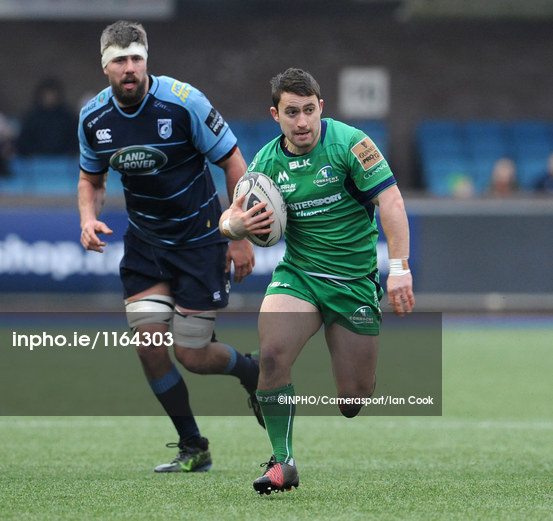 Cardiff 13 Connacht 19
by Rob Murphy at the Arms Park

Sheer desire, determination and a fair amount of desperation got Connacht over the line in Sunday’s lunchtime clash at a half empty Cardiff Arms Park as the PRO12 campaign resumed.

The closing ten minutes saw the westerners completely dominate their hosts and their persistence eventually paid off with Tiernan O’Halloran kicking an unlikely and precious drop goal before Craig Ronaldson rounded off the contest with an insurance score.

Considering the glorious moments that have been witnessed in the past 12 months, it’s hard to get overtly enthused about an away win in Cardiff but in the context of the long term Connacht rugby project, this result could turn out to be an important milestone.

Before the game on Sunday, news was breaking that Johno Gibbes – a man heavily linked with the vacant 2017 head coaching position in the west – had taken up the head coach role in Ulster as second in command to Les Kiss. Connacht rugby needed a break on Sunday, this result was timely.

In fact the win could be the catalyst for a change in the narrative. The vocal travelling army in an extremely small crowd were certainly in good spirits at the end as the team acknowledged them, they had gone through the mill in this contest and figured out some issues along the way.

By the half hour mark, the Blues were in total control off the back of Nick Williams try and the boot of Gareth Anscombe. A rare penalty miss from John Cooney had underlined a poor start for Connacht where they had possession but very little significant penetration.

The game’s turning point centred around a late first half surge from Connacht, a crossfield kick from Jack Carty that Niyi Adeolokun won on the 22 under heavy pressure proved to be the spark. Sharper handling in subsequent rucks, clever use of possession and some big carries from the forwards changed the whole tone of Connacht’s attack play.

Tom McCartney had the most significant carry, bouncing off three players and making it to within two metres of the line, two pick and go phases sucked in the defence before Jack Carty whipped a long range pass out to the left wing where Matt Healy was in an ocean of space.

That score transformed the contest at half time with Connacht down by just 13-7. The start to the second half underlined a very different attitude in the Connacht team as they came out and added three more points. The Blues responded and dominated possession and territory for the next 15 minutes but the scores didn’t come.

That spell of strong defence completely transformed Connacht’s belief and confidence and by the time Cooney levelled the match on 62 minutes, all the momentum was with the visitors. It took until the final ten minutes for them to build some pressure in the 22 with the impact from replacements like Tom Farrell, Dave Heffernan, Finlay Bealham and Caolin Blade proving crucial.

Three visits to the 22 after the 70 minute mark came up empty however and echoes of the Toulouse defeat – which still clearly lingers on the mindset of this squad and management – were coming back and when Carty missed an easy drop goal, a draw or the usual one score defeat at this venue seemed on the cards.

Resilience won out however, Caolin Blade’s rampaging break got Connacht back into the 22 one more time and this time they converted on a drop goal effort as Tiernan O’Halloran’s scrappy but cleverly devised effort found it’s way over.

The final play of the game saw Craig Ronaldson burst out of the line for a huge tackle as he had done on numerous occasions in a fine all round effort and his work was rewarded thanks to the tenacious work of John Muldoon who got in over the ball and forced the penalty on halfway. Ronaldson kicked it with the last play of the game.

For the first time in quite a while, Connacht can look back on a performance where they edged their opponents in every department. Lineouts were much improved, scrums too even if they were on the wrong end of some harsh calls, the defence was dominant after halftime and the line breaks and defenders beaten stats were backed up with scores, rather than fruitless visits to the 22.

Sean O’Brien continues to impress at six and notched up 19 tackles during the contest while making a huge impact at the breakdown, James Cannon is also emerging as a big force, strong at lineout time and he made a team leading 21 tackles. Jake Heenan had some big carries too and is reaching his best form.

Perhaps most importantly though is that this was a Connacht performance where the side seemed at ease with their mission and were functioning much better from an early stage. Most of Connacht’s big gains came from attacks around the fringes and the supporting runs were always there.

Lots then to be hopefully about. Connacht are well back from their main target, the Scarlets in the hunt for sixth. Ulster are another to catch but the men from Belfast have an easy run in while the Llanelli side are going to be tested far more.

The westerners need a winning run now, three games against the Italian sides follow next Saturday’s home tie with the Dragons. A five game winning streak, with a number of bonus points, would work wonders for their Champions Cup qualification hopes and does seem to be well within their capabilities