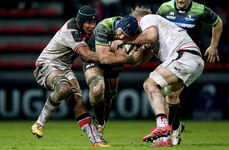 There is an outrageously positive element to Sunday’s heartbreaking defeat for Connacht in the south of France. Jump back ten years in your mind and try and contemplate how unlikely this fixture would have seemed. The west of Ireland’s finest in a battle with the mighty Toulouse on the final day of European Cup pool action for the sole remaining place in the last eight of the competition.

The Stade Ernest Wallon is as hallowed a venue in the world of rugby as any you could mention, from Thomond Park to Eden Park and here on a Sunday afternoon in late January, the men from the Sportsground entered the final ten minutes of an enthralling encounter within three points of glory, three points of a place in the quarter finals. Rugby enthusiasts throughout the continent tuned in, hoping for another great moment.

It didn’t come. The poise and conviction that underpinned last year’s glorious PRO12 triumph deserted Pat Lam’s men in those closing few minutes at the weekend. For all their heroic commitment and endeavour, no assessment of this defeat could accurately tell the tale of this encounter without first underpinning the calamitous conclusion to contest. Connacht botched a glorious opportunity here.

There was no hiding from it either. Jack Carty was in the pocket poised for a drop goal attempt in front of the posts with nine minutes to go, Tiernan O’Halloran, John Muldoon, everyone knew the scenario, Connacht were only nine points down and a defeat by less than eight would be enough to keep them ahead of Toulouse in the pool. For five or six seconds, Carty and his team seemed to be on the same page.

Yet, the pass never came to the Buccaneer and one phase later, the Athlone man had slotted back into the line and was executing a brilliant bullet pass out to the wing to Matt Healy. Had the former Lansdowne sharp shooter held it, the drop goal tale would have been a footnote, that he didn’t hold it was down to bad luck and a high difficulty level.

The game wasn’t up for Connacht at that point, there was still time on the clock and as it transpired, they got the ball back and had two more promising forays into the Toulouse half. Yet both failed to yield a score and in the aftermath, only one moment stood out. The conviction and command of the situation that was needed wasn’t there. Toulouse survived.

Before kick off, no one was out of the loop on what needed to be done, Connacht were chasing a win but fully aware that a draw or even a seven point defeat could be enough, (as long as Toulouse didn’t score four tries in that scenario). All of that seemed academic after just 18 minutes, the hosts had steamrolled Connacht in a jaw dropping start and scored two tries from Gael Fickou and Arthur Bonneval.

A 14-0 margin must have had the hosts thinking they were in for an easy afternoon, Craig Ronaldson did manage a three pointer before the break but by the 45th minute, it was a 19-3 lead for the French side after Christopher Tolofua powered over with little opposition after a neatly crafted maul from a lineout.

At that point, Connacht were on their knees and the stats backed that up, they had seen barely any ball, played most of the contest inside their own half and were coughing up possession on a regular basis.

Yet by the hour mark, everything changed. A John Muldoon try certainly got things go, the introduction of Sean O’Brien also helped as they finally got to grips with the clearouts on their own ball and the backline started to motor as Craig Ronaldson and Peter Robb somehow managed to turnaround a very patchy first half display and get going.

Even the lineout was working, James Cannon stole two from the hosts, the scrums were breaking even throughout but started to swing towards the front row from the west and the chances started to come. It all built towards that ignored drop goal opportunity underneath the posts.

Ifs buts and maybes dominate most rugby seasons unless you win something. It’s been two years since they’ve had to finish a campaign with such regrets. There’ll be no trophy this year, no marquee Champions Cup quarter final either. Had they found three points late on, the green army would have been heading for Limerick for a quarter final that would have marked another glorious day in the evolution of the game in the west.

The challenge now is probably mentally tougher than facing Munster on that stage. Two parts of the season are done and dusted both in terms of length and objectives. The PRO12 title defence is over, the Champions Cup is over too all that’s left is the chase for a place in next year’s Champions Cup. That race will bring little or no fanfare, Ireland’s media will barely even notice Connacht in the next four months and the wins needed will happen far away from the spotlight.

This Connacht team are hurting, the final whistle was greeted with visible despair and dejection. A group of players that have tasted glory a little sooner than most could have dreamed of must now deal with a rapid ejection from that stage and regroup for a hard spring where only near perfection will do.

Starting with Cardiff away in three weeks, a Connacht side missing just four players to Ireland as a result of the dwindling form, must go on a run of victories against sides in the lower half of the table and reestablish themselves in the race for the top six. Five wins in a row against the likes of the Dragons, Zebre twice, Treviso and the Blues is well within their wheelhouse. There’ll be no open top bus if they succeed come May but these are the battles that will define this team for the coming seasons.