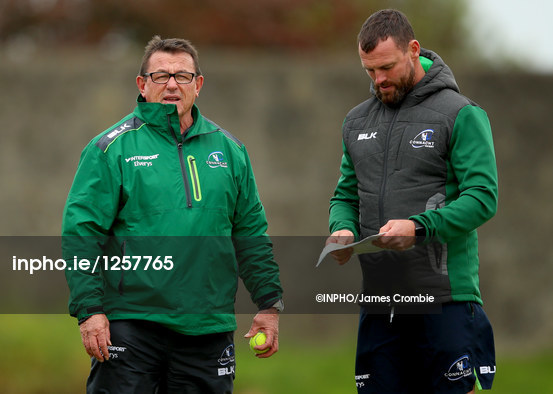 By Linley MacKenzie (this article originally appeared in the Galway Advertiser)

It gets under way for Connacht on Saturday evening in the Sportsground when Glasgow Warriors are the early visitors for a second successive season.

It may not be new coach Keane’s ideal opener, up against his former Chiefs colleague Dave Rennie. But he says the players are in a good space ahead of Glasgow’s visit to the Galway Sportsground.

“There’s a real good feeling. I think they are going to be up for it. There is a lot of energy, and every coach wants to feel that,” he says.

They will need that energy and more for his season’s new look PRO 14 as they bid to qualify for next season’s Champions Cup after their failure last season.

It is becoming the nonnegotiable goal for all teams in the championship. But it could be somewhat harder in the new conference structure and less easy to predict.

However the arrival of the two South African teams, the Cheetahs and the Southern Kings, has added an extra dimension. It has certainly a few extra thousand Euros to the coffers, which has generally been welcomed.

And it will not be long before Connacht supporters have their opportunity to view one of those teams with the Southern Kings arrive on Saturday week.

First up, however, are the Glasgow Warriors. A team that has reinvented itself in recent seasons under former coach Gregor Townsend. Now it is a head to head with Glasgow’s Rennie and Connacht’s KK – which will certainly add spice to this opener.

Keane has some injury concerns after two tough pre-season matches against Wasps and Bristol last week. He is also managing his international players.

“The biggest issue is the two games last week flattened a couple [of players]. Some have done some big miles, particularly in the back field. So we are managing them and we are anticipating every one will be all set on the day.

“We are limiting some of the players because of their status, their injury status, and the fact they need a break. We are trying to manage that as best we possibly can.”

Definitely out of action are Quinn Roux (ankle ), Jake Heenan (back ) and Tom Farrell (thigh ); Denis Buckley and Peter Robb are also doubtful.

Caolin Blade “stepped up” his rehabilitation this week; while Naulia Dawai, Niyi Adeolokun and Tiernan O’Halloran continue their return to fitness.

With three of Connacht’s first four fixtures at the Sportsground, Keane says there is pressure, but he is delighted to be at home.

“There is pressure, no doubt about that, but I’m actually rather pleased to be playing at home. Judging by the way the boys responded in the pre-season game here, it lifts them.

So I am hugely in favour of the fact there is pressure, but to be frank, I wouldn’t want to be in any other place.”

Glasgow, who hammered Connacht in this fixture last season by 41-5, return with former Chiefs boss Dave Rennie in charge, and Keane, his backs coach in Hamilton, is expecting both sides to play a similar style of expansive attacking rugby.

“He will play an open and expansive game and we will be very similar. We’ve not had a lot of footage [of Glasgow]. What we do have we have combed over, and they are quite similar, so it’s going to be a toughie.

“We want to challenge the opposition as they will want to do to us, so there will be a stalemate I suspect. How we handle that will be really important to us, and moving forward into the game, what we choose to do, decision making, will be important.”

Keane, less than a month into his new job following Pat Lam’s departure to Bristol, believes there is more potential to tap from his Connacht squad.

Play with eyes up

“I am trying to get the boys to play with their eyes up, to see what the opposition is offering and to manipulate the opposition, that has been the focal point of how we want to do things and it will continue into the season.

Keane says he is “looking forward” to catching up with Rennie, having become “good mates on and off the park”- in addition to the two having placed a couple of side bets on the fixture.

“We were both rubbing each other at home, and there were a little bit of side bets on this. I am also a competitive man and I don’t want to lose this bet.”