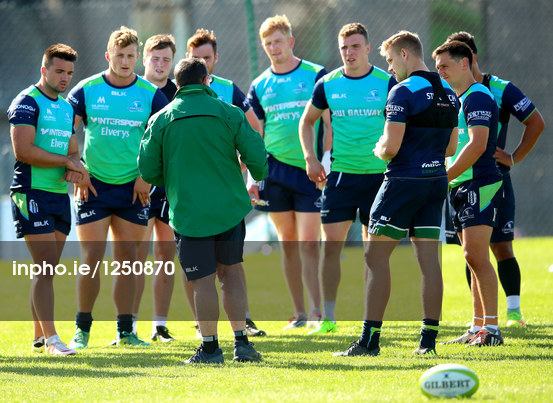 Connacht are preparing for a real backlash from Bernard Jackman’s Dragons when the two sides meet in Rodney Parade on Friday night.

In Connacht’s first away fixture of this season’s Guinness PRO14, they will face a Dragons’ side stung from two previous defeats.

And with former Connacht and Ireland hooker Jackman installed as their new head coach, a real battle is expected between the two sides.

There is no doubt Jackman will be targeting Connacht as their best opportunity to get a win.

His former team mate and now Connacht’s back coach, Nigel Carolan, expects a testing night for his squad.

“Historically Connacht never had to easy at Rodney Parade and we can’t hide from that fact. Coupled with the new broom in their coaching team, they are at home and they will be looking to us to pick us off again.”

“Jackman is trying to rebuild the Dragons and create a strong identity,” says Carolan who played alongside the former Clontarf man under Warren Gatland.

“They will be a tight-knit group, much like he did in Grenoble, and they were difficult to play against.

“He is trying to play an expansive game, and they have some real firepower with Ashton Hewitt and and Zane Kircher, and the old boot of Gavin Henson who can kick them into positions.”

Although Glasgow finished comfortably last weekend with a 47-17 at Scotstoun, it was “only late in the game when the Scots pulled away”.

“It is going to be a very difficult game for us and we have to make sure we build on last week and are more effective than we were,” Carolan says.

Dragons and the Southern Kings are propping up Conference B, the only two teams without a championship point.

Connacht are currently third in Conference A behind leaders Munster and the Warriors.

However Connacht lost 21-16 last November in Rodney Parade, with Hewitt bagging two tries, and Carolan says their forwards are just as effective.

“They have a very effective line-out defence, and they will not give us an easy platform.

If their team gets on top, it is a difficult place to claw back from, so we have to make sure we get a strong foothold in the game early and hopefully silence the crowd as early as we can.”

“We need to up the standard of last week. While we got the bonus point, we probably made it a little hard for ourselves, so we need to ensure we iron out those crevices this week.”

Connacht is expected to make some changes “to rest players”.

But new outhalf Andrew Deegan is not expected to feature after his arrival last week, while Carolan believes Rory Scholes, “effective in training, has a real spark”, will start to feature in the next couple of weeks.

A big boost is that scrumhalf Caolin Blade and the Ireland trio, Finlay Bealham, Quinn Roux, and Tieran O’Halloran, came through last weekend’s game with no recurrence of recent injuries.

Lock Andrew Browne is recovering from an Achilles injury, while Sean O’Brien was due to have a scan on his shoulder.
Scrumhalf James Mitchell (shoulder), centre Peter Robb (hip surgery) and Niyi Adeolokun (knee) are all ruled out.

Another win would certainly boost the feel-good factor that was evident at the Sportsground last Saturday in an historic first meeting with South African side Southern Kings.