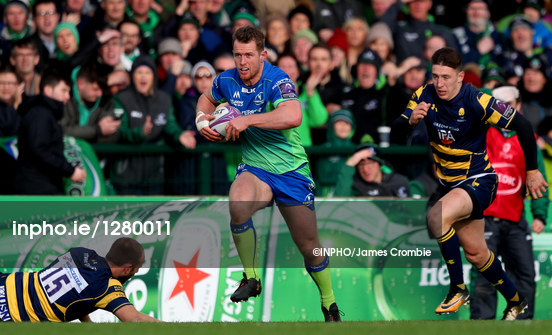 Connacht defeated Worcester Warriors in a dour, stop-start encounter with two well crafted tries that glistened like rays of sunshine breaking through the grey clouds of mediocrity as both sides struggled in windy conditions in the Sportsground last Saturday.

The English Premiership side won the toss and decided to play into the howling gale blowing down the field from the Bohermore end of the ground.

It didn’t look like the most prudent of decisions for a team who have not won away from home all season when they conceded a try after 5 minutes.

Connacht executed a sweeping backline move off a scrum from inside their own half. The ball swept across the backline to Tiernan O’Halloran who scorched down the tramlines before offloading to Darragh Leader.
The tall winger took the ball on the 22, beat his man on the inside, almost held off three more defenders before being dragged down two metres short of the line. The ball was recycled at speed and scrumhalf Caolin Blade flung a beautiful miss pass to the onrushing Eoghan Masterson, who crashed over for a stunning opening score.

However the inventive promise shown by the home side was strangled by a very pragmatic Warriors team who held on to the ball for long periods and defended stoically for the rest of the half.
They only conceded a single kickable penalty, which Jack Carty converted. An 8 point half time lead didn’t look half enough for Connacht to defend considering the strength of the wind that they would be playing into after the break.

A promising start to the second half by the home team was badly disrupted when they turned the ball over in midfield. Worcester transitioned to attack with lightning speed and in the blink of an eye wing Josh Adams was scampering over in the corner to narrow the gap to three points.

The former PRO12 champions showed their mettle as they refused to allow that score to rattle them. Six minutes later they had a two score lead.
Connacht held possession for a number of phases as they probed the Warriors defense. Outhalf Jack Carty spotted some space behind the rush defense and dinked a perfectly weighted grubber in behind 3 defenders.
Matt Healy was alive to the opportunity and made the most of a favourable bounce to latch onto the ball and turn on the afterburners to go under the posts untouched.

The last quarter of the match drifted along without either team able to impose themselves. Former Munster and Ireland stalwart Donncha O’Callaghan entered the fray, and added a fair amount of spice to the last few minutes. His presence inspired the visitors and recent signing Jono Lance made it a one score game with 6 minutes left on the clock.

Connacht comfortably held out for the last few minutes but will be disappointed to have allowed the English visitors to leave with what could be a very valuable losing bonus point by the time the pools stages reach their climax in January.

It was a good victory and leaves Connacht in control of their pool with 9 points from two games. However Kieran Keane was not very happy with the peformance and knows that there are a number of gears to be found if they are to trouble Munster next Friday night.