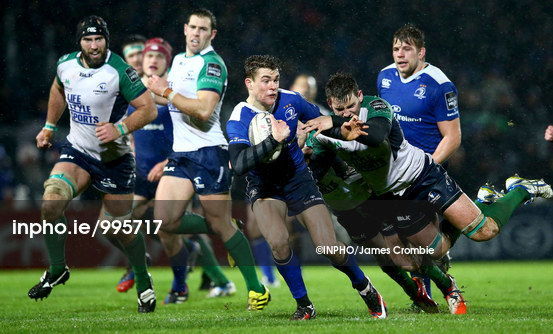 The nil on the scoreboard is certainly a worry. Leinster will feel as though they made a bit of a statement on New Year’s Day. The men from the west had been making noise while their counterparts from Dublin had been shipping criticism but this win in dreadful conditions at the RDS completed a brilliant Christmas period for Leo Cullen’s Leinster.

To tell the tale of this contest we need to dwell for a minute on the strength of this Leinster side as it will inform the real question on everyone’s mind. Have Connacht lost their way or are they still on track to make major progress by the end of this third campaign in the Pat Lam era?

The blues had a big win away to Munster leading into this contest and thanks to this 13-0 triumph leapfrogged Connacht in the standings with their ninth win in eleven PRO12 outings.

Hardly a crisis in Leinster then, especially when you consider the young players on show here who are making huge progress such as Gary Ringrose, Josh Van Der Flier, Peter Dooley and Ross Moloney.

Those names are mixing in with a strong established core. Sure, at international level major questions still have to be answered by the likes of Dave Kearney, Jordi Murphy and Martin Moore but in the PRO12, these lads pack some punch.

The enforcers are there too. Mike McCarthy lorded it over his former teammates in this one. Frustrating, hassling, earning penalties and making a general nuisance of himself. Sean O’Brien burst off the bench and all but helped seal the win for good measure.

Connacht lost away from home to a team that have more depth, more star talent and perhaps most worryingly more effective agitators.

Yet the nil on the scoreboard has to rankle most of all at the end of this. The fact that their efforts over the 80 minutes, on balance, would have probably yielded a losing bonus point had we been treated to a more accurate and competent refereeing performance then we got from George Clancy here will rankle too, but will be forgotten come seasons end.

Clancy had a shocker in the second half after a solid first half display. Connacht’s advantage in the scrum yielded nothing but one penalty against and some odd ‘no calls’. Two key knock-ons were spotted and deemed incorrectly to have gone backwards while the hugely questionable Leinster try from Josh van der Flier drew national attention for how it was called by the experienced official.

None of that should negate the fact that Leinster were better here in the second half. They deserved their win based on their use of possession against the wind, numerous line breaks and effective offloads, support lines of running and disruptive work at the breakdown. Connacht lost all those battles and misfired in the lineouts for good measure.

That’s now three defeats in a row for Pat Lam’s men in the PRO12. The injury crisis is almost over, yet Robbie Henshaw and Denis Buckley remain major losses on the injury front. They bring that X factor that has been missing in the three tight contests. A four point loss in Cardiff, a seven point defeat to Ulster that could easily have gone the other way and this bitter pill in Dublin for good measure. It all adds up but is by no means a death knell.

That brings us to the hear and now. Connacht sit third in the table, seven wins from eleven and very much with an edge on the field in the race for the top six. Most outsiders will expect them to fall off the pace now that the league is at full gas and teams like the Ospreys, Cardiff and Edinburgh are making huge progress while Munster and Glasgow have plenty in reserve too.

On Sunday, Lam’s men visit Llanelli, he has Peter Robb, Danie Poolman and James Connolly back available for that one and Tom McCartney and Jake Heenan should be sharper for the game time they got in this one. The lineout can only improve while the scrums might well yield a lot more if refereed differently. Finlay Bealham’s form at loosehead is a strong plus for example.

The Scarlets might be top but their form line is strikingly bad of late. You can go back to the start of November when they came into the RDS with six straight wins and lost 19-15 to see the start of a run that has included seven defeats in their last nine. Their only two victories in that run came at the hands of the Italian sides Zebre (20-12) at home and Treviso away.

For Connacht, the aim will be clear in this the first of two meetings with their top four rivals from Llanelli. Focus on their own game by halting the slide in some key departments. Improve the line breaks, support runs and offloads. Sort out the lineout and start converting visits to the 22 into points while sorting out the high penalty count that is mounting while they are in possession by winning the breakdown tussles.

If they get that right, the defensive foundations seem good and another major moment in their season could be in the offing. Players like Ultan Dillane, Eoghan Masterson, Jack Carty and Tiernan O’Halloran will be crucial next Sunday. They’ll need the experienced heads around them to take ownership too.