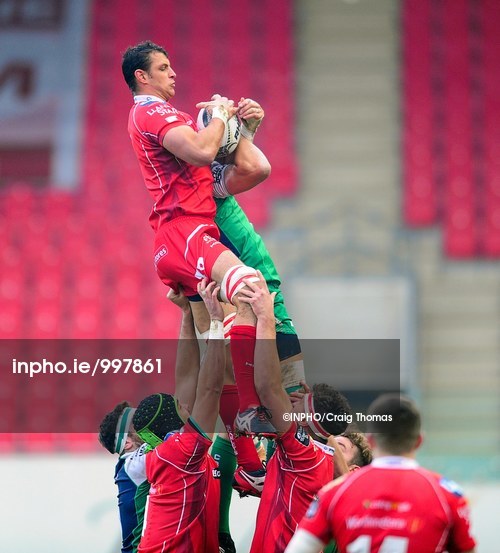 They thought they had won it. An ice cool Jack Carty had just stood over a kick on the ten metre line and drilled it between the posts. Confidently turning away long before it had even reached it’s target. Subtly pumping the air with a clinched fist. It should have been the crowning moment in a fantastic performance from the entire Connacht team. It wasn’t.

Connacht had a 120 seconds to see out a dramatic victory and the failed to do so. One rush of blood to the head from Ronan Loughney was ultimately to blame. His over exuberant clearout of a ruck was needless and hugely costly as after he was sent to the sin bin. Steve Shingler stepped up and drilled what proved to be the winning kick through the posts.

It wasn’t simply down to one man however. The decision from Connacht to try to play out those final two minutes from inside the their own 22 was hard to defend afterwards also. A long kick down the field would have made sense in the wet end of game conditions. Trusting their defence in an end of game scenario.

Pat Lam was a picture of calm after the game. Diplomatically sidestepping the questions about one inexplicably abysmal decision from Welsh TMO Paul Adams to disallow a perfectly legitimate try from Eoghan Masterson. Choosing instead to focus on the positives and the progress his side were making.

Underneath it all however he must have been raging. His side led 10-0 on the half hour mark. They had 60% possession and 65% territory during the entire contest. Their conversion rate in the 22 was once again below par and there were lots of other niggling aspects. Bundee Aki’s daft first half yellow card for starters. Poor tackling and alertness for both the second half tries from the hosts too.

This was defeat number five for Connacht on the season. Seven wins and five defeats means they are now slipping back into mid table. Yet four of those defeats have come away from home at venues where points gained might well be viewed as a bonus at the outset of the season. A direct comparison with the same 12 fixtures played last year show’s Connacht are 16 points better off with ten games left in the PRO12 season.

All is certainly not lost, Connacht have the European distraction for two weeks now starting in Brive next Saturday night. Then return to face Scarlets at the end of the month. The losing bonus point here means they have a shot at edging their top six rivals in these two fixtures with a win by eight or more points. On the basis of this game, that’s well within their capabilities.

The complete tale here is largely encouraging. Connacht came away from the venue of the best Welsh region with a dominant scrum display. More metres made in possession. Another hugely encouraging display from their ever improving young out half and more scoring chances created. Their hunger for pouncing on loose ball – epitomised by Masterson – disruptive charges at the breakdown and big hits in the tackle all signified a more clued in hungry side.

Over the 80 minutes Connacht were over the line four times. The TMO took three tries away from them. Two correctly and a third from Masterson so incorrectly that it would provide strong evidence in a case for removing non professional referees like Adams from such important positions. Referee Marius Mitrea might have saved the situation had he been able to clearly view the pictures but a sub standard big screen at the venue made his job tricky to say the least.

Connacht led 10-3 at the break after a very impressive first half effort. The early stages were evenly matched. Bundee Aki’s sin bin for a no arm shoulder charge, that was also late, proved to be no major setback as the hosts failed to capitalise. Connacht then had the extra man when Regan King saw yellow for killing the ball. The westerners notched ten points during that period.

The try came from a turnover and a breakout from their own 22, with swift hands along the line and a brilliant final pass from Tiernan O’Halloran that released Matt Healy. He wasn’t going to be caught. The flying winger almost had a second at the end of the best attacking move of the game when he received a sublime long range Craig Ronaldson pass but was deemed to have just lost control of the ball over the line.

Having said all that, when the stats are examined more closely, some home truths surrounding the Scarlets second half fight back emerge. Despite having so little ball and territory, the home side made more line breaks in the 80 minutes. Six to four. They beat more defenders in open field running. 19 to 14, than the westerners.

Therein lies the evidence that maybe for experience and craftiness alone, the Llanelli men deserved this victory.

The return fixture with the Scarlets is on January 31st and it will mark the end of a record breaking 16 straight weeks of rugby. The one week break will be welcome. It might well be best for Connacht to view that game as the start of a season defining run of extremely winnable games.

The mistakes and poor decisions that led to defeat here need not define the campaign. Any victory in west Wales would have been a major bonus in the season plan and the lessons learned in defeat might prove crucial as the campaign evolves.

The rest of the teams and pundits in the PRO12 are no doubt now dismissing Connacht as early season wonders that are finding their level at this key juncture. However, those who are watching closely are aware that, based on continuing improvements in key areas, such an assertion might be dangerously off the mark.