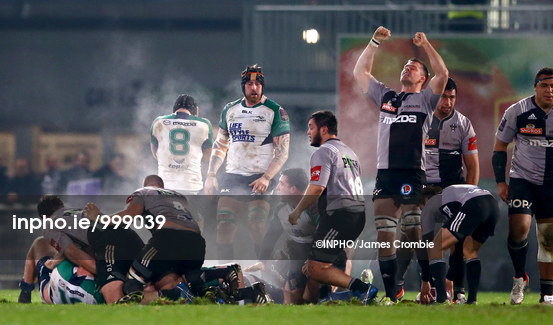 By Rob Murphy in Stade Domenech

Everyone in the Connacht camp will be hoping Saturday night in the French midlands was very much rock bottom for their season. It has to be. Otherwise all sorts of problems will emerge and the air of positivity around the westerners will dissipate rapidly.

The hugely impressive start to the campaign by Pat Lam’s men between September and November has created a bit of a cushion and made this current blip in form less season defining as a result. However, they’ve pretty much used up all their wriggle room since the start of December with just a single win in seven outings in all competitions.

In the six encounters leading into this one, the level of performance kept everyone feeling confident. But this clash on a cold night at the Stade Domenech brought the first signs of a process breakdown. Connacht missed out on a clear chance to secure top spot in the pool and possibly guarantee a crucial home quarter final in the process.

As a result of this last gasp defeat at the hands of a pragmatic, well drilled and ruthless Brive side, that offered little in the area of creativity and pace, Connacht are now set for another away trip in the last eight of this competition. A bonus point win over Enisei this Saturday will all but certainly secure that but the more alarming scenario is the general downturn in form.

The winning kick from Laranjeira came on 80 minutes, it broke a tie and drove yet another late dagger into Connacht hearts. Ulster’s late try, Shinglers kick for Llanelli and now this. Three times in four games Connacht have watched points slip away in the final five minutes. This has turned into a critical passage in the season for the province and the words of the coach and captain underlined how they weren’t about to downplay the problems.

“That’s probably the worst game we’ve played all season,” said a clearly exasperated Lam outside the dressing room tunnel. “ We are extremely disappointed and gutted. Brive didn’t have to do anything to win that game, we just handed it on a plate to them through our own mistakes.”

Lam also lamented the poor discipline and his captain John Muldoon concurred when he spoke as well.

“Too many mistakes, too many inaccuracies.” said Muldoon. “just poor play which hasn’t been a part of our game for maybe two or three years now. It’s very frustrating, we scored three tries, they scored none. For the second week in a row our indiscipline cost us badly, they scored 21 points from penalties and that shows you that we gave away way too many penalties.”

In a game of momentum swings, Connacht started with a bang scoring a brilliant try after just 42 seconds from young centre Rory Parata. A well planned kick off saw Danie Poolman rise high in the air and win possession, the quick recycle in the 22 led to a phase under the posts before Aj MacGinty made the key half break, passed to Muldoon who timed the final pass well for Parata.

The missed conversion from MacGinty was a sign of things to come but at that point, all seemed well in the camp. Yet throughout the rest of the half, Brive controlled the game through their large ball carrying forwards and their ability to make just one or two fewer mistakes against their western opponents.

Try scoring opportunities were repelled by Connacht in the 22 but the boot of Laranjeira proved invaluable as he insured most of their hard work yielded points with three kicks from four for a 9-5 first half lead. MacGinty had missed one further very kickable penalty during the period and had linked fairly poorly with half back partner Ian Porter who looked shorn of any confidence and made numerous kicking mistakes.

The contest really failed to deliver in terms of quality throughout but Connacht did offer something in terms of sustained attacking spells that yielded try scoring chances in the final half hour. The introduction of Denis Buckley certainly made a difference and by the time Caolin Blade took to the field alongside Jack Carty, Connacht’s backline had a better service too.

A surge for the line from John Muldoon completed a brilliant spell of attacking play on 53 minutes and actually gave Connacht a 13-12 lead at that point. MacGinty had kicked a penalty on 42 minutes but his kicking woes continued when he hit the post for that conversion and within five minutes Laranjeira slotted the home side back in front after a high tackle before stretching the lead to 18-13 with another hick on 62 minutes.

As the clock ticked on into the final seconds, Connacht found themselves in their own 22 and very much in desperate mode, that’s where the world class ability of Matt Healy came to the fore as he broke out of the 22 with a deftly executed chip and catch before launching a second chip to beat the fullback and surge for another 30 metres.

The brilliance of the former Lansdowne men put Connacht in place, Brive gave away a penalty in the 22 and rather than kick to the corner, John Muldoon took the ball in his hands and did a tap and go, catching the hosts off guard and scoring try number three with less than 100 seconds remaining.

Almost inexplicably, Jack Carty missed the conversion however and that left the sides level with one play remaining, on the short restart, Peter Robb and Tiernan O’Halloran collided and the subsequent scrum gave the French a chance to earn a penalty off the indecisive referee Craig Maxwell Keys. They got it and their hero Laranjeira nailed the kick.

So that leaves us with Connacht needing a bonus point win next weekend and then hoping other results don’t go against them in a spectacular way. Brive will need a bonus point win in Newcastle to stay top however, so the odds remain in favour of the westerners.

If that goes to plan, an away quarter final in either Grenoble, Sale or Edinburgh is the likely outcome. That fixture will be sandwiched in between crucial PRO12 games away to Ulster and at home to Munster. They are not making life easy for themselves.