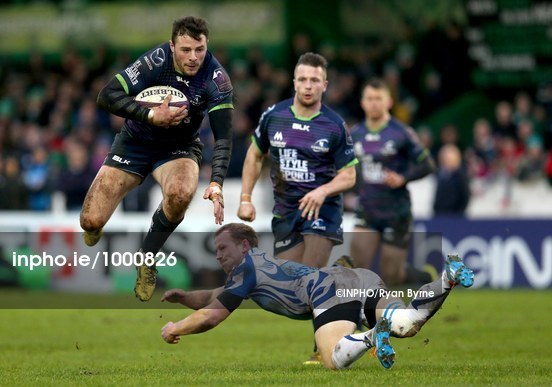 Perhaps the end justifies the means. Connacht were never in much danger of missing out on the quarter finals before Saturday’s comfortable Sportsground win over the emerging European rugby outpost from Krasnoyarsk but a home quarter final was out of the question and that appeared to be a missed opportunity. Yet when the last eight pairings were confirmed on Saturday night, the landscape looked a lot brighter.

Grenoble will be favourites in their April showdown with Connacht and they’ll expect to win but Lam’s men will have no fear either and they’ll also feel that the fixture is eminently winnable. That would leave them with a home semi final (a scenario that wouldn’t have been possible had they secured a home quarter final) probably against Harlequins. Now that would be something.

We’re getting way ahead of ourselves here but this competition is back on the table as a genuine target and you get the feeling from the players here that they are fully aware of what is possible. One important proviso for all this will be injury count come spring, a fully fit squad will just about be able to handle Leinster at home, Ulster Away, Grenoble away and Munster at home in four weeks, anything less and that becomes hugely challenging.

In the meantime, Lam and co will be keen to park thoughts of Europe and dreams of finding their way to a final in Lyon in May. The Pro12 returns and while they remain in the top 4, they’ve clearly lost their way of late and face second placed Scarlets at home this weekend. They will feel they owe the west Wales men after the last gasp loss in Llanelli but the visitors will see this as a huge opportunity to put the Connacht threat firmly in its box.

Saturday’s eight try win over the Siberian side that have done themselves so much justice in this competition with wins over Newcastle and Brive on Russian soil was certainly the most complete performance in quite some time. It also underlined the reality that these games aren’t always a ‘no win’ scenario, four tries in either half and a consistent flow of high paced attacking rugby meant this game was supremely entertaining throughout.

John Muldoon knew from the outset that a bonus point win was essential. In that scenario, the only way Connacht could be usurped by Brive was if the French side scored a bonus point win in Newcastle. Few thought that likely. For that reason, the Portumna man went against the normal Connacht wisdom and played with the wind from the start in a bid to get the job done early. It proved a sharp call.

The encouraging aspect of this performance came in the clear signs that the squad are still enjoying each game and playing with a real heads up positive attitude. Ahead of the visit of the Scarlets this Saturday, some felt this game would serve little benefit in building confidence but watching Kieran Marmion darting through rucks making big gains, Matt Healy notching two more tries and Danie Poolman nabbing yet another as well, the confidence was palpable.

The early pressure didn’t yield a quick try and the decision to let Aj MacGinty kick three points on eleven minutes to settle the nerves paid off as five minutes later, Tiernan O’Halloran scampered over for the first try. By the 20 minute mark, the second try had come, a sweeping break just inside their own half saw Henshaw fire a pass out to Healy who had work to do but pace to burn. He beat two defenders for a brilliant try.

Enisei had virtually no possession in the first half, Connacht had to make just seven tackles during that 40 minutes. The Russians defended with vigour and ferocity but the wave upon wave of attacks took their toll. Denis Buckley bundled over from the side of a ruck for try number three marking his first start back from injury with a five pointer and right at the end of the half, Danie Poolman scored in the corner for the bonus point.

The conversions were a problem, three were missed but with a half time lead of 25-0, that wasn’t a major concern. For Lam and his management team, the way Connacht maintained the tempo from the very outset of the second half must be a positive. Robbie Henshaw’s try just after half time, made by a brilliant MacGinty break, underlined as much.

Enisei did respond with a try from Victor Orlov after a lineout catch and drive but before the end, Tom McCartney, Healy and Caolin Blade all had tries to seal the win. The kicks continued to be missed, just one of those scores was converted by full time, that had become the major concern.

Heading into this weekend, Connacht’s goal kicking stats for the last six games are at just above 30% and that’s including the Llanelli fixture earlier this month where Craig Ronaldson and Jack Carty managed 5/5. Ronaldson is back fit this weekend and might well get the tee again in what is likely to be a tight game.

The squad have had some tough weeks of late but face into the a run of fixtures that might define their Pro12 campaign. After Saturday, they have their first weekend off since early November. Then they travel to Newport and Parma before facing the Ospreys at home and Edinburgh away. All during the Six Nations period. The most important phase of the season is upon us and judging by last Saturday, the Connacht team are unflustered and still very much enjoying their rugby.