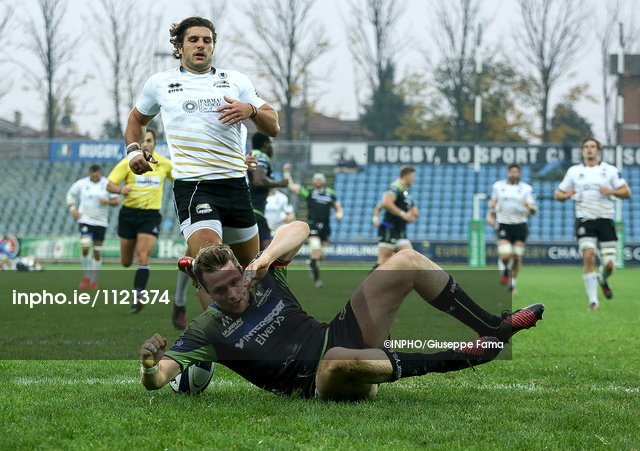 Connacht 66 Zebre 21
by Rob Murphy at the Sportsground

The week to week analysis over a long season season tends to get caught up in trends and inevitably as a result, the bigger picture is rarely contemplated. With that in mind, here’s the bottom line for all things Connacht rugby in early 2017, after this facile ten try demolition of the hapless Zebre, Connacht are on the verge of a groundbreaking step forward within European rugby.

The overall trend on the field has been defeat after defeat since early December, with the one glorious exception coming in the home tie against Wasps. That poor run of results combined with coaching departures both now (Dave Ellis) and in the future (Pat Lam) were feeding into a sense of impending gloom around the team. Yet it clearly won’t take much to change all that and a result in Toulouse next week will go a long way to transforming the mood.

Throughout the last six weeks, Pat Lam has been cut a frustrated soul but he has remained resolute all the same, linking results to disruptions to the training process. Sure, Connacht have managed to field strong teams on paper but they were patched up squads in most fixtures and the disjointed prep has been reflected in the performances.

The lunchtime kick off on Saturday was a different story in terms of attack at least, Connacht were fluid and ruthless and but for a dreadful seven minute lapse early on where they shipped 14 points to the otherwise abject Parma based side, this was not far off a perfect display in a fixture of this kind.

Afterwards, the fourth year head coach pointed to a much improved scenario for training as a key factor in the result and that crafted narrative was re-emphasised by Tiernan O’Halloran. The addition of three new emergency signings had bolstered numbers in sessions and both Lam and O’Halloran are expecting a similar week in preparation for the trip to Toulouse.

It must be said that Connacht could have spent the week playing Golf and still have had enough preparation to trounce the Italian franchise from Parma that is worryingly on the verge of collapse financially and showing now signs of progress on the field. They led 14-7 after 12 minutes but by half time, they had shipped five more tries to trail 40-17.

The opening try for Connacht was brilliantly crafted off a lineout that functioned superbly well throughout the match. Matt Healy finished it for just his first try of the season, Tiernan O’Halloran’s break was key to the score. It might have settled Connacht a little too quickly as two handling errors in their own 22 gave Zebre platforms to score first half tries from Johan Meyer and Federico Ruzza.

Connacht cut down on the errors from there and scored a second try after a move that started in their own half resulted in stand-in outhalf John Cooney going in from long distance. The dubliner was fully settled into the role by the time he placed a brilliant grubber kick in behind the defence for O’Halloran to score a third try and the bonus point was secured on 29 minutes from a lineout catch and drive with Finlay Bealham scoring at the back.

The tries kept coming with Kieran Marmion and Craig Ronaldson adding two before the break and perhaps most impressively Connacht didn’t ease up after half time. Healy, O’Halloran and Marmion all added to their tallies while Caolin Blade also scored after Zebre had nicked a third from centre Mattia Bellini.

The task now is far from simply but hardly daunting either. Connacht will take to the field in Toulouse on Sunday going for the win to secure a quarter final spot but aware that a losing bonus point will be enough as long as Toulouse don’t secure a four try bonus. At the other end of the scale, it is worth noting that a bonus point win for Connacht would see them top the pool but even then, a home quarter final is somewhat unlikely.

All the while, the backdrop of key injuries has expectations low. Ultan Dillane and Bundee Aki remain sidelined, Jack Carty and Denis Buckley are doubtful while Quinn Roux, Jake Heenan and countless others are also likely to miss out yet Connacht are in a position where a losing bonus point should prove enough to progress ahead of their opponents Toulouse. That’s got to be a goal that this squad of PRO12 Champions believe to be attainable.

The main focus will be on Connacht’s gameplan, Lam insists nothing should change from the processes that brought success in October and of course, last season. That means ball in hand high octane rugby. Toulouse are big and powerful and will want a slow tempo. Should Connacht give up six knock ons in their own 22 as was the case against Zebre on Saturday, the French giants will punish them severely.

Yet on the whole, the task seems a daunting one. The October win over Toulouse was a triumph of guile over grunt but the man at the centre of Connacht’s exploits was a certain Mr Aki. His absence alone makes this task beyond difficult and yet, here they are with one shot at glory at a venue where four years ago, in Lam’s first season a team of rookies and unproven emerging stars beat a Toulouse side far superior to today’s incarnation.