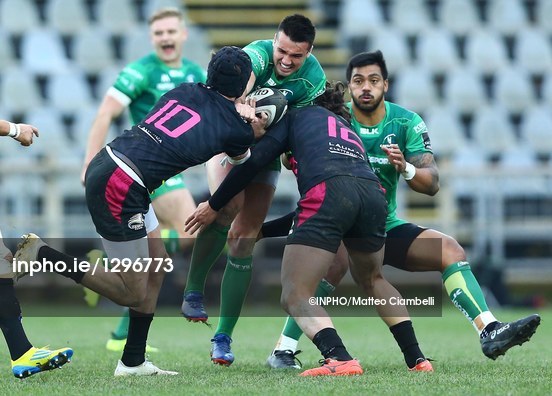 There is little need for Connacht coach Kieran Keane to demand a huge improvement after his side was outplayed by Zebre in Parma last weekend. The players know it themselves, and this is a perfect test to produce a response worthy of former PRO 14 champions.

Pride is at stake, as is the opportunity to extend the lead at the top of pool five, and it would certainly help the confidence of this side that appears to be struggling to come to terms with changes to the playing structures.

Brive will not make it easy. They lost away to Worcester by 30-20, but are a different side in France. Although struggling in the TOP 14, their Challenge Cup is on the line this weekend, and they have shown in the past just how difficult they are to beat at Stade Amédée-Domenech.

The two sides faced each other in 2015 and Connacht came away losers by 21-18 after a undisciplined performance. Brive capitalised on seven penalties; Connacht, despite bagging three tries, missed five kicks, and Kieran Keane’s side will need to remain composed and clinical against this French outfit.

It will be another test of Connacht’s mental fortitude, particularly after the hurt of last weekend’s defeat in Italy.

“Against good opposition you will be punished if you are not clinical. They capitaised on chances, we didn’t. It sounds simplistic. We are not overly worried, but we need to be more accurate.

“Brive is a team of seasoned pros, who are hugely physical. They maul a hell of a lot, are direct, and they can cause probelms, so we are expecting a physical battle.”

There is little change to the injury list, although Craig Ronaldson, Peter Robb,m and Stacey Ili have returned to training. Hooker Mond McCartney missed last week’s fixture with a “niggle” and should be available, as is Bundee Aki and Pita Ahki who has been registered for Europe in place of Rory Scholes.

Following defeats to both Cardiff and Zebre, this weekend’s fixture becomes more significant to halt the slide. The loss to Cardiff can be explained with questionable refereeing decisions, but Connacht still came away with two bonus points; the defeat to Michael Bradley’s Zebre was considerably worse.

Coach Kieran Keane insisted Connacht had prepared well all week. |”We were fully aware of the threat they posed, especially at home.The performance was not good enough, but we need to pick ourselves up and build some momentum again.”

Against Zebre, Connacht were frustrated by a side that, with nine returning internationals, produced a line-speed in defence and an eagerness at the breakdown, and Keane’s side never hit the ground running. They were not helped by a failure to convert chances in the opening half which increased Zebre’s growing confidence. Connacht enjoyed more possession in the opening 20 minutes, but the score was still 3-0 in favour of the hosts after Italian international outhalf Carlo Canna struck his opening penalty after 10 minutes. In contrast counterpart Steve Crosbie missed two efforts at goal, while Connacht appeared to lack purpose and clinical finishing when opting to run three penalties.

A dominant scrum kept them on the front foot and centre Tom Farrell continued to seek out gaps, but they were hampered by some poor decision making. By the half’s end Zebre had taken control, and while fullback Tiernan O’Halloran did well to prevent Giovanbattista Venditti from grounding the ball for what looked like a certain try, Canna added another three-pointer for a 6-0 half-time lead after Eoghan Masterson was yellow carded.

Connacht grabbed some momentum when they opened their scoring with a determined restart – Farrell was quick to react to loose ball and Crosbie adding the extras. But the lead did not last long when Canna added a third penalty after 61 minutes.

The introduction of Jack Carty and James Mitchell added some impetus to the Connacht attack, and Finlay Bealham had a glorious chance but wthe only reward was a penalty which Carty kicked to put Connacht ahead by 9-10.

That lead was turned on its head by a superb restart from Zebre and a try from openside Johan Meyer, with Canna pushing them to a 16-10 lead.

Connacht never recovered as Zebre completed a comfortable victory with a Canna drop goal and a Venditti try.