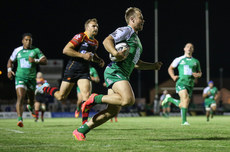 Rob Murphy at the Sportsground

The sun will be shinning on Connacht over the next three months. Every single one of their opening seven fixtures are winnable based on last season’s form. The World Cup has decimated many forthcoming opponents and if Pat Lam’s men are to take another stride forward this season, this is the time to make hay.

More than anything else, the four points were all that mattered on Friday. As opening day games go, it was compelling with plenty of exciting flourishes but it also had the familiar opening day rustiness with disjointed spells costing Connacht during a topsy turvy second half.

The Dragons will feel they should have won this. Why wouldn’t they, they had the ball on the edge of the Connacht 22 with three minutes remaining, trailing by two points and seemingly in full control of the contest at that point. However, Connacht had the answer, up stepped young Kiwi signing Neipa Fox-Matauma as he robbed possession at the breakdown for an invaluable turnover.

The Dragons were now off guard in defence and Connacht exploited this with a quick attack. Bundee Aki got the ball and ran cross field first before bursting through a gap and making what turned out to be a 40 metre break that paved the way for Fionn Carr to score a try just minutes after being introduced as a replacement. Game over.

This was a finish full of fine margins and this will be a season full of tight decisions just like this. Year three for Pat Lam promises to be the most challenging, especially after the progress of last season where Connacht finished just shy of the top six with more points and wins than ever before.

There have been no big signings whatsoever. Promote from within is the policy across the board, laudable when it comes to both coaching, where the likes of forwards coach Jimmy Duffy and Assistant Attack Coach Conor McPhillips have been elevated and playing, where great strides have been made in player development over the last few years.

The big signings of the past three years have largely failed to work.

Second row Craig Clarke was besieged by the dreaded concussion problems and Mils Muliaina just didn’t make the on field headlines they had hoped he would make, that leaves us with Bundee Aki as a possible success but his undoubted talent still hasn’t come through over a consistent period the time for the team and he is yet to score a try.

Connacht started Friday’s game at the Sportsground with three new faces in their 23 man squad. Openside flanker Fox-Matamua stood out in the first half for pace, good ball carries and tenacious work at the breakdown. The 24 year old was a little less prominent in the second half but made the telling impact right at the end.

That’s encouraging for Pat Lam as the number seven slot continues to be a big concern. Jake Heenan’s injury problems are likely to extend well into the winter and Willie Faloon is now back in Ulster so Fox Matamua is a major cog in the wheel for the coming weeks.

Connacht led 14-3 at halftime, having scored the games opening try mid way through the half from a lineout catch and drive finished off by Fox-Matamua. The Dragons responded well after halftime, scoring a superb try from their big new signing at number nine Sarel Pretorius who was by far the stand out player on the field for both sides.

That score didn’t rattle Connacht and they responded with a very well worked try from a scrum in the 22 with Danie Poolman finishing off in the corner and a penalty from the rock solid Jack Carty had Connacht 22-13 ahead with ten minutes to go. Not long after that however, James Thomas scored for the Dragons to get them within two and set up a dramatic finale.

Carr’s try won it for Connacht but there was still time for a mistake on the restart from the westerners to yield a scrum than a penalty for the Newport side and up stepped winger Tom Prydie to kick a long range penalty with the very last kick of the game to rescue a well deserved losing bonus point for his side.

Next up for Connacht is a trip to the Glasgow Warriors this Friday night and a huge opportunity for a win at a venue where they would normally struggle. The League champions have 20 players unavailable due to World Cup commitments. New assistant coach Dan McFarland knows more than a thing or two about Connacht but time will tell if he has enough firepower to make it tell this weekend.