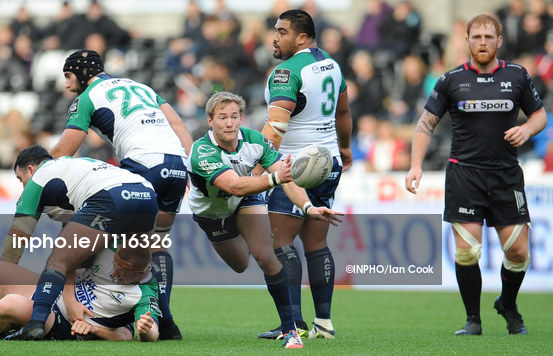 THE momentum continues for Connacht and Pat Lam after Saturday’s enormously significant away win at the Liberty Stadium in Swansea. It was just Connacht’s second victory in 15 attempts against the Ospreys and ended an 11-year run without a win in the west Wales venue but, most importantly, it keeps Connacht joint top of the table heading into another crucial weekend.

Edinburgh visit the Sportsground this Saturday (6:45 kick off) in the latest in a series of vital fixtures that could prove pivotal at the end of the season. The Scots will be close to full strength and still reeling from their surprise 19-11 defeat in Zebre, while Lam’s men are in a good place after their best performance of the season so far.

Bundee Aki stood out for most observers, nabbing the man of the match award and notching a crucial second half try. The number 13 role might well be a factor in freeing up the former super 12 try machine to do a lot more damage to teams.

In the pack, 20-year-old Shane Delahunt stepped up to cover for the injured Tom McCartney and produced a superb display both at set piece and in open play. The back row excelled with Eoghan Masterson key to that, but it was a day where you couldn’t find much to fault in the entire unit as they consistently delivered against the home side.

Having lost their first three games, the Ospreys were in better form coming into this one thanks to a win away to Treviso and seemed odds on to continue the revival with the returning Justin Tipuric back on the bench and a strong looking tight five starting. Connacht were higher up the table but the form had been mixed.

The first score of the game went to Sam Davies from a penalty after some good early pressure from the home side. Connacht responded well with sustained pressure leading to a penalty that Carty would miss on the right, but undeterred and influenced by the lively Kieran Marmion, they continued to probe and with a second chance, Carty made no mistake.

The first try went the way of the Ospreys with Eli Walker making a superb break before finding Dan Baker on the inside. The number eight charged over for a try that stood after a TMO review for a forward pass, the conversion tailed wide but the lead was 8-3.

The second quarter belonged to Connacht. Aki’s first big moment came soon after that try with a strong break in midfield. With Craig Ronaldson at 12, the former Super rugby star appeared much more of a threat throughout and his big gains caused real trouble. He was stopped just shy of the line and Ospreys centre Josh Matavesi was sin-binned for diving over the ruck and killing ball.

Carty opted for the three points to narrow the gap to 8-6 and Davies could not convert an opportunity to respond with a penalty soon after. That was merely a brief respite from the waves of Connacht attacks. After a Marmion break off the back of a five-metre scrum, wing Matt Healy was there to take the pass and cross over for an 11-8 lead with the touchline conversion missing.