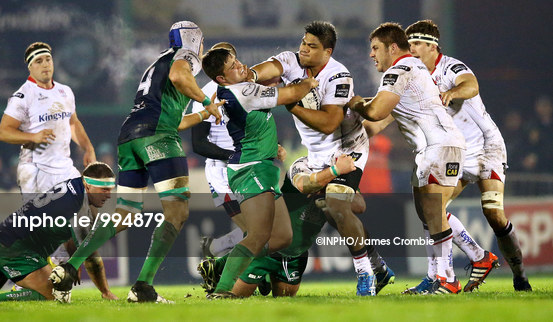 There is not much time to take stock and putting this defeat in context will be easier once the lights go off at the RDS arena on New Year’s Day. By that point, Connacht’s position within the inter-provincial hierarchy might be a lot clearer. But for now, this St Stephen’s Day gut punching loss to Ulster is a hard one to assess.

Les Kiss and his young squad are blazing a trail after a patchy start. The 15 that took to the field at a sell out Sportsground on Saturday were still brimming from their back to back wins over a Toulouse side that sit second in the Top 14.

In the absence of the likes of Iain Henderson, Jared Payne and Tommy Bowe, Ulster seem to have lost no ground whatsoever. Heck, and don’t say this too loudly but they might be playing better. It’s not that Alan O’Connor, Stuart McCloskey and Rory Scholes are better individually but they are certainly adding a collective burst of energy to Ireland’s form team.

Ulster arrived in Galway with five wins and four defeats on the PRO12 campaign. Trailing Connacht and well aware that upstarts from the west would be a threat to their top 4 hopes if a result wasn’t garnered here.

The form sides from the island locked horns and for long periods cancelled each other out in a real 80 minute struggle for superiority. The game was won in the last ten minutes. Ulster had the know-how and confidence to figure out how to win, while their opponents froze for the first time all season.

This defeat is very much the first real body blow of an incredible campaign to date for Connacht. Watching how they react in the forthcoming hugely challenging away ties against Leinster this weekend and Llanelli on January 10th should be fascinating.

Previous defeats in this campaign away to Glasgow and Cardiff were certainly frustrating, as a victory was certainly in the offing in both cases. But this was the first time were they trudged off the field second best against a full strength opponent and on home soil.

Purely in terms of the game’s most memorable moments in the 22, one could argue that Connacht were hard done by here. The opening ten minutes were full of vim and vigour from the men in green who had Ulster scrambling.

Twice Connacht had a catch and drive from a lineout that looked like it would yield a try only to be halted. They also stretched Ulster with quick hands only for Eoghan Masterson to knock on after a sweeping move. Had he left it to Niyi Adeolokun on the outside…

Overall however, the match numbers tell a story. Ulster had 55% of the territory and 53% possession in the contest. Seven line breaks to Connacht’s four. No less than 17 defenders beaten to Connacht’s eleven. 17 turnovers to Connacht’s 15. It’s hard to argue with all that, the better team appears to have won here.

You can take the 20 minutes either side of halftime and sum them up as a tight tense battle. Ulster’s 3-0 half time lead came from the boot of Paddy Jackson. More on him anon, while Connacht’s number 12 Craig Ronaldson missed two straight forward chances to level either side of the break. Those missed kicks really were costly.

The moment that broke the deadlock was ironically Ulster’s lowest point. A sloppy mistake on the Connacht 22 saw them turned over and as replacement out half Aj MacGinty hacked the ball down the field he was then tripped by Luke Marshall. The TMO spotted it, Marshall saw yellow and Connacht had their chance.

Not long later, MacGinty kicked Connacht level with a simple strike and the game was delicately poised for the final 15 minutes or so. Yet the key turning point came just before Marshall returned from the bin. Connacht had won a penalty on halfway when the theretofore brilliant Ruan Pienaar got caught in two minds in possession and got turned over.

MacGinty stepped up to kick for the corner but took too much out of it and missed the touch line. It was to prove the last opportunity for Connacht to get a platform in the 22 and there were 12 minutes left.

Ulster pinned them back from there. Pat Lam’s side finding the heavy ground and sliding momentum a little overbearing at that point and choosing to kick to touch for safety on three occasions rather than the usual counter attacks from deep.

Ulster kept their patience. Forced the error. Kicked into the 22. Set up a lineout and from the subsequent attack scored underneath the posts. Nick Williams getting the match winning try and Jackson converting. A dogged display from the men in white and yet another win over their western rivals who haven’t beaten them since 2012.

In such a tight game, Ulster won the battle of the half backs. Pienaar edging Marmion overall in a compelling battle while Paddy Jackson again showed why he’s Ireland’s form out half.

The fast running style from Connacht might not be suited to heavy ground. A losing run now could undo the huge momentum they have built up since the start of the season. Leinster will look at this result and think the westerners have had their bubble burst no doubt. Time will tell if they’re right.