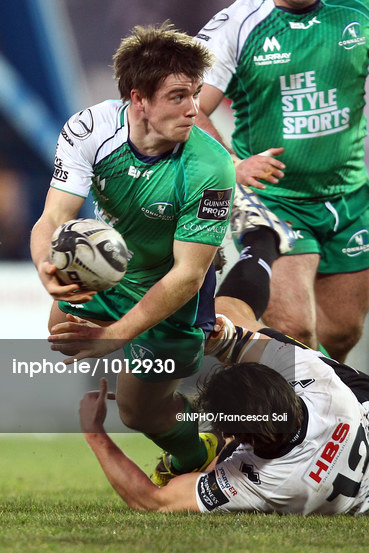 By Rob Murphy at Stadio Lanfranchi

Summarising the tale of this outlandish 10 try contest is challenging to say the least, but here’s an attempt. A vastly superior Connacht side in terms of skills, speed and accuracy, served up an odd display in Parma on Saturday night. But ultimately delivered another try scoring bonanza against Zebre for a third successive bonus point win in PRO12 rugby.

As a result, they sit top of the table heading into round 16 this weekend where they will face a surging Ospreys at the Sportsground. There will be plenty of awkward video review sessions likely to take place before that contest. You see, Pat Lam may well be aware that there were a lot of positives to take from this contest, but his sides lethargic efforts for long periods in this contest were the source of concern too.

Zebre were missing nine of their first choice Italian internationals and a couple of other key men through injury. They still had a stronger side out than we saw in the 50 point drubbing the previous week in Dublin. They certainly retained possession well for long periods, earning their four tries in the process but at the heel of this particular hunt, it seems abundantly clear that Connacht were always in control of this contest. The westerners were always going to win.

The statistics are startling. Connacht led 17-13 at half time but Zebre had dominated with 67% possession and 72% territory. Tt was two tries to one at that stage but it was a one score game because of a last minute first half Zebre try from Johan Meyer after a botched Connacht lineout.

Up until that point, the home side had been repelled time and again by stern defending.

The two first half tries for Connacht came very much against the run of play but were both neatly crafted. Matt Healy getting the first after a sweeping move along the backline that involved a brilliant pass from Aj MacGinty and some superb work from Healy to first accelerate away from his opposite winger Giulio Toniolatti before rounding the otherwise solid Mils Muliaina.

The second try came from Kieran Marmion who caught the home defence napping with a simple quick tap penalty five metres from the line. The infringement that gave him the platform had come from desperation in the Zebre defence after a rip roaring Connacht attack involving MacGinty, Craig Ronaldson and Aly Muldowney.

In the second half, the trend largely continued. Connacht attacked with ruthless precision turning almost every promising foray into Zebre territory into tries or kicks at goal. The only two exceptions included an intercept pass thrown Denis Buckley that led to Dries Van Schalkwyk’s try for the hosts.

The half ebbed and flowed in an almost bizarre way, with seven tries notched up by the two sides.
Connacht had four of those second half tries. Healy had two to complete a hat trick. One coming from a MacGinty grubber kick (the American international had by far his most impressive game to date). The other down to his dancing feet and super speed out wide. Niyi Adeolokun also popped up with a couple, both coming at the end of some lively attacking play.

The pattern was key to the sense that this truly a bizarre rugby encounter. Each time Connacht scored in the second half to seemingly open up a comfortable gap, Zebre replied. The scored went from 24-13 to 24-20 and on like that By the time Zebre crashed over for a bonus point try from Frederico Ruzza they were trailing by 48-34 but there was still ten minutes left for them get more out of the game. That’s why Connacht chose to kick a penalty a minute later to put the game beyond all doubt.

It was daft stuff. The kind of rugby that entertains the neutrals who want tries but worries the observers trying to ascertain if this Connacht side can kick on and beat the best once the Six Nations concludes and the race for the top four play offs heats up. Any game where a team that loses by 17 point manages to make 483 metres with ball in hand (Connacht made 523 metres) really does belong in the odd category.

Yet perhaps the best way to assess what happened is to put it in an overall context. Connacht are the first side to take a four try bonus away from Parma this year for example. On current form, they are the only PRO12 side capable of scoring six tries off less than 40% possession in a game. That is a testament of their exciting brand of rugby that has all the hallmarks of what you see in the southern hemisphere Super rugby championships rather than any of the European leagues.

The influence of Dave Ellis and Andre Bell is telling in that department. Lam and his management team will hope that it can prove key to Connacht’s daunting run of interprovincials in March and April and for their trip to Grenoble. All that might prove academic however should the injury count get out of hand.

The powerful and consistent Eoghan Masterson picked up a season ending knee injury here to end his run of brilliant form in the number eight jersey. His obvious replacement in that starting role is Eoin McKeon who had been called in for this one but picked up a foot injury that is a concern for next week. Craig Ronaldson also picked up a knock that might rule him out for the Ospreys clash.

He kicked well throughout, as did MacGinty, the two combined for nine from ten on the goal kicking. Worries and gripes aside, this is a record third successive bonus point win in the PRO12 for Connacht. A total of 15 points from a possible 15.

An inform Ospreys visit the Sportsground this Saturday, in a game bizarrely fixed for just after the conclusion of England and Ireland in Twickenham. If the Welsh side can be toppled, Connacht will go to Edinburgh the following week knowing a win there will all but guarantee Champions Cup rugby next season. It’s not even Easter, what a season.