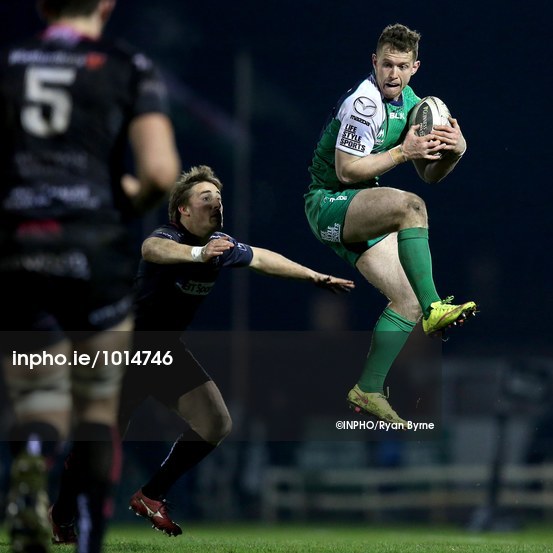 It’s easy to assume that at some point in the near future the bar will be set too high for this defiant young bunch of players in green, but why waste any energy contemplating that negative scenario? Why not instead focus on the records that continue to tumble. The winning streak that rumbles on and the sheer inspirational brand of rugby this team produces every week.

On Saturday evening after the big match in Twickenham, 5,279 supporters marched up to the high point on College Road for the latest instalment of this ground breaking campaign. A huge test awaited their team. Connacht were up against the league’s other form side. As a result, it should surprise no one that the game attracted the biggest crowd of the weekend and produced the best rugby of the round and possibly the season so far.

From the opening salvos – where Connacht carved out a couple of brilliant tries – to the second half drama where the visitors battled their way back into the game with their eye catching brand of rugby, the game ebbed and flowed and captivated all who where there. A cracking game and a monumental victory for good measure.

And measure this, Connacht have now bettered their all-time points record in the competition by four to a total of 54 with eleven wins also a record. They have 45 tries, that’s eight better than the next best attack in the league. They are 12 points clear of fifth spot. They face Edinburgh next week with little pressure and safe in the knowledge that a win will all but guarantee a spot in the Champions Cup next season.

Pat Lam would have snapped a hand off for a one point win on Saturday as unlike the three games that had gone before, this was a big test. The start was ideal. Once again high octane and relentless and the Ospreys were taken aback. They had probably prepared themselves for a huge test but this is a new Connacht playing a brand of rugby like few other sides in the league and it can be hard to get to grips with.

Two superb offloads underlined the opening tries. Matt Healy conjured up the first for Bundee Aki’s try after a surging attack that involved sharp carries from Ben Marshall, Jake Heenan and Aly Muldowney. In a tight situation the league’s top try scorer somehow found the space to draw the tackle and find his centre with a deftly timed pass.

Niyi Adeolokun matched that not long after in setting up Aj MacGinty for Connacht’s second try. Again drawing the tackle first and timing the offload to the man on his shoulder for a key score that gave Connacht a 14-3 lead at that stage. It didn’t seem secure, the Ospreys had shown flashes of their best in the early stages and more was expected.

The second quarter belonged to the Welsh side. Ben John scored in the corner after a sweeping counter attack from a turnover. The pace and focus they were bringing to the game was clear for all to see. Approaching half time, they were in the lead after Dan Baker charged over to finish another attack that started in their own half and forced Connacht to scramble.

The one point lead was short lived as Craig Ronaldson’s penalty had Connacht in front 17-15 at half time but the game was finely balanced. On the resumption Connacht turned the tide again as Matt Healy spun through a tackle and sprinted clear of two other hapless Ospreys to score his ninth PRO12 try of the season. All that stemmed from a Danny Qualter lineout steal. The Roscommon native had come on for Marshall at half time and excelled.

Osprey’s response was the try of the game as the outstanding Rhys Webb marked his return from injury at scrum half with a brilliant try. It included some scintillating attacking play from Josh Matavesi and out half Sam Davies among others. Soon after, a Ronaldson penalty stretched Connacht’s lead to five but the Ospreys weren’t done.

The game’s pivotal moment came with 15 minutes to go as Sam Davies burst clear from 25 metres out and sprinted for the corner. Only to be halted by Kieran Marmion’s tackle. The scrum half didn’t seem to have a hold of the Welshman who was just two metres short. Davies jumped up and scored as a result but after a TMO review it was deemed a double movement. A contentious call to say the least.

That was a break for Connacht and the hosts grasped it with Ronaldson again on target with his third penalty soon after that drama. The Naas man kicked six from seven to continue his side’s resurgence in the area of goal kicking and that certainly played a key role in a win that will live long in the memory.

So let’s just recap. In late January Connacht took on the Scarlets needing to end a poor run of form through Christmas. They won with a bonus point and matched that outcome away to the Dragons and Zebre for 15 league points. Here, they added four more points against a key rival for the top four, extended the PRO12 win streak to four and importantly denied the Ospreys a single point from the fixture.

On Friday, they complete their run of games during the Six Nations period with a clash away to Edinburgh before settling into the longest break of the season (two weeks) in mid March. What lies around the corner are three successive PRO12 inter-provincials and a monumental away quarter final at Grenoble in the Challenge Cup. Daunting? Yes. Overwhelming? Hardly.