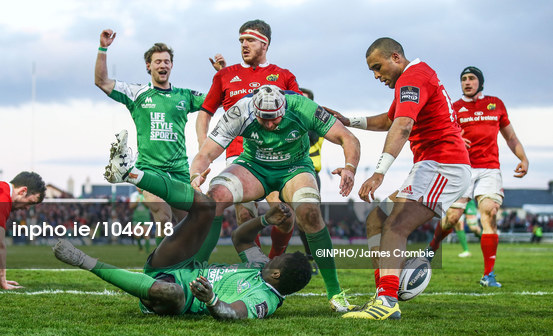 Beyond all reasonable doubt, it is now safe to say that Connacht are a top four side in the PRO12. Moreover, it can be said with absolute certainty, that they are also a better team than Munster.  Saturday’s all encompassing 21 point hammering completed an historic season double against the men in red and copper-fastened this reality.

There is a new order on the Irish provincial landscape and Connacht are no longer province number four. Saturday’s tussle confirmed that the westerners have a stronger crop of young players, a more cohesive and inventive management team, better front row forwards and star players in key positions that can outplay the best of Munster.

Will it last? For a while anyways, but not forever of course. Munster are not going to go away. They brought the guts of a thousand people to the Sportsground on Saturday night, in the midst of an almighty crisis of form and confidence. So they are still getting the backing from the faithful. Added to that, they had eight players under the age of 25 in their squad which suggests there’s talent emerging from their academy too.

Yet for now, the provincial order is where it should be. The team playing with ambition and exuding positivity on and off the field are regularly beating a team full of negativity, be it in their game plan or their post game comments. Munster began the match with a wonderful try, full of skill and creativity, before quickly regressing into the shell of mediocrity that has underpinned a wretched 12 months.

The promising Johnny Holland made that try with a deft offload to Jack O’Donoghue, who found the rampaging Simon Zebo on his shoulder. The line and speed from the full back was more akin to what you regularly see from this current Connacht side, it was brilliant. The Cork Con full back threw the ball in the air and roared at the crowd. It looked like it was going to be a day for Zebo headlines. Unfortunately for supporters in red, the was his last chance to roar.

Sure Munster had one more strong moment. Connacht were caught forcing the game in their own 22. Bundee Aki knocked on after an O’Leary pass and the hosts were punished accordingly with Mike Sherry eventually getting over in the corner after a lineout. At that stage, the visitors led 14-6 with an hour of rugby still to play.

The scrum launched the fightback. Three time Irish international loosehead James Cronin couldn’t handle Finlay Bealham and looked some way off the standards set by the still to be capped Denis Buckley on the Connacht loosehead side of the scrum. Three first half penalties at scrum time underlined as much and brought about the game’s first key turning point with Cronin binned for losing the bind and dragging Bealham to the ground by the shirt.

That kick started the westerners, Niyi Adeolokun’s first try of the day came not long after. His bad pass had put Bundee Aki on the back foot. But the game’s most prominent figure merely looked on the mini crisis as an opportunity. Exploiting the bolting defence with a side step and his lethal acceleration before linking with the indefatigable Bealham who found Adeolokun with a perfect inside pass.

From the restart Connacht shot back on the attack from inside their own 22. Taking on the opposition with scant regard for where they were on the field. This team will not sacrifice their principles on the basis of a perceived risk. Aki made 80 metres to set the platform for a second Munster yellow card, this time for Billy Holland, and a penalty try from a scrum.

The half time lead of 20-14 was the launching pad. Adeolokun’s second try off a neat kick through from Robbie Henshaw and a brilliant try finished off from Bealham after an Ultan Dillane charge for the line, sealed the win and the bonus point during a frantic second half. Munster couldn’t muster a single score, in fact that shipped 29 unanswered points in the hour after Sherry’s score.

The repercussions from this game will linger long into the summer. For Connacht, the season is already a thundering success but the potential for more progress is tantalising. A home semi final will be secured with wins over Treviso away or Glasgow at home. That could be key to their hopes of causing the upset of a all upsets and gatecrashing grand final day in Edinburgh on May 28th.

In the meantime, this side continues to develop at an almighty pace. Bundee Aki is a name that will be linked with Connacht sporting folklore for decades to come. The man mountain of courage, skill and character is the on field inspiration for Lam’s project. Along with Aly Muldowney, Tom McCartney and captain John Muldoon, he is a key leader on the field.

Around those four men, the young players are flourishing in their roles on this team that still hasn’t got to grips with how far they can take this rise. ‘Don’t look up’, ‘just keep climbing’ will be the mantra from their supporters. Well Sean O’Brien is doing that, he took on and out battled the one and only CJ Stander. Eoin McKeon is doing that, he led the tackle count. Shane O’Leary is doing that, he took his game to a new level.

The week off isn’t a bad thing. Aki picked up a knock in this match and will be monitored by the best medical people they can find in the west. Heck on the whole island and beyond if necessary. All the while, Craig Ronaldson, Tiernan O’Halloran, Danie Poolman and Aj MacGinty are on on the mend. With any luck, in 14 days time, the training ground will be a little fuller. Not that luck plays much of a factor around Connacht rugby these days. Heady days indeed.