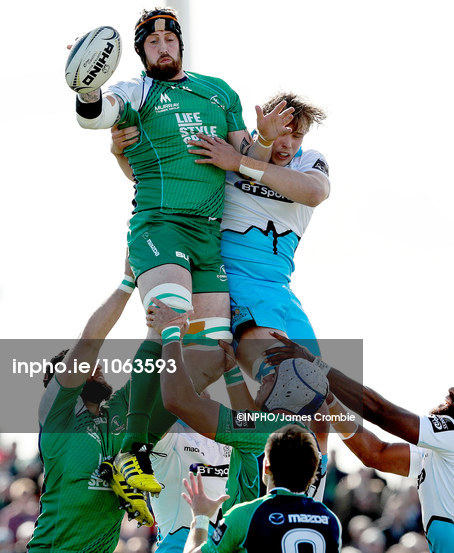 Did you ever think you’d see a day like this at the Sportsground? Say what you like about incremental progress, smart signings, a well established hugely successful academy, the ground improvements, the expansion of administrative staff better marketing.

Did you ever think you’d witness a match, an atmosphere, a result like this for a Connacht rugby team in such a big game, against such a star studded opponent, at the penultimate hurdle of such a successful season? There are more than likely great days ahead, and the past has had some good days too, but don’t underestimate what this result has done for sport and rugby in the west of Ireland.

This was pressure, the kind of pressure that has sprung up more than once since Christmas. A run of four defeats around the New Year helped create a must win back drop for the home games against the Scarlets, Ospreys, Leinster, Munster, Glasgow and Glasgow again. Each game was hailed as a defining fixture, each game was looked upon as nothing more than a one score contest, each game wasd by the fearless group men in green shirts.

Time and time again this season Connacht have stood up to be counted. The Foundations for this come from a bustling academy, producing players at a faster rate than could be reasonably expected for well over a eight years now. The Eric Elwood regime provided a base, a platform of being competitive in Europe’s best competition and then came Lam with his philosophies, mantras, and a gra for a challenge. What a three years it has been.

By the time John Muldoon leads his side out on Saturday, there was no more doubt about how things stood. This was a massive moment for the province, only a fifth ever semi final in any competition and a chance to go further than ever before. Too much had gone before to stop now. There was an air of pressure but a sense of confidence oozing from the players into the stands and from the supporters onto the field.

The first half was one way traffic, Connacht topped 70% in territory and possession, had five times as many line breaks, missed a third as many tackles and scored the half’s only try, as well as a having a second struck off. They had right to feel they should have been further ahead than 10-3 in one sense but in another sense they were relieved by the break as in the last play, Leone Nakarawa almost scored only to be held up by Aj MacGinty and Ronan Loughney.

Niyi Adeolokun’s try was the difference. It came from wonderful moment of inventive play from Bundee Aki who executed a perfect grubber kick for the former Trinity flyer to burst onto. He out paced Stuart Hogg, beat him with a side-step and swerved by two colliding defenders before sprinting home from 35 metres out at the Bohermore end. The huge crowd behind the goal roared him home.

That proved to be Connacht’s only try. Eoin McKeon’s first half beauty was struck off for an earlier knock on spotted by the TMO, while Adeolokun’s seemingly match winning score in the corner was also disallowed after an accidental offside was spotted in the video review. Frustrating and pedantic for sure but consistent with the type of decisions we’ve seen all season.

Glasgow had their moments in the second half, the hugely impressive Nakarawa stood head and shoulders above his teammates in every possible way with some inspirational and mind boggling moments of brilliance but he just couldn’t find a moment to really break the game wide open. His try raised hopes but the missed conversion proved costly. MacGinty kept Connacht five ahead with penalties and Glasgow just couldn’t get closer.

The passage of play that most encapsulated the 2016 version of Connacht’s soul and character came during the last eight minutes when Rodney Ah You was in the sin bin, the disallowed try was still at the forefront of minds and for all the world, the mission seemed about to fall apart. Not on your life, Andrew Browne, Sean O’Brien, Dave Heffernan, Peter Robb and JP Cooney were all on, making hits, smothering potential offloads and adding that last minute impetus the cause needed.

This was a day for the ages, a true breakthrough one for the mighty Adeolokun who seems to be only scratching the surface of his potential with eight tries this season and 80 metres from 6 carries here. Tiernan O’Halloran was a constant inspiration from full back, Aki a patched up and fearless leader, Aly Muldowney unflinching, Ultan Dillane indestructible. We could go on.

The final scene was perfect, as the perilous and outstanding Aj MacGinty kicked to touch for the final whistle, the cameras and the eyes of 7,800 had to have been drawn to a Portumna man in his 30s with a big beard and a 15 years of rugby stories to his name. Game number 274, Captain, and one more game to follow. John Muldoon has his eyes on the Pro12 title. Do you believe it’s possible now?