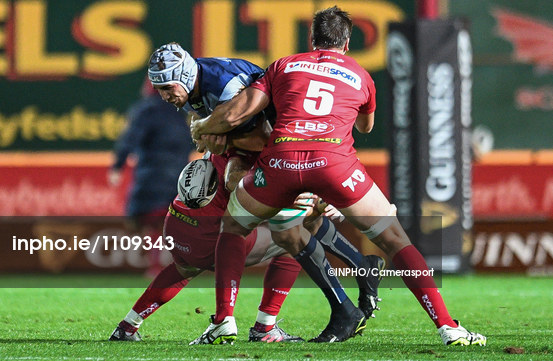 No one expected this start but let’s begin this report by trying to find a stable footing, a sober assessment that most people should be able to agree upon. After this nine point loss in west Wales on Saturday evening, it’s now zero points from three games for Connacht and, unbelievably, the word ‘crisis’ has appeared in some media. So, as a result, some grounded thinking is badly needed.

The rest of the league have completely forgotten about Pat Lam’s group of trailblazers in the west and they’ll point to all sorts of reasons for it. If we can leave aside the fourth game in Zebre where Connacht trailed by 12 at half-time before a timely downpour led to a postponement (that’s not a good story either but it is an incomplete one and therefore should be disregarded) and focus on the trio of defeats, we must first acknowledge the strength of the opponents.

Glasgow and the Ospreys are serious title contenders, so too are the Scarlets. These were not easy fixtures for a full strength Connacht in the championship winning season just gone. Two single score victories and one single score defeat was the return in 2015/16, add in injuries and the accepted reality that Lam’s side have lost three key men from the title winning squad and maybe a more realistic assessment begins to take shape.

Long before Connacht’s breathtaking run of results in May, the news that Aly Muldowney, Robbie Henshaw and Aj MacGinty were leaving was out there. At that time, the common consensus was very much along the lines that no matter what happens in the final few weeks of the season, Connacht would be in something of a mini rebuild come the new campaign.

On top of that, a ‘let’s make hay while the sun shines’ mentality took hold around the team. A sort of ‘now or never’ feel underpinned the story. First around the notion of securing a top six spot, then in regards to making the playoffs and finally in relation to securing the entire bloody title. It all happened so fast, it was spectacular and wonderful in its execution. Glorious in fact and we all were swept along.

Somewhere along the way, we forgot about the rebuild, we thought the trophy would engender belief in players slightly below the level of the aforementioned trio and assumed that the entire squad wouldn’t take too much of a step back, we were wrong to do that but not spectacularly wrong either, and Saturday, at a rain soaked Parc y Scarlets, provided plenty of reason to hope that things can change.

Some pre game questions were answered in a positive way. Quinn Roux did add a destructive physical element to our play at the breakdown and helped Connacht win the contacts, Ultan Dillane alongside him anchored it all. Our front row continues to be one of the strongest and the bench replacements don’t seem to weaken us, JP Cooney is improving for example.

Niyi Adeolokun is better now than he was in May and that’s truly electrifying when you start to contemplate the potential this 25 year old All Ireland league bolter has in terms of international level in the coming months. Elsewhere we seem a little off key in the backline, the Bundee Aki and Eoin Griffin partnership isn’t working and the aforementioned Pro12 player of the year is being well marshalled by opponents and showing clear signs that it is getting to him.

There’s still a lot to come from that backline though, Jack Carty had a serious injury and is on the mend, John Cooney is still to come in to provide more competition and back up at nine, then there is the impending return of the likes of Peter Robb and, perhaps crucially, Craig Ronaldson and don’t forget Cian Kelleher who demonstrated flashes of brilliance here late on.

The improved forward play led to a much sharper intensity to Connacht’s play in the first half here. They led 8-7 at halftime. Aled Thomas had missed three kickable penalties for the home side and their support were letting players and management know they weren’t impressed. The grumpiness only intensified when Adeolokun scored a sumptuous try two phases after a five metre scrum and involving slick hands from Denis Buckley and Tom McCartney.

The Scarlets try came from a misread in defence from Bundee Aki but still required some world class skills from Jonathan Davies along the line to release the electric Liam Williams. Jack Carty’s late penalty restored Connacht’s lead and they held it almost to the hour mark before the Scarlets found a crucial second try and added a conversion and drop goal soon after. Game over at that stage.

Minutes before Williams scored in the corner, exploiting tame Connacht defence on the blindside of a scrum, Connacht had a moment that encapsulated a stilted attack. They were short on ideas despite holding possession in Llanelli’s half. A crossfield garryowen was the chosen option, the kick was hit and hope, the chase from Griffin and Aki lacked conviction and a shaky Thomas won position and made 35 metres to change momentum. It was a turning point.

From that point on, Connacht looked out on their feet. The 60 minute effort had taken a lot out of them and the Scarlets looked to have more in the tank with Aaron Shingler epitomising their superiority in the back row battle at that stage.

They finished strongly, deserved their win and should shoot up the table fairly lively. For Connacht, Edinburgh on Friday is now a must win but that does not constitute a crisis either. They are figuring things out, focused on improving and owe hardly anyone any explanation for this start so soon after one of the most unlikely triumphs in the history of professional rugby. No need to panic just yet.