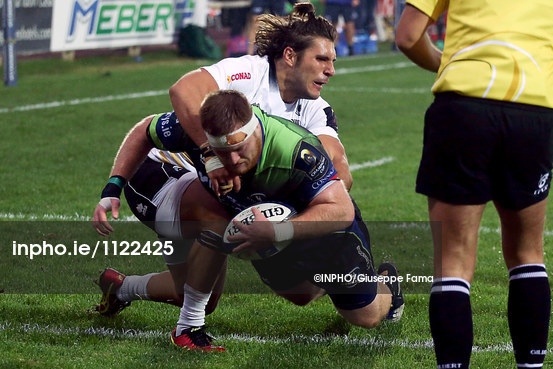 What a four weeks this has been for the men in Green. From an early season stumble, Connacht have emerged looking like a better version of their former selves. The PRO12 Champions are improving and the ceiling for what they can achieve as a group is still unclear. One thing is for certain, as a group, they seem to think there’s lots more scope for further progress.

This was their 13th encounter with Zebre in four short years, they’ve been in the same pool as them three times in Europe and met them eight times in the PRO12, (not counting last month’s rain off). They’ve won all 13, sometimes in scrappy encounters, sometimes in loose shootouts and the odd time with plenty to spare. This was something new though, a ruthless, merciless second half display with a neat first 15 minutes thrown in. They came, saw and conquered.

From the outset Connacht were in command in Parma, while the first ten minutes didn’t yield scores, the visitors completely dominated possession and territorial stats attacking with gusto and hitting rucks with as much fire and power as we had seen eight days before in Galway against Toulouse, as expected, they mindset was right, much better than what has been on show a month earlier in the abandoned game here.

The hosts were quickly behind too. Stacey Ili had a dream first start after two appearances from the bench. He would make 12 carries in total for a 107 metres of gains and a hat trick of tries in the process. His first try was the most straight-forward, capitalising on a perfectly placed kick in behind the defence by the commanding Jack Carty at out half.

The conversion from Craig Ronaldson on the left hand touchline with his left foot, almost underlined the focus and within 60 seconds any doubts that Connacht had come to make a statement were completely gone. Rising young out half Carlo Canna was the poor unfortunate who took a pass behind the centre only to be met by a rampaging Peter Robb. The powerful hit dislodged the ball straight into the hands of Jack Carty who ran the in from ten metres inside his own half.

The floodgates didn’t open though and for the second quarter of the contest, Connacht made errors and lost their shape a little. Zebre had a foothold when Sean O’Brien was sin binned for straying offside and needlessly playing the ball but missed an easy penalty seconds later.

If that was frustrating for their management, what Olivero Fabiani did minutes later must have had them outraged. The hooker, bit Quinn Roux on the arm in a ruck and was spotted on video replay. The straight red is likely to be only the beginning of some serious disciplinary issues after that moment of stupidity. The hosts will point to that as the point where the game was done but while Connacht had lost some momentum, they were still in total control of the contest.

After half time, the tone was set early by a much more composed and accurate visiting side. Carty was at the centre of the good decision making again, executing a superb crossfield kick early in the second half for Ili to score his second try while his opposite wininger Gabriele Di Giulio lay on the ground injured. The bonus point soon followed, in the shape of a penalty try minutes after Tommaso Castello was sin binned to reduce the hosts to 13.

During the sin bin Connacht notched 21 points with Cian Kelleher and Conor Carey adding tries during the spell. More tries probably should have followed but it was Tommaso d’Apice who scored a consolation for the hosts before Connacht scored again. Kelleher and Ili with tries in the final quarter to crown the display of dominance.

For Kelleher the two tries crowned a fine performance from full back where he had 15 carries and was perfect under the high ball. Peter Robb slotted into 13 and carried 12 times for 96 metres. His huge hit in defence made the second try and his big breaks allowed Connacht the luxury of leaving Bundee Aki on the bench and resting throughout the game.

Up front, 22 year old Shane Delahunt and 21 year old Sean O’Brien stood out for their never wavering work rate and big carries with ball in hand. Connacht were in total control of the ball making 662 metres with ball in hand to Zebre’s 120. It was a facile win for sure but it came from a hugely impressive mindset and a clear determination to maintain the high standards set in the previous three weeks.

This was the youngest side Lam has fielded so far this year, away to a team they always beat but often only after a bit of an arm wrestle. Wasps and Toulouse should also pick up the maximum points from the struggling Italians but their 20-20 draw in France on Sunday has left Lam’s chargers with an early advantage in the group and a real reason for optimism.

Two home wins over Wasps and Zebre could prove enough for Connacht to reach the last eight but considering what they achieved last year and the new level they’ve reached in the last four weeks, it would take a brave man to suggest to them that they should settle for that in this pool. Wasps in Coventry are next up in December, Lam’s men will go there with nothing to lose and full licences to have a go. As if there is a time when they don’t have that freedom.