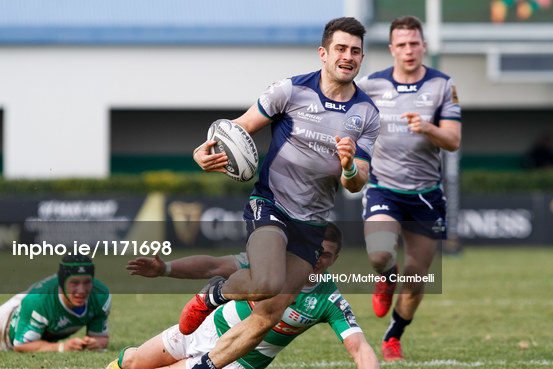 While Sunday’s bonus point win on the east coast of Italy was facile to say the least, the performance will have added to the sense that Connacht are on their best run of form of the entire season. The four try triumph at a venue where they have had plenty of difficulty in the past suggests that a corner has been turned and a good finish to the season is very much on the cards.

For sure, there have been some good days this year and stand out victories at the Sportsground in particular but this three game win streak is the longest of the entire PRO12 campaign to date and with Zebre in Galway this Saturday, it is about to become their longest winning run in all competitions.

The target for Connacht has been simplified in recent weeks. Automatic qualification for the Champions Cup is now all but mathematically out of reach after the Scarlets and Ulster continued their recent good form with big away wins at Munster and Zebre respectively.

A top five finish is now required, finishing ahead of Glasgow in sixth won’t suffice as the Scottish are guaranteed one spot in the Champions Cup alongside the top finishing Welsh, Irish and Italian sides. That leaves four other spots and Munster, Leinster, Scarlets and Ulster have those places all but locked up.

The positive from that is Connacht have two months and seven games of rugby where the pressure will be off somewhat and the entire goal will be to just win games and build form ahead of the end of season two game playoff series with a team from England and France and a second side from the PRO12 for the last Champions Cup spot.

Shorn of their first choice Italian squad members, Treviso struggled in this one and shipped twenty points in the first half before managing to get on the scoreboard. In fact by the time Tiernan O’Halloran finished off a brilliant move for the fourth try, Connacht led 34-5 with nearly a quarter of the game still left.

The opening scores came from the boot of the highly accurate Craig Ronaldson, so it was 6-0 by the time the first try came from Caolin Blade who finished off a now trademark move for the Monivea man as he darted over from the fringe of a ruck six metres out catching the defence napping.

The second try of the half came from Finlay Bealham who burst clear two passes out from a ruck and went on a 40 metre break to score, sidestepping the full back with some nifty footwork. That was 20-0 and while Treviso managed an unconverted try before the break, their challenge was already withering.

Connacht’s third and fourth tries were well crafted, Ronaldson got the third after a neatly placed kick in behind the cover from Jack Carty, while the fourth score came from O’Halloran and was at the end of a sweeping move involving a sequence of brilliant offloads from Nepia Fox Matamua, James Cannon and Quinn Roux.

Bundee Aki marked his return from action with a solid 62 minute display and should be raring to go again Friday as an under strength Zebre visit the Sportsground. A fourth win will set them up for the two week break before the trip to Glasgow and the run-in towards those Champions Cup play offs that might yet see Connacht crown a patchy campaign on a high note.