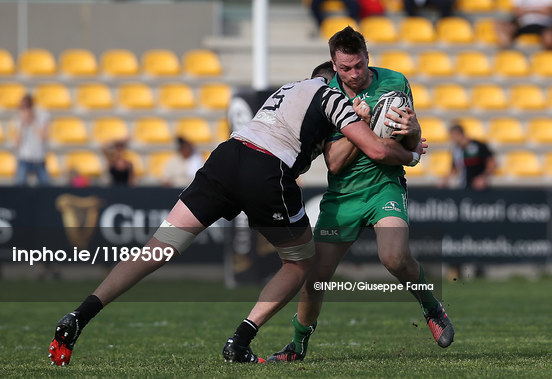 The Craggy crew did not get to view this match, so here is the report from the PRO12 site:

Zebre recorded their first home win of the season with a 25-22 victory over Connacht in their re-arranged Round Three fixture in Parma.

Tries from Stacey Ili and Craig Ronaldson had Connacht two tries to the good after just 13 minutes but Zebre were ahead by half-time after Derick Minnie’s try and two Carlo Canna penalties.

Tommaso Boni and Edoardo Padovani added second half tries for the hosts who earned their first win over an Irish opponent since September 2014.

Connacht took no time at all to get the first score of the game as Josh Rowland broke the Zebre defensive line before offloading to Ili to touch down for an unconverted try.

Canna reduced the deficit after eight minutes with a 40m penalty as Ronaldson was brought on to replace the try-scorer Ili.

And the substitute made an instant impact as wing Danie Poolman burst through before feeding Ronaldson to score a try with his first touch of the game.

Conney converted and the visitors led 12-3 with 16 minutes on the clock and they nearly extended their advantage only for Andrew Browne to be held up over the Zebre tryline.

Flanker Minnie brought the hosts right back into the game though ten minutes later with Zebre’s first try of the game and Canna converted to make it 12-10.

And the hosts took the lead for the first time on the half hour as Canna added a further three points after Connacht were penalised at the scrum.

The second half opened in similar fashion to the first but this time it was Zebre who had the early try as Boni touched down to extend the hosts’ lead.

A Cooney penalty reduced the deficit to 18-15 with 47 minutes played with the scrum-half then replaced by Caolin Blade before Ronaldson missed an kick at goal to bring Connacht level.

The hosts then saw try-scorer Minnie sent to the sin bin but that didn’t prevent them crossing for their third try after stealing a Connacht lineout through Padovani with 64 minutes gone.

The conversion from Marcello Violi was good and Zebre were 25-15 ahead.

Zebre’s Matteo Pratichetti was the second man to be shown a yellow card as Connacht hammered at the door of the hosts’ defence late on.

And Connacht made full use of their extra man when Rowland touched down with Ronaldson’s touchline conversion reducing the deficit to 25-22 with two minutes to play.

But Zebre held on and moved within two points of Italian rivals Benetton Treviso at the foot of the Guinness PRO12 table.