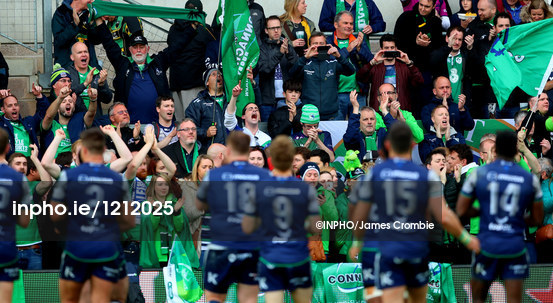 By Rob Murphy at Franklin’s Gardens

https://shows.acast.com/craggyrugby/episodes/5fbd0c99f7be0c153a19abd8
Having first embraced his captain John Muldoon near the dugout, Pat Lam then begin a slow but purposeful walk across the Franklin’s Gardens pitch towards the large group of Connacht supporters that had made themselves seen and heard for the previous coupe of hours. Saints fans were streaming out. The season was over but Lam had one final task to complete.

When he and his squad reached those fans, they received a huge ovation. Lam lingered and then, in his own typical engaging fashion, made it his business to shake as many hands as he possible could. There were easily 250 followers at the game and he had a word for each of them.

It wasn’t the send off he wanted. How special would it have been to have seen him back at the Sportsground this weekend for one final game? The ground would have been heaving, win, lose or draw the scenes would have been emotional. Resembling Eric Elwood’s swansong in 2013, no doubt.

Alas, sport and faith aren’t about neat and suitable narratives. They are instead about cold hard realities with the odd drop of magic every so often. Lam has experienced the hard truths many times in his career. The final season of his four in Connacht has certainly fallen into that category, but the three before this campaign were special, magical even but more than magic because the success was very real and measurable.

It was a success stemming from hard work and endeavour. A success that can be charted and explained. So let’s not just call it magic. Lest anyone try to tell you that it can’t be repeated. Lest anyone inside or outside Connacht try to set the bar lower for this province in the long term in the interest of creating a softer role for themselves or talking the region down because of its size or remote spot on the map.

Lam has shown the way. Everyone knows it won’t be a case of trophies every year for sure, but they also need to know that last season shouldn’t be a drop in the ocean either. Saturday’s six point loss meant that Connacht failed in their objective to maintain their Champions Cup status for a second successive year but the future still looks bright.

The former Samoan star built his revolution first by identifying the culture and character of the region. Then by noting areas where he needed expertise and support. Bringing the right people into his management team and finally empowering young emerging local players with leadership roles and multiple caps.

The one final surprising element for Lam will be the fact that he probably felt satisfied as he boarded the plane on Saturday night. He would never have imagined that anything other than completing his stated goal of Champions Cup qualification would have been enough for such a feeling but all things considered, his side had left the field in Northampton with their heads held high.

Beforehand, the fear was that this could be a landslide. Such was the alarming drop off in work rate, attitude and skills in the Connacht squad over the last seven games that most people were predicting a big home win. Connacht’s game plan had looked predictable. The videos of the Munster and Scarlets games must have made for relaxing viewing for the Saints players.

Two minutes in, they were already thinking of the play off final at the famous ground of the 2014 Premiership champions. Harry Mallinder, the 20 year old rising star at out half, had finished off a sweeping move to put his side 7-0 ahead. Crucially however, Connacht hit back within minutes. Niyi Adeolokun got the touchdown after a neatly planned move that saw Ronaldson grubber kick behind the on rushing defence.

For the rest of the half, Connacht kept Northampton guessing. The half time margin was just 13-10 with the home side having failed to capitalise on some late pressure. Yet on the hour mark Nic Groom seemed to have put his side in full control with a try at the end of some good carries from his forwards but that eight point margin didn’t last long.

Again Connacht answered, this time with Dave Heffernan touching down at the back of an impressive maul and while the conversion was missed, the gap was down to three again. The hosts stretched it to six but couldn’t pull comfortably clear and by the 75th minute mark, they were in their own half, clinging on to that advantage in a game that they should have had out of sight.

Ultimately Connacht failed to convert on that late pressure. There were ifs, buts and maybes to consider in the late drama and the video on Monday would have made for some painful viewing as they agonised over how they might have found that converted late try. Yet at the heel of the hunt, there was no doubting that the Saints had the edge overall.

Louis Picamoles was immense in the closing quarter, replacements of high quality led by Tom Wood and Api Ratuniyarwa played a vital role in injecting some added urgency into a lethargic home performance and while the likes of Sean O’Brien, Heffernan and Muldoon toiled away for the westerners, they just couldn’t find the edge when it was needed.

Lam couldn’t hide his pride at his squad and while he certainly had regrets about the defeat, they weren’t in the same stratosphere as the frustrations he experienced back in January when Connacht fell short of their Champions Cup objective in Toulouse.

This was just one moment in a season of disruption and frustration and that’s a wider tale for another time.

The only story to be told from this one is one of a brave effort from a team that finally found their mojo right at the very end of the campaign and while it was too late, it certainly wasn’t too little. For that reason, Connacht supporters sung proudly late into the night in Northampton and will look forward to a new era with a young squad ready to learn new tricks. If they put in the hard graft over the summer, there might be a lot more magic days ahead. There really ought to be.