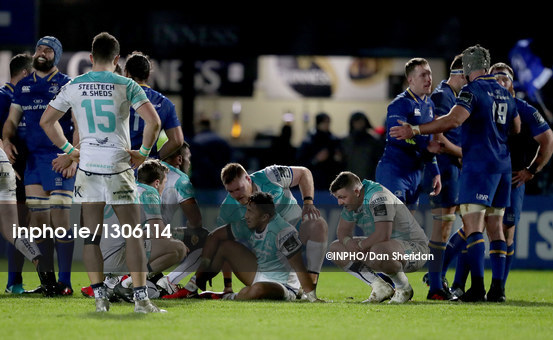 It has been said that the best mountain climbers rely on their feet, their guts and their brains when attempting to scale peaks at high altitudes.

Connacht were on the verge of conquering a behemoth that has stumped them for 15 years on Monday but a rare win in Dublin once again eluded them as heart and soul took over and for just a brief few minutes, the brains took a backseat.

The 28 phases at the very end of the New Year’s Day tussle at a windy and dry RDS in the heart of Dublin will live long in the memory of Connacht folk.
It was a quite literal example of a lack of lateral thinking. The team as a whole failed to grasp the need for some clear and calm thinking in the midst of a glorious opportunity, needing just an unconverted try to snatch what would have been a glorious win at the death.

This was a belter of a contest. A rugby game to saviour. And yet another example of how this Connacht team have turned a corner in terms of performance levels.
Kieran Keane’s men have reacted to their flat display away to Zebre early last month with a run of four high octane, full throttle displays that have yielded 18 tries and restored faith both within and outside the squad.

There are numerous positives to be gleaned from this then, but only after acknowledging that Connacht blew the chance for a famous win here at the death as Leinster’s mix of world class talent and truly exceptional emerging stars clung on for a fine win.

Leinster built a lead in the first 35 minutes of 11-3 against a strong wind and despite a superb late turnaround in that first half, Connacht were always on the back foot after new New Zealand signing James Lowe mesmerised the crowd with his class before Max Deegan scored in the corner.

The stats showed Connacht dominating territory and possession in the opening half hour but all the line breaks and offloads were coming from Leinster.

They had 12 of the game’s 26 clean breaks in that period and also had eight offloads before Connacht had a single one. To put that in context, by the end of the game Connacht led that stat 11-10.

It was all about Johnny Sexton and Lowe and their crafty touches combined with some explosive breaks from the likes of Luke McGrath and Noel Reid.

Something changed underneath the posts at 11-3. The westerners rallied from a position that looked extremely bleak, attacking with more purpose and power.
Garnering points first through Jack Carty’s second penalty of the game, and then through Finlay Bealham who crashed over after a series of phases on the line. Bundee Aki’s break started it all. Ultan Dillane and Jared Butler also had good cameos.

At 13-11 Connacht started the second half in control. But they conceded a needless penalty while in possession and that allowed Sexton to nick three more points from a long range kick on half way.
A seemingly innocuous moment but one that produced the points that were ultimately the difference.

Leinster’s best moment in the second half came from a Connacht mistake. It was enough to restore an eight point advantage. Jack Carty failed to find touch from a hard earned penalty inside the Connacht 22, and Leinster countered back with Fergus McFadden and Sean Cronin combining to cause havoc.
Three phases later Luke McGrath crashed over to underlined the fine game he was having at nine.

It was sink or swim time for Connacht and they certainly didn’t wilt in that situation.

Once again in terms of fitness and even sheer gumption, Connacht had the edge over a more lofty opponent in the closing minutes. They pushed up the possession and territorial domination and reduced the hosts to a scrambling shell as the game entered the final ten minutes.

The second try was a glorious score that might not get the recognition it deserves after a defeat like this.

Powerful forward play had Leinster in retreat but the key was the timing of the call to go wide by Kieran Marmion. Then a long range pass from Jack Carty to the left wing. Matt Healy had to wait for that ball to arrive and watch the gap in the corner close. He didn’t panic. He simply side stepped, one, two and three defenders before scurrying over the line for a huge try.

Games in the €70 a seat RDS can often feel like they are in a different country.
The locals are very welcoming and friendly but always seem a little taken aback by the ability of their opponents, almost like it’s their first time seeing this team called Connacht.
The venue fell silent over the final five minutes. Connacht all the momentum and those travelling supporters who paid the the big bucks to be there, made all the noise.

Yet just when it seemed that everything had been put in place, the kind of craft and guile that had underpinned an effort where they had managed to dominate for long periods, eluded them and the exuberance took hold leading to an attack that started with Dillane almost getting over but ended 20 phases of forward only pick and goes later with nothing to show but 25 lost metres and a Leinster penalty.

In times like this, the actions on the field and the gutted reaction of the players speak for themselves, they were fully aware of where it went wrong. However the bigger picture might well take over in the minds in the coming days ahead of the trip to Munster on Saturday.

They have not lost much ground in their Champions Cup qualifying ambition with a loss away to the league’s best side and they have at least maintained their strong performance levels through four weekends now. Even without Aki, Marmion and Dillane who all must be rested next week, they will travel south with a squad full of belief and learning more and more each week under their new coach. This was a harsh lesson but one which will stand to them on future expeditions.