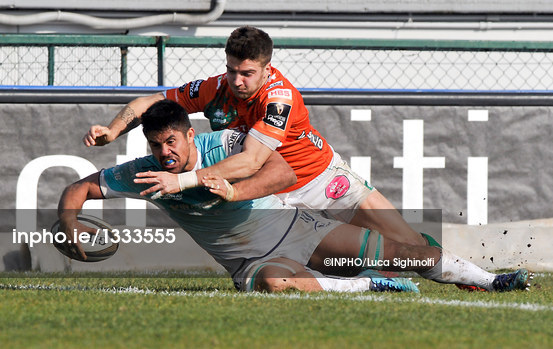 Inevitably, Connacht responded on Saturday afternoon with a result that prevented a crisis, steadied the ship and got them back on their feet in the PRO14 standings.

It no doubt didn’t go as far as to undo the frustration at the shock result a week earlier against Zebre but winning away in this competition is tough and doing so against an in-form Treviso in eastern Italy is a feather in the cap in any campaign.

The bounce back was hardly straight forward. Treviso looked to have the winning of the game after Monty Ioane’s 59th minute try put them into a 12-5 lead.

It was only the fear of falling into a true crisis seemed to envelope this Connacht side and spark them into action.

As has often been the case in the past with this group, a shock defeat was once again followed with a much more competent and determined effort to steady the ship.

What followed was a ruthless final quarter from the visitors, where their superiority shone through.

They scored 17 unanswered points before the hosts rescued a losing bonus point with a third try in second half injury time.

It was a second win in as many years at this venue for Connacht. And a much needed first away win in eight attempts in this competition for the west of Ireland men.

The trip is part of a ten day adventure for Kieran Keane’s men that couldn’t have come at a better time after the lowest point in the campaign just last week.

As a group, they flew to South Africa for a fixture against the high flying Cheetahs fully aware that they will be rank outsiders in the heat and high altitude of Bloemfontein but all set for six days of preparations ahead of the game.

The Zebre defeat might have had some people wondering if Connacht are now right down in the bottom four of the PRO14 in terms of quality.

But this result should dispel some of those fears and reaffirm the feeling that a more mid level ranking would be accurate.

Treviso have played well of late, picking up some good results and producing some stirring performances.

As a result, they were confident here and even slight favourites.

That shouldn’t have been the case however. Connacht were missing just three with Ireland. Treviso had 12 involved with Italy.

Sides in this part of the world are not at a stage where they can sustain such a loss. While they did frustrate the visitors for long periods the difference eventually told as a re-tooled Connacht got back to basics.

Tom Farrell led all backs with 14 tackles. Jarred Butler led all forwards with 16. Butler had the big carry for Connacht’s game changing second try. Farrell led the team with five defenders beaten during the game.

Both players are now integral to what Connacht do well. Their presences on the field at Easter for the Gloucester game seems essential to any hopes Connacht have of causing an upset in that fixture.

All of Connacht’s big names stood out.

As an example the return to the starting lineup of Tiernan O’Halloran was crucial. He made 74 metres on 12 carries, but also introduced a tempo to Connacht’s play and attitude that was sorely missing the previous week.

Matt Healy was a live wire too with 81 metres off ten carries. And both Eoghan Griffin and Cian Kelleher didn’t shirk their responsibilities.

Yet overall, this was a game that changed on Jarrad Butler’s 62nd minute try and only swung Connacht’s way on the scoreboard in the last ten minutes.

This was a game that Treviso, despite all their absentees, looked the better side in for an hour and deservedly led.

This was a game where the loss of home scrum half Tito Tebaldi to injury in the act of him scoring their 36th minute try proved the most important moment.

Had Tibaldi remained fit, the home side would surely have been much better in the second half and might well have won this game.

After half time, Connacht narrowed the gap to 7-5 when Bealham scored but Ioane’s try restored the home side’s lead after a crossfield kick caught Connacht napping.

Jack Carty was making his first start of 2018. He kicked well in the second half, converting that try, and kicking a 71st minute penalty to edge his side in front.

Griffin crowned a fine effort at 13 by bursting through some lacklustre tackles to score a third try and all but seal a come from behind victory.

Ultan Dillane remained with the squad for the flights on Sunday having been released by Ireland.

Keane and his management team will be hoping this historic trip to the southern hemisphere for the group will help build a strong morale and work ethic ahead of the final few months of the season, where the Challenge Cup will be the cornerstone of their efforts.

It is very much one game at a time for the moment. At 5:35 on Saturday they meet a Cheetahs side that have been a revelation in their first season in this competition. They sit comfortably in the PRO14 play off positions chasing a home play-off spot.

Positioning in the conference no doubt won’t be on the minds of anyone in the Connacht camp this weekend. Producing a performance and matching their opponents for accuracy and speed will be the main target. Outside of that, literally anything is possible for this inconsistent group.