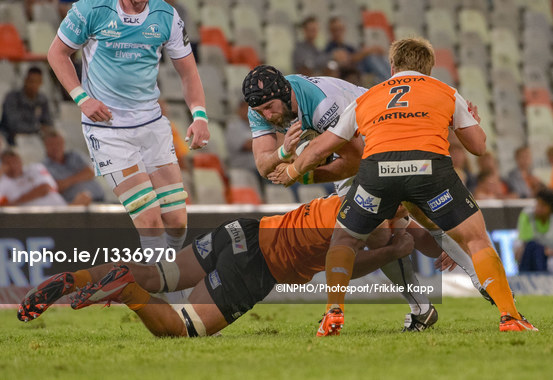 The Guinness PRO14 table may not be a true reflection of Kieran Keane’s maturing Connacht this season.

A “gut-wrenching” last-minute defeat in Bloemfontein against the Cheetahs on Saturday has widened the qualification gap in Conference A, and Connacht’s chances are looking less likely as a result of that blow in South Africa.

A deserving win would have kept them tucked in just behind Cardiff, and stretched their lead over a resurgent Ospreys – both of whom have a game in hand.

Losing to Zebre at home was a nadir. Were it not for that loss, the five points they collected away to Benetton and the Cheetahs would have been deemed a superb haul. Now Connacht have ground to make up. It will not be easy with Edinburgh next up on March 24 at home, followed by a crunch away trip to the Ospreys.

However the tour to South Africa has demonstrated the growing maturity of this squad who came so close to becoming only the second team this season to beat the home side in Bloemfontein. Glasgow having surprised with a three-point win in October.

A sequence of questionable and confusing refereeing decisions ultimately led to the Cheetahs posting a 79th minute penalty to maintain their push for a semi-final place. Yes, Connacht were under the cosh when they need not have been, but was their ability to halt an impending maul from a line-out that eventually led to the penalty legitimate?

Connacht will have reviewed that since, and added it to the long list of lessons this season.

“We have to take this.” said Keane, of the heart-breaking defeat. “There is a lesson or two in there, and there is some difficult stuff we will have to deal with. I am not happy to lose.

“We didn’t come here to make up the numbers. We came here to give our best and do our best, and probably for 95 per cent of the time we did, and then we lost in the last few minutes. It is gut wrenching for everybody to come this far and fall on that hurdle.”

Connacht surprised the South Africans with their cohesiveness and ability to adapt to the conditions. They played intelligently, kicked more judiciously, attacked with width, produced three tries, dominated the second half, and produced a superb defence.

Peter Wilkins’ defence system played a key role in restricting the Cheetahs to two tries. Known for running hard with the ball in hand, the Cheetahs relied instead on the boot of outhalf Niel Marais to kick four penalties. A compliment to Connacht’s defensive prowess which will need to be reflected in their league standing next season.

Given that Connacht had only one third of possession after the opening quarter, a second try from man of the match Matt Healy had them trailing by a single point, 13-12.

There were many big performances. Not least from Sean O’Brien, John Muldoon, and hooker Tom McCartney whose work at the breakdown was rewarded.

And the tries were well worked, scrumhalf Caolan Blade on the wrap with Pita Ahki sucked in the defence allowing Tiernan O’Halloran to supplied Healy out wide.

Within two minutes of the restart outhalf Jack Carty had put Connacht ahead, and his ability to spot a mismatch in the cover, provided the space for Eoin Griffin to power home for a 25 -16 lead after 57 minutes.

Connacht will not be happy having let the Cheetahs back in so easily, and from turnover ball, the dangerous Craig Berry supplied Sibhale Maxano for the try, which Marais converted.

Thereafter it became a power game from the Cheetah’s pack which Connacht repelled until the last minute.

“We fluffed a couple to extend the margin and make it mentally tough for them,” said Keane. “We had them on the ropes and were doing really well, and if we had nailed that, we would have won the game.

“Some of the things we did were really good – the set piece try was a cracker – but we didn’t handle the pressure terribly well, and we coughed up some ball. Had we maintained the ball, I think we would have won the game.”

“One thing I know about this group is that we will learn from it, and we have plenty of other games to play for, plenty of other things to aspire to, and we will just let the cards fall as they may. We are not looking forward, not looking at positions or finals, taking it one game at a time. We have had a great tour, apart from losing the game in the 79th minute, so it’s been good, good for us.”