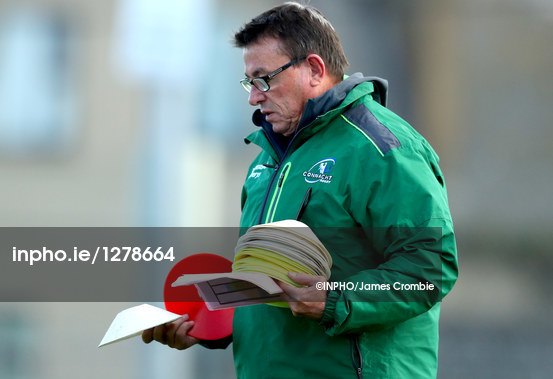 Less than ten months after he arrived in the west of Ireland, Kieran Keane’s tenure as head coach of the Connacht rugby team has come to an abrupt end. Ironically, his final game in charge was a record breaking home win over Leinster but that did nothing to change his faith.

It is understood that results overall were not a key factor in Monday’s decision – even allowing for the clear regression in terms of PRO14 positioning and wins during this campaign. The exact reasoning seems to have been more complex and as a result it will be hard for outsiders to parse.

What we know for sure is this, Kieran Keane was hired on a three year contract in February of 2018 and hailed as a perfect fit to follow in the footsteps of Pat Lam according to Connacht CEO Willie Ruane at the unveiling press conference.

“Kieran is a highly experienced Head Coach with a winning track record and a proven ability in identifying talent and maximising the full potential of that talent. His ambitious and exciting brand of rugby is also consistent with the way Connacht Rugby and in particular our players, want to continue to play the game into the future.” Ruane said at the time.

While the announcement of his hiring came early in the calendar year, his arrival came late in the pre season programme due to his commitments with the Chiefs in Super Rugby.

This is often an accepted reality when hiring someone from southern hemisphere rugby but it certainly didn’t help in terms of the aim to hit the ground running and left organisation and management playing catch up. Connacht lost five of their first six games.

From the outset, Keane proved somewhat unusual in his dealings with the press, proving sparky and combative in post game press conferences. It was easy to establish that this was more of a personality trait than any sort of calculated tactic but it certainly left many a little puzzled. The last gasp home defeat to Cardiff in round two served to underline his unconventional tone and to that end his postgame television interview went viral, serving only to underline the early season issues for the team.

It is understood that even from this early stage, the connection between head coach, staff and players failed to develop and this lack of cohesion remained throughout the campaign. This seems to be where the bulk of the reasoning behind the decision emanates from, which only serves to underline how complicated the story will be once the dust settles.

In contrast to what the feeling might have been inside the camp, Kieran Keane is likely to feel that there was cohesion behind the scenes and his long term plan was on track, perhaps pointing to sparks of good play during the campaign in the victories over the Munster, Ulster and Leinster and narrow defeats away to the Cheetahs and Leinster.

However, Keane and Connacht clearly had different views on what his overall role should be. While Ruane spoke clearly about his ability maximise talent and produce an exciting brand of rugby when he arrived, it seems that the branch fully expected him to merge that task with one where he would see him get out into the community and build on the bond with supporters and young players that had been developed under Lam.

Whether or not Keane saw this as part of his remit is probably in dispute but the signs suggest that the on field tasks were his main priority to the point where nothing else mattered in his first year.

The home quarter final defeat to Gloucester, combined with a press conference display from Keane that seemed out of sync with the prevailing mood of those following the team, only served to dampen the mood further. While Keane was genuinely enthused about the bigger picture, his failure to grasp the sense of disappointment with the earlier than expected exit from the competition didn’t sit well with many in the province.

By early April, the team were in disarray, a shapeless and uncommitted effort in Swansea against the Ospreys highlighted the lack of cohesion. The on field bickering among players suggested at that point that all was not well in the squad. The players themselves are perhaps fortunate that a lot of the heat has been taken off them for displays like that now that the coach has been removed from his role.

Keane criticised his squad after the Ospreys game for struggling with the fundamentals, his forwards coach Jimmy Duffy openly disagreed with that suggestion at a press conference three days later and by the following weekend in Glasgow, Keane spent the pregame warm-up standing on his own, leaning against the posts, while the rest of the management huddled together on half way. The optics spoke volumes.

The excitement and drama around John Muldoon’s last game changed the tone last week and Keane spoke with his usual honesty along with some self awareness thrown in for good measure, as he alluded to some of the challenges that had come from his lack of experience in European rugby and openly accepted that the inconsistency of results could not be ignored.

Even up to Saturday evening, after the 47-10 victory over Leinster, Keane didn’t show any signs of a man who expected to be departing the following week, although the change of tone suggests he may have felt the pressure building.

So here we are then, just under 18 months on from that November day when Pat Lam announced his departure, Connacht remain stuck in neutral. Connacht took a punt on Kieran Keane and there’s no denying at this stage that it didn’t work. Their ability to acknowledge and learn from the mistakes they made could determine whether the decline continues or a recovery begins.