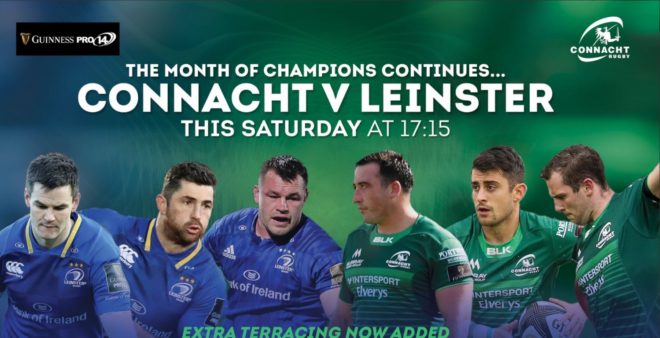 The battle lines are drawn for the first Pro14 interprovincial of the season when champions Leinster arrive in the Galway Sportsground on Saturday (5.15pm ).

The Pro14 and European champions will be in no mood to be overpowered by Connacht for a second successive fixture, having lost 47-10 in the final game last season.

Already Leinster’s Cian Healy has stoked the flames, suggesting John Muldoon’s conversion of the final try in his last game at the Sportsground was “disrespectful”, while Luke Fitzgerald not only agrees, but claims there is “real hatred” building in Leinster for Connacht.

Whether just distasteful rhetoric to ignite the emotions and unsettle, Connacht will need to focus purely on themselves and their game because whichever team Leo Cullen brings to Galway, Connacht’s task will be colossal.

Despite that victory last season, it did not halt Leinster’s march to another title, and understandably they are the bookies’ favourites once again. As a result Connacht forwards coach Jimmy Duffy says Connacht need to remain focused on what they are good at.

“Sometimes you can lose focus when you play teams like Leinster – they have massive quality, are in a good space and they are playing quality rugby, so for us it is important to focus on ourselves, areas where we need to be better, and reward the stuff we have been good at.

“The reality is you have to work very hard against champions, and on Saturday we are playing the Pro 14 and European champions, an extremely serious outfit that demands the utmost respect, and we will prepare for a huge battle.

“It is easy to take the eye off the ball, and the reason we have been competitive is because we have been focusing on what we are good at.”

For the first time a full house of 8,000 plus fans will throng the Sportsground, although Duffy says Connacht need to treat it like any other match.

“It’s an interprovincial at the end of the day, but it is also one of 30 games we play this season, and that is something we have to be focused on.”