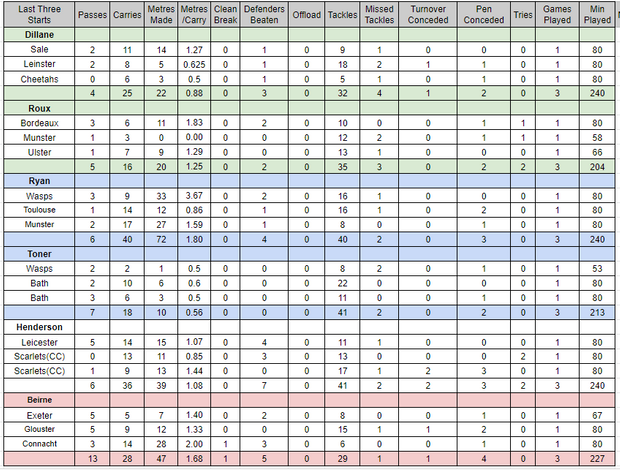 With the 6 Nations (6N) starting this weekend we decided to look at how Connacht second rows Quinn Roux and Ultan Dillane stack up with their provincial rivals in the Ireland camp.

We took stats from the last three starts for Munster’s Tadhg Beirne, Ulster’s Iain Henderson, Leinster’s Devin Toner and James Ryan and compare those stats with Roux and Dillane.

The main stats we look at are carries, meters made, meters per carry, passes and tackles.

Ball in hand
Ryan comes out top of the pack some very impressive stats in ball in hand with 40 carries for 72m giving an average meters made being 1.8m per carry.

Beirne is second in this table with Roux in third and Dillane in fifth.

It will be interesting to see how Roux and Dillane are used with Ireland as they are used more as enforcers with Connacht these days with Connacht back row been given more carrying roles this season.

Tackles
Toner and Henderson top the charts here with 41 tackles each Ryan isn’t too far behind on 40. Roux(35) and Dillane(32) also show they are putting in the hits for their province.

Beirne sits top of this pile showing that he can do more than just carry well on 13 passes, Roux(5) and Dillane(4) are down the bottom of this table but I believe this is down to the change in Connacht’s tactics this season.

Caps
With Beirne(4 caps) and Henderson(42) ruled out for the start of the 6N it gives Dillane(11) and Roux(7) a chance to add to their international caps.

Both bring something different to the party. Dillane seems to be coming into form just at the right time and will get through a good amount of carries while Roux is a great scrummager and has an eye for the line scoring twice in the last 3 games.

Roux got the nod for England, I believe due to his bulk and his ability to solidify set pieces, but I think that Dillane will get picked for the Scottish match due to his dynasim around the pitch.