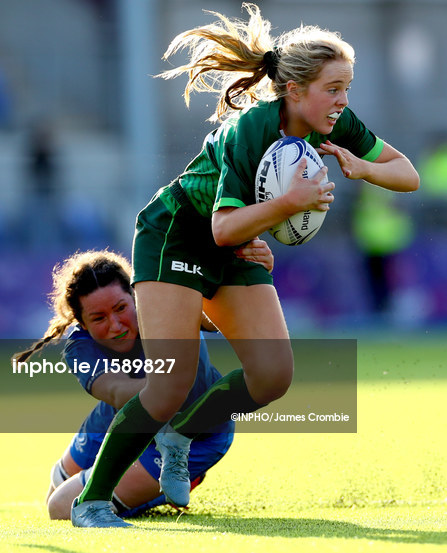 It was a tough first out for a young Connacht Women’s team and their new coach Brian McClearn at Energia Park in Dublin in the initial round of this season’s Women’s Interpros.

The score board doesn’t fairly reflect the commitment and desire shown by the women from the west as Leinster were clinical in taking every opportunity that came their way, while the naivety of the young Connacht team in their decision making and skill execution prevented them from breaking through a well drilled Leinster defense.

Early nerves saw Connacht concede territory and possession that led to a penalty. Leinster then caught the visitors defense unawares with a quick tap and No.8 Hannah O’Connor crashed over an unconverted try after 3 minutes.

A dominant scrum brought Connacht back into the game with a slew of penalties. Connacht’s 18 year old debutant out-half Maebh Deely expertly kicked two of these penalties in a swirling wind on the 10th and 18th minutes to briefly put Connacht into a well deserved lead.

However a knock-on directly from the kickoff after the second Connacht score gave Leinster an attacking scrum on the 22. O’Connor did a phenomenal job of picking the ball up from a rapidly retreating scrum and tore into the Connacht defense making huge yardage. The ball was quickly recycled and moved expertly across the back line to Grace Miller, sister of Connacht player coach Alison, who dotted down under tremendous pressure to regain the lead for Leinster on 19 minutes.

Two minutes later former Connacht player Sene Naoupu made a glorious break, drew in the cover defense and gave a try scoring pass to scrum half Alisea Hughes who outstripped the scramble defense to score under the posts from the halfway line. 21 minutes on the clock and Leinster led by 17 points to 6.

Connacht worked extremely hard to get into good field position as the half wore on, winning the penalty count 9-3, but a malfunctioning line out prevented them from closing the gap, leaving the reigning champions with a 17-6 halftime lead. The visitors came out with all guns blazing in the second half but they could not break through a tough and clever Leinster rear guard.

The injury to powerful second row Denise Redmond on 56 minutes sucked any momentum from Connacht and Leinster capitalized almost immediately with a try from a line out maul by another former Connacht player, Niamh Ni Dhroma, to make it 22-6 with 20 minutes left on the clock.

A yellow card for a dangerous tackle by the Leinster fullback Larissa Muldoon on 65 minutes gave Connacht a ray of hope but a dogged 5 minute goal line stand led to a length of the field intercept try for the home team by Meabh O’Brien to kill the game off.

A try with the last play of the game by Michelle Claffey against very tired visitors put a gloss on the score for Leinster, leaving the final score at 34-6. Connacht play Munster, who defeated Ulster 36-12 in the other interprovincial match played yesterday, at the Sportsground next Saturday at 3pm and they will be looking to repeat their famous victory of 2 seasons ago over their southern rivals, it should be a craicing match.

Alison Miller spoke to Craggy after the match with her thoughts on the defeat.