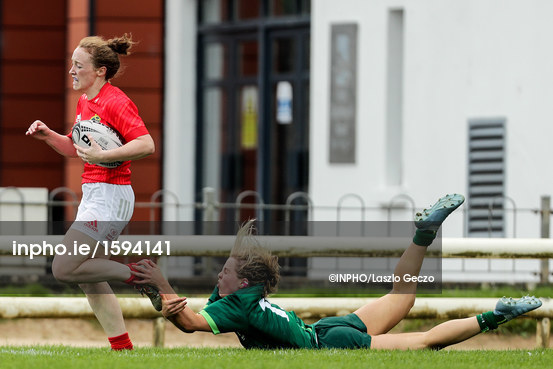 Connacht lost their second match in a row in the Women’s Interprovincial series after Munster outmuscled them in the Sportsground last Saturday. There was perfect weather in the Sportsgound, not a breath of wind, with mild temperature and a beautifully manicured pitch for the match.

Munster got off to the perfect start when scrum half Christine Coffey pealed off the back of a driving maul, shrugged off a poor tackle and scampered in unopposed under the posts to score the visitors first try of the match. Claire Keohane converted.

It was a day dominated by scrums, there were over 20 in the match, as both defenses applied a lot of rush pressure on their opposite numbers.

The next score came against the run of play when Munster turned a ball over inside their own 22, swiftly moved it wide, with more than a hint of a forward pass involved, to speed wing Laura Sheehan who scorched up the sideline, executed the most perfect of side-steps to leave the cover defense sprawled before touching down in the corner for a tremendous try.

Connacht got themselves onto the score board 4 minutes later when a brilliant piece of attempted poaching from No. 8 Alex O’Brien ensured the ref gave a penalty for holding onj and presented ouhalf Maeve Deely with a kick directly in front of the posts, which was duly converted.

That score gave the home side more confidence in possession as they grew into this game, but solid Munster defense kept them at bay until right on half time when Munster fullback Eimear Considine, who was having a standout match up to that point, was sin binned for a high tackle on her opposite number Aoibheann Reilly. Deely sloted the kick and the ref blew for half time.

The change of ends didn’t change the stop-start nature of the game as both sides struggled to implement their game plans.

Connacht were showing lots of endeavour but only really looked dangerous when getting the ball to Ali Miller on the wing.

The Women from the West were dominating the third quarter of the match up to the point that Ali Miller got isolated when almost making a break through. Munster turned over the ball and got it to Sheehan who left everyone in her wake as she bolted up the sideline to score a second long range try.

Poor handling was killing Connacht as every time they got into a good position and when Munster brought on fresh legs from the bench, the tide turned completely in their favour.

Ireland captain Ciara Griffin, coming on to play her first match since getting injured in the 6 Nations earlier this year, made a huge impact as the Women in red turned the screws. She ran a superb line to break through the first line of Connacht defenders and expertly offloaded to the onrushing Rachel Allen, who scored Munster’s third try with less than 20 minutes remaining.

Munster dominated the rest of the match as they went looking for the try bonus and it eventually came when Ciara Farrell battered over under the posts with less than 5 minutes to go.

It was a disappointing second defeat in a row for the Connacht Women, but there were definite signs of improvement from last weeks display as the very young squad learn how to play at this level of rugby.

It’s up to Ulster next week and a chance to record their first win of the season prior to the semifinals the following week in Dublin.