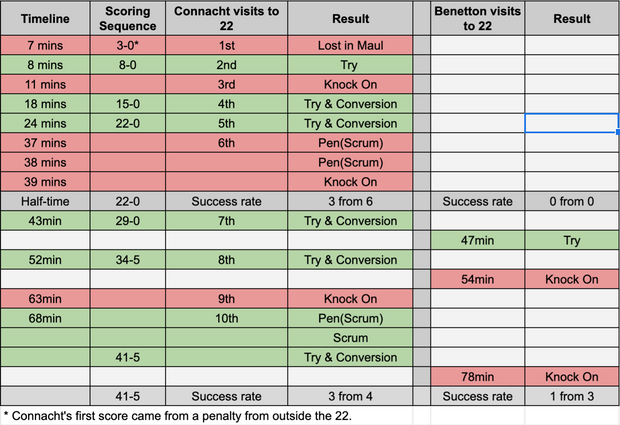 Not only has the world cup taken the best players to Japan it has also had an impact on the quality of stats that are available to us. So we have a slight regurgitation of the Scarlet’s match stats report for this week.

There was a marked increase in Connacht’s ability to take scoring opportunities this week when in possession in the opposition 22 compared to the match against Scarlets.

In the first half, Connacht managed a 50% return rate by converting 3 from 6 opportunities, and although the second half looks more impressive at 75% success rate, Connacht had 2 less visits to the opposition 22.

Connacht defensive coach Pete Wilkins will be very happy this week with the performance of his defence. They stopped Benetton from entering Connacht 22 at any time in the first half. A feat Connacht only managed once in the Sportsground last season, coincidently it was against this weeks opponents the Dragons.

In the second half, Benetton were limited to 3 visits only converting 1. Overall, the Italian side had a 33% success rate in the Connacht 22, which is a 7% defensive improvement by Connacht from the last time Benetton played in the Sportsground in March.

From a player performance point of view, there was a couple of standout performances worth mentioning.

In the forwards, Gavin Thornbury led with a team-high 17 tackles to go along with his 2 lineout steals and general all-round good performance.

Kyle Godwin was the stand out back making 11 tackles, also running 81 meters off 9 carries that included his superb try.

The visit to the Dragons, who only have 4 players at the Rugby World Cup, will be a good litmus test as to where this Connacht team are at this early stage of the season.

The home side will be boosted by their first away win in 4 years having just beaten Zebre and also by the fact that Connacht have failed to win at Rodney Parade in their last two visits.

A win for Connacht will keep them within touching distance of the playoff spots and boost their confidence prior to the visit of the high flying Cheetahs in 3 weeks time.