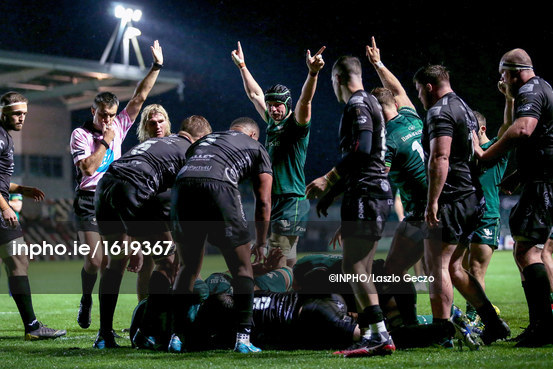 Two out of three ain’t bad for starters. Bonus-point wins over Benetton Treviso and Dragons have taken some of the sting out of Connacht’s opening defeat to Scarlets in Wales as the new season’s PRO14 shuts down for a week.

The latest win by 38-14 was a first in Wales since overcoming the Dragons four seasons ago, and their biggest winning margin at the Newport venue. A notable victory, it is also an early reminder that Connacht can create a successful platform in Andy Friend’s second year in charge, while also mindful of the quality of opposition faced heretofore.

Certainly Treviso have their excuses, missing some 17 players on World Cup duty, and Dragons can point to difficulties adapting to Dean Ryan’s new game plan that after a frantic opening 20 minutes simply dissipated in the face of a well oiled Connacht pack. It was certainly helped by a growing halfback pairing of which rookie outhalf Conor Fitzgerald, in his third outing, picked up the Man of the Match award, in addition to some hard running from the three-quarters.

Now, sitting second in Conference B, behind the unbeaten Scarlets, the team can take a brief breather. Those three opening fixtures were just the appetiser, a taste of the main course ahead – some 13 games on the trot which will test and probe the depths of Connacht’s squad as the World Cup players resume duty for their clubs.

And already Connacht is facing injury worries as the Dragons’ victory came at a price. Prop Paddy McAllister, who needed to be stretchered off the field, suffered a knee injury and is awaiting results of a scan to determine if surgery is needed, while fullback Tiernan O’Halloran, replaced within seven minutes last weekend, has already undergone surgery on his knee, but it is yet unclear how long he will be sidelined. Try scorer Matt Healy was taken off with a back spasm, but is expected to be fully fit. Add in Colby Fainga’a and Eoin McKeon who are still sidelined, and it is fully expected Andy Friend will continue to dip into the Eagles as he has done twice already this season to give the youngsters a real feel for the professional team.

Understandably Friend was delighted to have secured a second bonus-point win, particularly coming after that poor opening display in Swansea.

“We had three good wins in pre-season, stumbled against the Scarlets, and have picked ourselves back up. To come to Newport and get five points was very pleasing.

“This is my fourth visit to Wales and we’d not had a win, so we knew we had to try to mix it up a bit. We adopted a different tactic, we got here late and called it the smash and grab tactic,’ get in there grab the points and get out’, so maybe we might do it again.

“We were up against a Dragons team under a new coaching regime, they were brilliant the previous week against Zebre, and we know what happened with us there last year with a 6-5 victory, it’s not an easy place to get points. So I think we did well, but I didn’t think the scoreline would be as one-sided.”

Following Dragons’ big win over Zebre the previous week, there was huge expectation from the home crowd at Rodney Park on Friday night, and it looked likely the team would deliver after an opening 20 minutes in which they took control, starving Connacht of ball, and putting the defence under real pressure. A disallowed try and a missed penalty were not the rewards Dragons wanted until Tyler Morgan cut through the cover for the opening try, with Sam Davies adding the conversion.

Cue Connacht’s riposte – a superb performance from a maturing pack, complemented by a solid kicking display from Conor Fitzgerald. A penalty to touch provided the opening occasion and the pack took the opportunity – lock Gavin Thornbury, aided by Quinn Roux, driving over for a try after 25 minutes with Conor Fitzgerald ‘s conversion levelling the scores. Within six minutes Andy Friend’s side had added another 10 points. Fitzgerald potted a penalty, before Matt Healy finished off an expansive move in the left corner, kicking ahead after a nifty pass from the Connacht outhalf for a 17-7 lead.

There were a worrying 10 minutes when John Porch, making his PRO14 debut, was yellow carded for a late mid-air collision with Ashton Hewitt just before the half-time whistle, but Connacht rolled up their sleeves and regained control.

Finlay Bealham touched down from a forward drive for a third try, replacement lock Cillian Gallagher bagged a fourth, and a fifth from replacement Kieran Marmion to sealed a dominant performannce – Dragons’ only second-half score an 80th minute try from Taine Basham.

The result, a reward for playing “clever rugby”, produced the necessary win with resulting confidence and momentum. While there are worrying signs for McAllister, Friend is blessed with some dynamic options in the front row, which was led in Newport by evergreen Tom McCartney. Add to that a second row of Roux, Thornbury and Ultan Dillane, and Connacht could count their blessing they missed out on Irish selection. Fainga’a and McKeon’s absence has been helped by an injury free Eoghan Masterson, Paul Boyle, and Jarrad Butler, who continues to lead by example. Halfbacks Kieran Marmion and Caolan Blade have all the attributes to boss proceedings, giving necessary space for young Conor Fitzgerald to blossom, while Kyle Godwin’s leadership in midfield, partnered by the strong running of Peter Robb and Tom Farrell, is a huge positive without the talismanic Bundee Aki. Add in the versatility of Stephen Fitzgerald and Darragh Leader, and Connacht look capable of adding a few more victories, which will be necessary in this next challenging period.