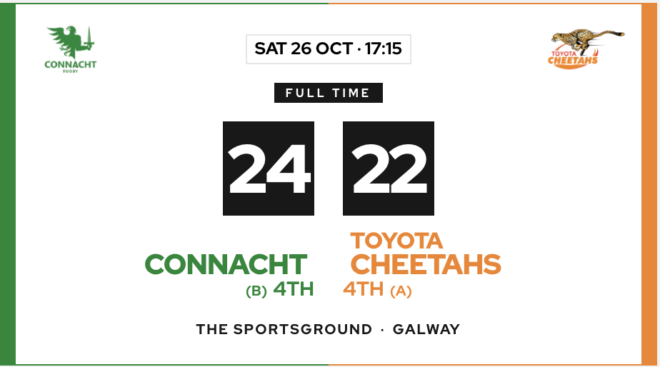 Tom Farrell clapped his hands twice as he stared at Caolin Blade, the scrum half had emerged with the ball from the base of a ruck inches from the try-line with the game on the line and the unbeaten Cheetahs leading by three.
The forwards had done their job and the time was now right to set the backs free, well one back in particular, the man who had turned this game on its head in just ten short minutes.

Farrell didn’t disappoint with his final contribution to the contest. He showed to pass further wide but knew he had the beating of the men in front of him and from five metres, the replacement centre powered over for the second of his two quick fire tries to turn a ten point deficit into a glorious bonus point victory.

It was the last play of a truly captivating contest between two fast paced sides which ebbed and flowed from the first minute. For the 14-man Cheetahs, it was an unforgivable collapse, for the men in green it was a special Sportsground night akin to wins over Glasgow, Wasps and Toulouse in the years of Pat Lam.

The kind of nights that have probably been missing in the past 12 months despite an impressive run of consistent solid results at the venue.

In front of a vociferous and charged up home crowd, Connacht had gone through a rollercoaster of an evening, from leading by nine at half time, to trailing by eight by the 70 minute mark, creating the perfect setting for a show-stopping finale.

Since arriving as head-coach in the summer of last year, Andy Friend has had plenty of standout moments, reaching the PRO14 play-offs being the highlight, some neatly carved out away wins against the likes of the Cheetahs, Bordeaux and Ulster.

At home there have been some high points, like beating Cardiff to secure a play-off spot and the hard fought victories over Sale and Ulster at Christmas too, but Saturday’s come from behind victory over the visiting South Africans felt different.

Connacht have won 11 of their last 12 competitive encounters at the Sportsground, stretching back to October of last year with the sole setback coming in the Christmas home defeat to Munster.

Yet the heart stopping, fist pumping nights just haven’t been a feature under Friend. His sides have been methodical at home, satisfyingly so in fact but up until now at least, they hadn’t yet shown an ability to really rescue a game that was slipping from their grasp.

This was different and the Australian had taken note afterwards. “It’s only my second year here, I’m very aware that historically Connacht don’t win those kind of games. The “oh here we go, we’ve had a good start and now we’re going to lose it.” takes over.

Well, this is a new football team, there’s a new energy around the group and our message to ourselves is if we need to win a tight game, we’ll win a tight game and so to be able to say we’ve done that, is really really pleasing.” said Friend afterwards.

A draw certainly would have been a fairer result. Friend acknowledged as much afterwards and Connacht had the opportunity to take one with the clock at 80 minutes and a penalty in front of the posts, but with a losing bonus point all but guaranteed, instead of tying the score at 22 and securing two match points, they gambled for the full five match points that would come if they could score a bonus point securing fourth try which would win the game.

At half time, they were looking comfortable with a 14-5 advantage after a mightily impressive first half display. Niyi Adeolokun had marked his return to form and the starting line up in rip roaring fashion with a brilliant try and a scintillating break that set up Kieran Marmion for his third try in four games. The boot of Conor Fitzgerald added the conversions and but for a well taken push over try from hooker Joseph Dweba, the Cheetahs had been well marshalled at the midway point.

The second half was a different story, 17 unanswered points in the space of 25 minutes turned the tide in spectacular fashion. The men from Bloemfontein had found the electric form that had seen them thrash Glasgow, Ulster and Munster in their high altitude home during the opening rounds. They now seemed to be translating that into a sea level performance in windy Galway.

Rhyno Smith scored a great try as did Clayton Blommetijies and Ruan Pienaar looked in full control. Connacht were having trouble at the set piece, Finlay Bealham, Quinn Roux and Gavin Thornbury all went off, that took power from the scrum and height from the lineout.

Without a platform, Connacht looked in trouble but for a lively back three that included some superb fielding and counter attacking from John Porch combined with some well placed kicking from Stephen Fitzgerald. Throw in the form of Peter Robb and Kyle Godwin, and Connacht were still alive but only just.

Farrell’s arrival on the scene was marked by a half break and spectacular offload that took Connacht into the visitors 22 with ten minutes remaining, it was here that centre Dries Swanepol opened the door for the home comeback. His moment of madness saw him jump over the ruck and make contact directly to the head of Caolin Blade at the base of the ruck. It was reckless and meant a red card.

That opened the door and Connacht stormed through. First with a lineout, catch and drive that saw Farrell latch on to the back and get the touchdown. The conversion was missed so the gap was three, but the momentum was now all with Connacht and the last attack was set in motion via some more indiscipline from the Cheetahs to give the men in green field position.

The visitors were not happy with a penalty decision during those late scrums underneath the post that led to the try. They looked to have a turnover but Ben Whitehouse correctly punished Venter for driving at an angle.

That was the killer blow. Connacht weren’t going to be stopped and a third bonus point win in a row duly followed. As a result, the westerners sit joint top of their conference. Confidence is growing.