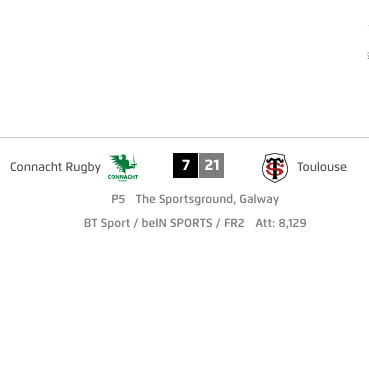 NO fireworks, no heroics and no drama.

Connacht took their leave from the Champions Cup competition on Saturday in fairly underwhelming fashion. In fact, they waited for their biggest home crowd and for the visit of their toughest opponent to serve up their most error strewn effort of the campaign, as a clearly clued in and determined Toulouse left Galway with their unbeaten record intact and barely a bruise on them.

Bar a brief spell early in the contest, when Connacht took the lead, Toulouse completely controlled the game for 70 minutes and but for some poor discipline in those closing stages, they probably should have secured a four-try bonus point.

Those final ten minutes, however, also proved to be the most disappointing for the hosts, as despite having two extra men on the field, they produced a litany of basic errors bordering on the calamitous.

In fairness to Toulouse, they know Galway well and the lessons since that first visit have been passed down through each group it seems, because they came prepared for all the challenges the Sportsground has to offer and dealt with them with ruthless efficiency, managing sin bins, the concession of an early score and some tricky conditions with minimal fuss and maximum force.

Connacht players and management had said they needed a good start and they had delivered with an early defensive stand and then the game’s opening try which came from sustained patient attacks on the visitors line, where the lineout, maul and scrum all stood up to the tests and got the better of their much bigger opponents.

Twice Toulouse pulled the maul down going over the line, the second time tried referee Luke Pearce’s patience too much, leading to him awarding a penalty try and a yellow card for second row Joe Tekori. So having gained field position from Jack Carty’s kick block and chase on half way, they were now 7-0 up – without the need for a conversion as per the new laws on penalty tries introduced last season.

The sold out Sportsground was a hive of noise. That changed six minutes later when Colby Fainga’a joined Tekori in the sin-bin for a dangerous tackle. It appeared a harsh call as centre Sofiane Guitoune clearly fell awkwardly into him causing the collision. The slow motion replays told a more gruesome tale and the decision not to look at the incident again in full speed seemed to work against Connacht.

The extent to which that decision affected the game is probably minimal as Toulouse were starting to dominate the line breaks in and around the fringe of the ruck area where Antoine Dupont was key with his brilliance. The 23-year-old has already amassed 20 caps for his country and is an out and out world class operator. He proved far too much for Connacht.

Toulouse scored two tries before half time playing into the wind. Jerome Kaino the veteran 83 capped New Zealander got the first during that sin bin and Julien Marchand drove over at the back of a maul for the second, while the superb Thomas Ramos at full back tapped over both conversions.

The second try came just before half time and the third arrived four minutes into the second half to all but kill the game as Connacht crumbled under the pressure.

That third try encapsulated a night of panic and indecision from the hosts. It was Carty’s mistake on a clearance kick from inside his own in goal area. He appeared to have had enough time after some great work from Bundee Aki and Paul Boyle to avert a try and get Connacht well clear of the try line, but he was blocked down and the loose ball was pounced on by former Connacht player Pita Ahki.

The game was up for Connacht in all respects by the hour mark as they had managed just 25% of possession and even less territory during a one sided match. Just their determination in the tackle area and their consistency and effectiveness at both scrum and lineout warranted any sort of praise, but the sheer size and power of their opponents proved far too much to handle.

In one sense, there isn’t a whole pile of shame in that. Toulouse are an awesome force in European rugby again, gunning for Leinster, Saracens and the rest in the race for the title. They are the reigning TOP 14 champions too, yet they still weren’t at their electrified best here by any means.

They made 16 turnovers and coughed up plenty of promising positions and those final ten minutes when they were reduced to 13 men should have been more costly. A sin binning for Yoann Huget for a tip tackle and a straight red card for Zack Holmes for a high tackle left them in genuine danger of losing the game with six minutes left, but despite two visits to the Toulouse 22 and a subsequent break with a six on two overlap, Connacht couldn’t score.

The low point was probably being pushed back and turned over on their own scrum under the posts when a quick tap penalty would have been the logical decision. Connacht were beaten by a better team and that’s no surprise considering they were lacking form due to numerous players only just returning from injuries.

Yet their inability to properly turn promising attacks into points was at its most glaring in those closing stages and that might be what turned an underwhelming effort into one that they simply could not hold up as good enough under any circumstances.

This competition has a habit of uncovering some home truths. Connacht’s were laid bare on Saturday.