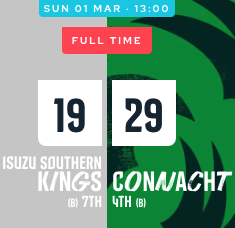 TAKING on the Southern Kings in their home of Port Elizabeth on the southern coast of South Africa is an enormous logistic and mental challenge at the best of times and Sunday was no different for Connacht.

The visitors had to deal with a first half red card, injuries and the warm weather conditions to secure a vital bonus point victory in their push for the play offs as they moved within two points of the third place Scarlets.

A perfect start for Connacht saw them burst into an early 14-0 lead but the game’s most notable moment came after 15 minutes of the half when Peter Robb was shown a straight red for leading with the forearm while on a carry and making contact high on a Kings player.

The decision was undoubtably harsh but either way, it left Connacht in deep trouble. Matters were compounded soon after with a yellow for Kyle Godwin and the home side notched two tries while Connacht were down to 13 men.

At 14-all, Connacht could have wilted and their play off hopes could have crumbled but it was here in the heat of a late South African summer afternoon that the group dug deep and got themselves out of trouble.

Two crucial and ruthless changes to the pack before half time saw Dave Heffernan and Conor Kenny introduced, Jack Carty added a penalty and in the second half Connacht took control, scoring twice more to get the win and the maximum return.

Before the weekend, Andy Friend was well aware that the room for error in this fixture against the struggling Kings was zero.

The good start here on Sunday in 26 degrees of heat at the Nelson Mandela stadium must have settled the nerves of the management team with Colby Fainga’a bursting on to a loose pass and sprinting the length of the field to score under the posts.

It got better on five minutes as Tiernan O’Halloran glided through the defence and showed some neat foot work to score for a 14-0 lead.

However by the half hour mark, the picture was very different. Peter Robb was off, having spent just a handful of minutes on the field as a replacement for the injured Matt Healy. Robb was certainly unlucky to have received a red card, as the forearm contact with the tackler was initially to the chest before slipping up to the neck, but the referee JD Cwengile saw it different and opted for a straight red.

A bad situation got worse as Kyle Godwin went to the sin bin on 25 minutes with the Kings forcing the penalties and Connacht struggling to defence.

Tries for Ungerer and Cronje followed in quick succession to level the scores and that’s when Friend went to his replacements choosing to bring on Heffernan and Kenny for the faltering Shane Delahunt and Dominic Roberts McCoy before half time.

Carty’s late first half penalty had Connacht in front and the out-half took full control with a masterful display of kicking and orchestrating in the second half.

Connacht scored a third try after half time with Carty getting the touchdown in the corner and while the hosts did strike back when Cronje scored his second try of the game, the men from the west secured the bonus point with 11 minutes to go from a penalty try via the dominant scrum.

Next up for Connacht is a home clash against their chief play off rival, the Scarlets, on Friday, March 20.

That should be a test of every aspect of their game and with the breakdown still an issue and discipline suffering in part as a result, they have plenty to work on. For the moment at least, they remain on track.