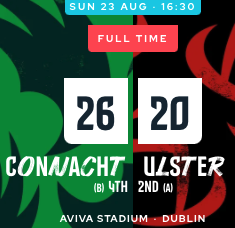 THE Aviva Stadium provided a spectacular and eerie setting for rugby’s return at the weekend.

On a bright Sunday afternoon, Connacht marked a 25 week pandemic enforced pause in the season with a brilliant display of attacking rugby and a thoroughly deserved victory over a disjointed Ulster.

Ulster’s roars and shouts echoed around the stadium from the start. After every tackle, every set piece and every penalty, the men from the north could be heard screaming encouragement on the field.

In hindsight, It was all compensation for some sort of unspoken realisation that they weren’t ready for what Connacht were hitting them with here and this was their coping mechanism.

Connacht didn’t flinch at the mindless energy coming from Ulster. Especially in the early stages when the opposition surged forward and scored a penalty.

The communication levels were perfect from the men in the west, audible only when it was needed. They remained calm and focused at the points in the game where their opponents were in the ascendency, and carefully regrouped when the penalties were stacking up against them before converting scores with ruthless efficiency when chances came their way.

Connacht just have these two fixtures before a six week break, so they need to make the best of them. Ulster and Leinster have a European Cup quarter final to look forward to next month (lockdown dependent) and all three other provinces are in line to make the play-off semi finals in this competition in a couple of weeks. Strange times, so best take it week by week.

This was Connacht’s first game at Lansdowne Road since an inter-provincial with Leinster in 1989. Ulster have had a few visits there for Champions Cup knock out games, including two finals over the years, but the Connacht players will have relished this opportunity.

Ulster have had their big days here since that date, two European finals and a semi final too. Two fantastic first half tries set the tone here.

Connacht built up a lead of 14-6 by half time and while Ulster clipped at their heels during an entertaining second half, Connacht never relinquished the lead and carefully managed and controlled possession during a second half sin-bin period (Johny Murphy had been yellow carded for persistent team infringements) with the score at 21-20 in a spell that underlined their winning credentials.

Andy Friend had gone with some key long standing stalwarts in central positions, Kieran Marmion, Jack Carty and Bundee Aki excelled in the 9, 10 and 12 axis.

Scoring tries and making key contributions throughout. Carty was in top form and all three players must be in Andy Farrell’s Ireland squad plans.

In the pack, Denis Buckley, Dave Heffernan and Finlay Bealham made for a strong and reliable front row and the dominance at set piece proved critical. Lineouts were a shambles for Ulster. Adam McBurney was a late inclusion and couldn’t find his men as Gavin Thornbury dominated with multiple steals to go with an all round brilliant display before his enforced departure through injury after half time.

Ultan Dillane didn’t disappoint either while in the back row the balance looked strong with Eoghan Masterson causing untold damage at six, Jared Butler dynamic at openside and Paul Boyle looking stronger and more imposing than ever at eight. It all added up to a fairly complete display.

Tom Farrell was a constant attacking threat and the new look back three stole all the headlines. John Porch started at full back for only the second time since his arrival to the province this time last year. The former Australian 7s flyer likes the role and he made a strong case to get more starts here.

New signing from Lansdowne Peter Sullivan grew into the contest and had a fine second half Munster loanee Alex Wootton was terrific throughout. If all of that wasn’t enough for Connacht fans to feel positive about, the impact from the bench was beyond good. At just 21 y

ears of age, Jack Aungier is a young tighthead but his reputation is immense and Leinster were rumoured to be so disappointed to lose him. He came off the bench to anchor some important scrums and added a try.

Niall Murray again looked excellent when he came in. The highlight clips from this one will be watched throughout the week on social media. C

arty’s over the top pass for Porch’s try early on is one, while the second try was a magical attack that involved a brilliant offload form Wootton and pure ingenuity from Porch to kick back infield for a supporting Marmion.

The tries after half time were about patience and focus. Bundee Aki, marking his 100th appearance in the green of Connacht, got the first bursting over the line off the back of a five metre scrum with three Ulster players unable to stop him to push his side into a 21-13 lead after Jacob Stockdale had scored for Ulster.

The gap was down to one again when Aungier got Connacht’s fourth try late on, burrowing over from two metres out highlighting both strength and awareness in the process.

By that stage, Connacht had endured the concession of a second try and that sin-bin and were not only still standing but had a actually kept Ulster out of their 22 over a 15 minute period since Nick Timoney had scored for them.

Expect plenty of changes for Sunday’s clash with Munster as Andy Friend has said he wants the majority of his squad to see action.

Caolin Blade, Quinn Roux, Conor Fitzgerald and Tom Daly along with many more will come in. They’ve a hard act to follow but the positivity in training will help them. For Ulster, the road ahead looks bumpy.